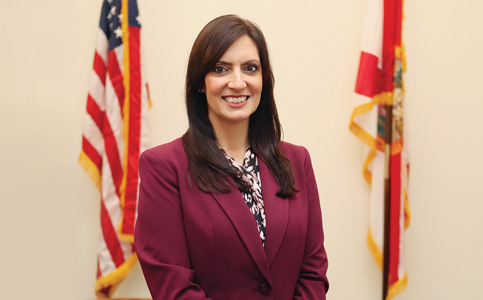 Jeanette Nuñez never expected to go into politics as a career while she was a student at Florida International University. But several decades into a successful and busy healthcare and political career, she is now serving alongside Gov. Ron DeSantis as not only the 20th lieutenant governor of Florida but also the highest-ranking Hispanic woman in the history of Florida politics.

Mrs. Nuñez served in the Florida House of Representatives from 2010 to 2018 and was speaker pro tempore for her final two years. That experience helped prepare her for her  role as the second most powerful person in Florida’s governmental hierarchy, and she hopes to bring issues she’s been working on most of her political career higher up on the priorities list.

“I had an opportunity to work on some really important issues related to particular issues for child safety and well-being. I was very involved in the human trafficking issue and so sat on the statewide council for human trafficking for a number of years and hope to continue to be involved in that issue because Florida ranks number three in terms of calls to the national [human trafficking] hotline, and that’s not a not a ranking that we want to boast,” Mrs. Nuñez said.

“Also issues related to domestic violence. We were able to increase the penalties when acts of domestic violence are committed in front of children. If you look at a lot of the challenges the state has through the Department of Children and Families, our foster care [system], there is a lot of need in that area. I hope to be able to use this platform to continue to focus on issues of child safety and well-being. Also, I worked on transportation issues, keeping our expressway authority accountable to the toll payers.”

Mrs. Nuñez also wants to focus on improving Florida’s school and transportation systems as the state’s population continues to rapidly grow, as well as how the state takes care of its elderly residents, and better educate Florida’s up-and-coming workforce.

Mrs. Nuñez sat down with Miami Today reporter Katherine Lewin. The interview, recorded by Jahmoukie Dayle, can be found Friday at http://bit.ly/2uNHy0Q.