Advertisement
The Newspaper for the Future of Miami
Connect with us:
Front Page » Top Stories » Melreese golf course leasing to Beckham team on fast track 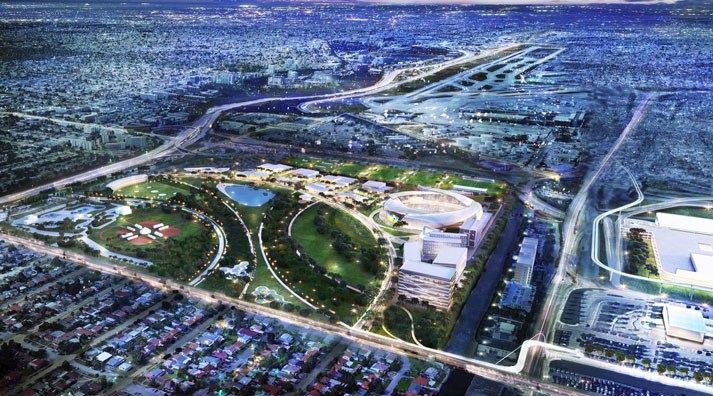 Some Miami commissioners are eager to learn where things stand as administrators negotiate a long-term lease for a city-owned golf course adjacent to Miami International Airport.

A lease would clear the way for David Beckham and partners to build a Major League Soccer stadium on what today is Melreese Golf Course, along with a sweeping mixed-use commercial development, Miami Freedom Park

Commissioner Manolo Reyes, one of two ‘no’ votes last July to place the deal on the November ballot, brought up the Melreese site on Feb. 14. He was hoping to force the hand of City Manager Emilio González, ordering him to bring the final proposed lease to a commission vote before this November’s election.

The two commissioners who voted against placing the deal on the November 2018 ballot were Mr. Reyes and Wifredo “Willy” Gort. Mr. Reyes is up for re-election this fall and Mr. Gort is term limited, so someone else will represent his district. Mr. Reyes wants a vote on a final lease before the fall election, while he and Mr. Gort remain on the commission.

Without a vote, commissioners directed Mr. González to report on the status of lease negotiations Feb. 28, along with a call for a lease before the fall election and that no outside consultants on the deal be hired without commission approval.

He added, “I am up for re-election. Those in favor [of the deal] may use as a tactic: ‘Let’s wait and get this guy out.’”