Advertisement
The Newspaper for the Future of Miami
Connect with us:
Front Page » Arts & Culture » Parking has a warm glow in Miami Design District

Parking has a warm glow in Miami Design District 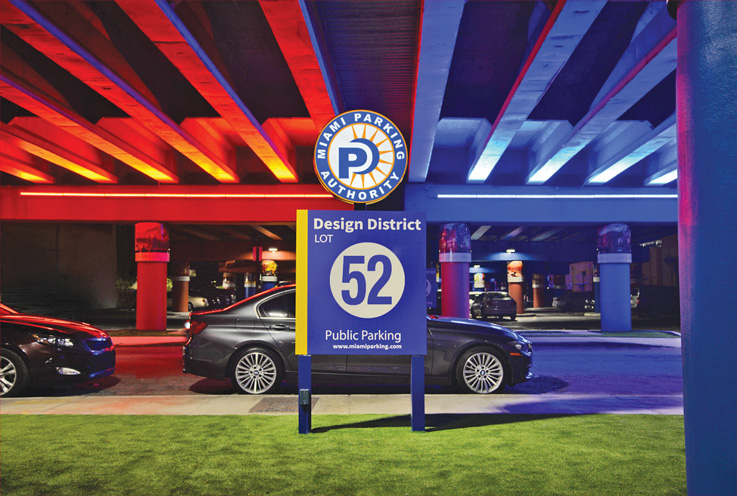 The Miami Parking Authority has hit the switch on bright, colorful new parking lots at the edge of the Miami Design District.

On Tuesday evening, authority officials held a grand opening of sorts for the reborn parking spaces under Interstate 195.

The city’s parking agency is celebrating the re-imagining of the I-195 underpass parking lots into an international urban art installation.

The gathering occurred in Lot #52 on Northeast First Court between Northwest 36th and Northeast 37th Streets.

Nestled between the Design District and Midtown Miami and renamed Zero Mile Marker, this project represents the intersection of parking and art, as seen through the eyes of Italian artist Vito Di Bari and an international team of diverse artists, according to the authority.

Zero Mile Marker is anchored by two vibrant neighborhoods featuring a diversity of land uses, such as luxury retail, fine dining, art galleries and an architecturally-significant context in the Design District.

Built under I-195, connecting Miami to Miami Beach, these underpass parking lots offer opportunities for a unique urban art installation.

With that in mind, the authority commissioned its design to the European firm of Di Bari & Associates, with experience in aesthetically-pleasing, utilitarian concepts in high-density urban centers.

Di Bari & Associates is known for designing cityscapes of the future. The concept of an associated studio brings together artists and designers from five continents to deliver urban concepts that reflect their heritage and diversity.

For this project, Mr. Di Bari assembled eight artists from the far corners of the world.

Mr. Noriega also realizes that the parking sector is dramatically changing as a result of new technology. With that in mind, he says he is focused on the evolution and transformation of the authority, as he sees multi-modalism, technology and smart cities fundamentally changing the urban landscape.

Mr. Noriega said he wants the parking authority to be at the cutting edge of this transformation in order to survive, prosper and thrive.

“A leading-edge concept for the parking world, we envision that this functional facility will also serve as a transformational agent that will stimulate economic vitality, meet consumers’ need for parking, bridge communities and spur economic development,” Mr. Noriega said.

Mr. Di Bari said, “I have decided to utilize the Zero Mile Marker concept as a metaphor of the borderline between the two neighborhoods representing a sophisticated quality of life: design and culture, fashion and art, shopping and nightlife.

“I am an Italian artist and I have always been fascinated by the story of the Roman Empire’s Millarium Aureum – The Golden Milestone. This Zero Mile Marker was the literal origin for the phrase ‘all roads lead to Rome.’ However, this old saying is not quite accurate, as all the streets of the Roman Empire were not leading to Rome, rather they originated from Rome’s Zero Mile Marker.”