Advertisement
The Newspaper for the Future of Miami
Connect with us:
Front Page » Healthcare » Baptist Health’s Miami Beach center a community hub 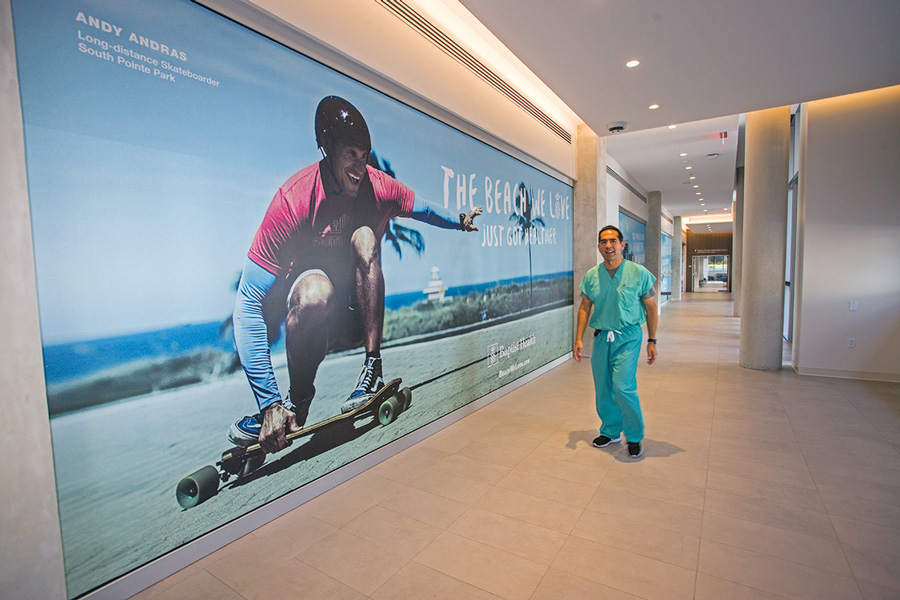 Baptist Health South Florida’s Miami Beach urgent care, diagnostic and outpatient center on Alton Road, which opened in July 2018, has started up several new programs and the volume of patients is “above our projections,” according to Nancy Batista-Rodriguez, the chief executive officer of Baptist Outpatient Services.

Both the endoscopy center and the spine center offering neuroscience and orthopedic services are seeing patients and referring people to the physical therapy program. They opened several weeks to a month after the original inauguration of the urgent care. Tenants for 3,800 square feet of ground floor retail still aren’t final but Baptist is currently speaking to several options, Ms. Batista-Rodriguez said.

The 60,000-square-foot facility offers urgent and primary care as well as physical therapy and services from the Miami Orthopedic and Sports Medicine Institute and diagnostic imaging.

The center is also a community hub where residents meet and participate in events like cooking classes, group workouts, music recitals and health-related activities. Since opening, at least 3,500 persons have attended over 50 events, including 15 educational nutrition programs, prenatal screenings, health-centered Meetups and health fairs, some with complimentary health screenings. They are held on the fourth floor in a large multipurpose room and rooftop terrace that often brings in mobile healthy juice and snack bars for certain events.

“Broadly speaking, in all of our lines of business we are seeing that the volume [of patients] is over what we expected. Both imaging and urgent care are above our projections. Physical therapy has had to add resources because of a very good response from the patient base,” Ms. Batista-Rodriguez said.

“What we’re hearing is that patients are happy they have a choice,” she said. “If you lived in Miami Beach in the past, you only had Mount Sinai… Now they don’t have to leave Miami Beach. It takes a year or two to three years to get a nice momentum, but we’ve definitely seen the curve here faster than expected.”

Mount Sinai Medical Center operated for decades in Miami Beach without significant competition. It originally opposed the Baptist urgent care when it came before city commissioners. The building would create too much traffic and other adverse effects, according to Mount Sinai representatives. But Beach commissioners in July 2015 allowed Baptist to build.

Baptist Health has more than 50 outpatient centers throughout Miami-Dade, Broward and Palm Beach counties, according to a July 2018 press release. The Miami Beach urgent care is four stories high with 175 parking spaces on the second and third floors.

Natural light use was prioritized in the facility’s design, Kricket Snow, associate principal at architecture firm Perkins + Will, previously told Miami Today, and much of the activity usually contained in the center of most medical facilities was purposely moved to the exterior of the building.

“The facility is beautiful… It’s not your typical hospital. We wanted to make it relaxing and more like a spa atmosphere,” Ms. Batista-Rodriguez said. The center has a “one-stop shop mentality,” she said, and always tries to accommodate same-day service when patients come there from primary care.