Advertisement
The Newspaper for the Future of Miami
Connect with us:
Front Page » Top Stories » Dinner Key Marina far from recovered from Hurricane Irma 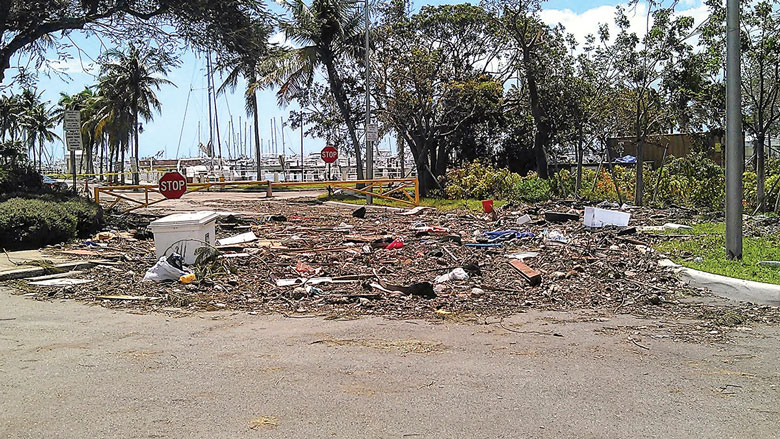 More than 16 months after Hurricane Irma tore up Dinner Key Marina, the City of Miami owned and operated facility in Coconut Grove remains far from its former glory.

It is a slow process, but a major capital improvement project is poised to restore and rebuild the marina in the heart of the Grove.

Currently, city officials are unable to discuss details of the restoration plan as they evaluate proposals sought in a formal request for proposals issued last fall with a deadline of Nov. 29.

The Dinner Key Marina Repairs and Restoration Project is currently under “cone of silence” rules for procurement and city officials aren’t allowed to provide any details regarding planned construction.

A review of the November request for proposals offers a few insights.

Maria Busto, interim marinas manager at Dinner Key Marina, was able to answer a couple of questions regarding current use of the marina and the adjacent mooring facility.

“I can tell you that we currently have about 335 slips occupied, and 77 moorings occupied as well,” Ms. Busto said in an email to Miami Today.

One year ago, Daniel Rotenberg, director of the city’s Department of Real Estate and Asset Management, reported that approximately 60% of the dockage was destroyed in the powerful storm of Sept. 10, 2017.

“We have no detailed information for the vessels themselves, as the owners of the vessels at the marina are not required to provide the damage they incurred,” he said then.

Asked for a comparison of occupied slips at Dinner Key Marina, Mr. Rotenberg had said in January 2017 there were about 580 vessels docked at the marina, and about 250 vessels in January 2018.

At the adjacent Dinner Key Mooring Facility, just offshore at the end of Southwest 27th Avenue, approximately 110 vessels were kept there in January 2017, compared with about 80 one year later, according to Mr. Rotenberg.

The scope of services in the request for proposals begins: “The City is seeking to procure a qualified and experienced Design-Builder to restore and/or replace the docks and utilities that were damaged at Dinner Key Marina by Hurricane Irma in September 2017.”

“The area along Coconut Grove in Biscayne Bay has a long history of waterfront use beginning with the Naval Air Station in 1918, and with the Pan American Seaplane Terminal from 1932 to 1945. The original terminal building is still utilized as City Hall,” the document reads.

Other hurricanes have impacted the marina.

Dinner Key was extensively damaged by Hurricane Andrew in 1992. The marina was repaired/restored after that hurricane, and most of the shore power pedestals and electrical system were replaced.

The marina was again damaged by Hurricane Wilma in 2005.

The eastern end of Pier 3 was reconstructed along with the gates/lock systems at the entrance of each pier. In addition, the original timber decking (covering the utility chase) was replaced with fiberglass grating in 2006 time frame.

Additional improvements have been completed at the marina including maintenance dredging and more recently the sewage pump-out system was replaced.

Hurricane Irma was the strongest observed hurricane in the Atlantic in terms of maximum sustained winds, and it was the most intense hurricane to strike the continental US since Hurricane Katrina in 2005, the document says.

After causing extensive damage throughout the Caribbean as a Category 5 storm, Hurricane Irma impacted the Florida Keys at Cudjoe Key on Sept. 10, 2017. The hurricane again made landfall in southwest Florida in the Naples area.

A peak storm surge hit Dinner Key at 9:51 p.m. Sept. 10. The hurricane submerged the docks and portions of the adjacent waterfront, subjecting the area to waves along with the high winds and heavy rainfall.