Advertisement
The Newspaper for the Future of Miami
Connect with us:
Front Page » Real Estate » 20-story residential tower to be build in shadow of Metrorail

20-story residential tower to be build in shadow of Metrorail 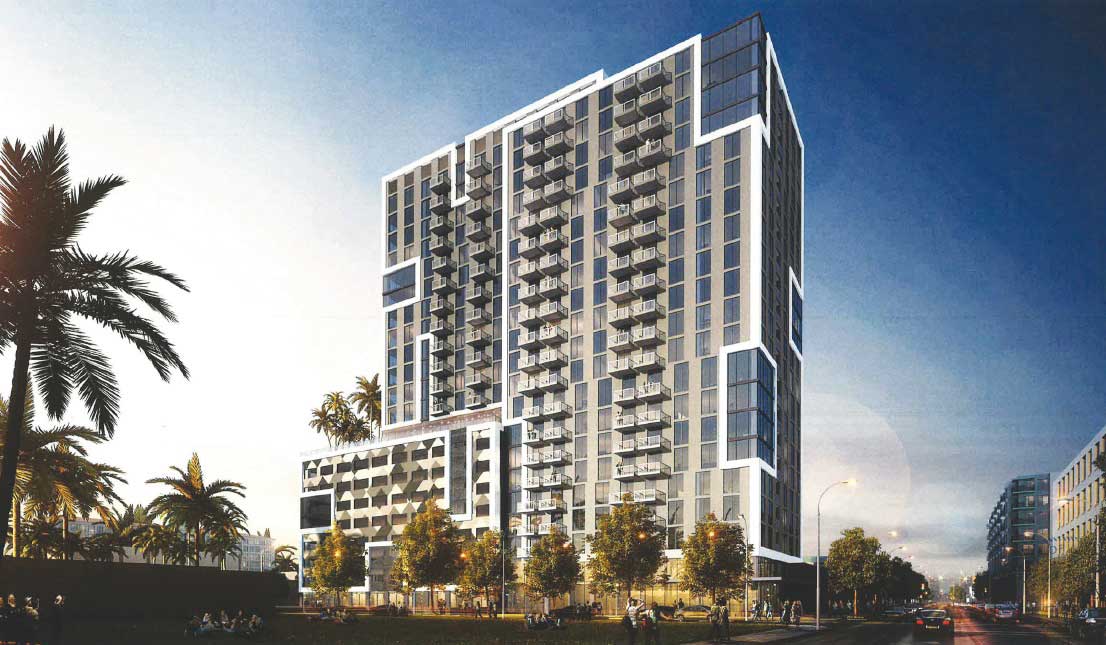 A developer plans to bring a residential building with 10,000 square feet of amenities to a fast-growing area of Miami, in the shadow of one of the busiest Metrorail stations.

The project was reviewed Jan. 16 by the city’s Urban Development Review Board, which recommended approval with one suggestion regarding the potential for additional retail uses at the building.

Carlos Lago, an attorney representing the owner-developer, said the site is in an area that was originally an industrial warehouse district but is transforming into an active residential neighborhood.

The property is just north of US 1, south of Bird Road and east of Ponce de Leon Boulevard and the City of Coral Gables.

The area had grown to include warehouses and car dealerships, some of which remain, he said.

But in the last half-dozen years, he said, several large apartment buildings have risen there, bringing improvements to streets and sidewalks.

“This area has really transformed,” Mr. Lago told the board.

An area that was not in best condition is today thriving just a block from the county’s Douglas Road Station for the elevated Metrorail public transit service.

“This area is prime for redevelopment,” Mr. Lago added.

Miami-Dade County government itself has entered into a major public-private partnership to build a large mixed-use project incorporating the Metrorail station.

Shipping Avenue Apartments is designed by architectural firm Arquitectonica, and founding principal Bernardo Fort-Brescia offered some details of the project.

A site plan shows the building rising just north of Shipping Avenue, with a 15-foot-wide alley on the north and the entrance to the parking levels off of Southwest 38th Court.

“The property is quite narrow and there’s an alley in back so we’re squeezed in all directions,” said Mr. Fort-Brescia.

He described the structure as a very simple, high efficiency building with some parking on the ground floor. The garage supports a pool deck and its façade will be treated in an artistic way.

Mr. Fort-Brescia said the final artwork chosen will complement the new building and not be something separate.

One document submitted to the city says the integrated eight-story garage will be fully adorned with murals.

The total floor area is 385,961 square feet. The project will provide parking for 319 vehicles. The developer is asking for a waiver for permission to reduce required parking by up to 30%.

In a letter, Mr. Lago wrote: “The project’s close proximity to the Metrorail and multiple bus and trolley stops encourages the use of mass transit for residents and visitors. Miami 21 [zoning code] emphasizes the use of alternative methods of transit and enhancing the experience for those who do not drive. A parking reduction is appropriate due to the level of transit service available to the property.”

The building is to have 825 square feet that Mr. Fort-Brescia said might accommodate a coffee shop.

At ground level, on the southeast corner would be the 1,440-square-foot residential lobby, and going west will be the 825-square-foot retail space, followed by a 710-square-foot leasing-retail office and a library.

The building will have storage for up to 44 bicycles.

Also at ground level, along Southwest 38th Avenue, at the northeast corner are four one-bedroom apartments ranging in size from 780 to 574 square feet.

Board member Fidel Perez was pushing the developer to replace those four spaces with additional retail uses. “I feel very strongly about that,” he said. “In the near future you’ll benefit from that.” Mr. Perez said an existing coffee shop nearby is “always busy.”

The owner-developer seemed reluctant to switch, and quietly discussed the matter with Mr. Lago.

Mr. Fort-Brescia told the board that retail brokers discouraged the developer from having retail there.

“The neighborhood has to gel a little more,” Mr. Fort-Brescia said.

Mr. Lago told Mr. Perez his comments were good input and as the area develops further, the owner would look into further retail and work with the planning department staff on the matter.

“I understand but it’s like everything, if we don’t push the issue… You have an opportunity to do something there, to create activity,” Mr. Perez said.

“That is a high traffic street. The area connects with Merrick Park, and two office buildings,” said Mr. Perez, repeating his strong desire to see the four residential units on 38th Avenue switched to retail.

He added that he likes the building’s design and that it is an excellent area.

Board member Ignacio Permuy thanked the developer’s team for a very thorough presentation, saying he believes the project will be very successful and have an immediate positive impact.

Acting Chairman Gerald C. Marston said it is “essential” these days to have a building with the ability to adjust to changes, especially in an urban setting. “That neighborhood will development, with more and more people on the street,” said Mr. Marston, and it may make sense to change the four residential units on 38th Avenue into retail spaces.

“The ability to be flexible will make these projects more successful on a long-term basis,” he said.

Mr. Marston also complimented Arquitectonica. “You continue to amaze me,” he told Mr. Fort-Brescia. The firm continues to turn out well-articulated projects and not ones that are cookie cutter, he said.

“You articulated the balconies… it seems to have a freshness to it,” he said.

The final motion to recommend approval included a condition from Mr. Perez that the owner-developer agree to study converting the four residential units into retail as an option in the future.

“We agree,” said Mr. Lago. The vote was unanimous.