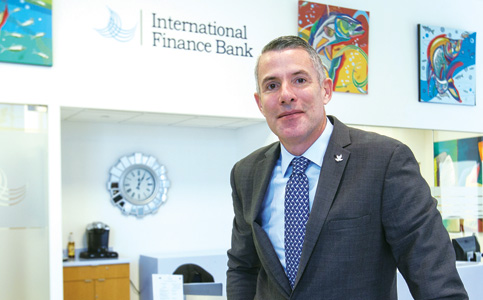 Last year marked 30 years in the banking industry for Jose Cueto, president and CEO of International Finance Bank (IFB Bank), and it was a banner year at that.

Mr. Cueto, who assumed his role in May 2015, has in less than four years more than doubled the bank’s assets, from $332.2 million to $692 million, a growth spurt that in October culminated with the $152 million acquisition of the international portfolio of Modern Bank, as well as the bank’s midtown Manhattan location.

“That presented itself as a really good opportunity for us and certainly a synergistic fit for who International Finance Bank is,” he said. “It allowed us to have a presence in midtown [Manhattan], further expand our footprint in terms of [what] we want to do going forward [and] came with a seven-person team that was exceptional. That was a key component of the deal: the people behind the management of this portfolio.”

That, he said, is the secret behind the bank’s success: prioritizing people, human interaction, service, and maintaining that regardless of size, a financial institution’s greatest asset is and will always be those it serves and the individuals who serve them.

“There was a gap between the big banks in terms of sophistication and the personality and human aspect that goes with what had traditionally been community banks,” he said. “There [is] really no reason you couldn’t be sophisticated and cutting edge and at the same time provide a human touch to your clients.”

The United States division of Grupo IF, a private six-bank international conglomerate with interests throughout North, South and Central America, IFB Bank serves large and middle-market corporations, medium and small businesses and professionals through standard and concentrated banking services.

This year, Mr. Cueto said, the bank’s footprint in providing those solutions will again expand, as IFB Bank opens a loan production office in Tampa.

“It’s still in the regulatory notification phase, but we [will try] to position the bank to have access to the [Interstate 4] corridor [covering] Tampa, Orlando and, more than likely, Jacksonville,” he said. “We want to have diversification in where we lend money. South Florida is seeing certain headwinds and, being opportunistic, you go where you perceive there [is] value.”

Mr. Cueto sat down with Miami Today reporter Jesse Scheckner. The interview, recorded by Jahmoukie Dayle, can be found Friday at http://bit.ly/2uNHy0Q.