Advertisement
The Newspaper for the Future of Miami
Connect with us:
Front Page » Opinion » It’s well past time we all get good look at the Miami Circle 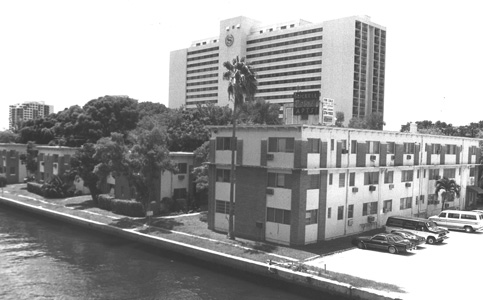 The State of Florida is about to unveil a plan for “great and exciting improvements” at the Miami Circle site it owns at the mouth of the Miami River in Brickell, Miami Today reports this week.

Unless you’ve been in Miami for decades it’s unlikely that you’ve been to the Miami Circle site. Only a few Miamians have ever seen the circle itself. In fact, even knowledge of its existence today is scant.

Yet the circle is an archaeological discovery of impact, estimated at 2,000 years of age. The 38-foot-diameter stone structure is the largest and most significant artifact of the Tequesta people who lived in Miami millennia before the Spanish arrived in Florida. As such, it’s worthy of respectful treatment as well as study.

A mandatory archaeological dig uncovered the circle below when developers razed the 1950s era Brickell Point Apartments in 1998 with plans for a riverfront high-rise.

Miami Today soon revealed the find, followed by other reports six months later. That public awareness of, and interest in, the mysterious circle stymied construction plans, and the state subsequently bought the site for $26.7 million.

Development at the site that then was hemmed in by a hotel next door would have been iffy anyway, so the developers walked away with a handsome profit on their land while the citizens of Florida acquired a landmark.

It would have been a true landmark if the state had ever displayed the circle properly. But the state had no money to make its purchase visible to a public that seems to believe Miami was nothing before Henry Flagler brought his railroad here in 1896 and the city was incorporated by several hundred persons.

Faced with no money to display the archeological find it was so anxious to acquire, the state soon reburied the Miami Circle to protect it and eventually planted grass on top. The land became an informal park and dog-walking site, with signs telling the public that a great artifact lay just below.

Eventually, the state got the land cleared of public refuse and announced plans to create a 3-D replica of the circle above ground for all to see on what has in the interval been formally declared a national historic landmark. But that never happened either.

Others over the years had tried to make it possible for the public to view a millennia-old slice of history. The National Park Service and then the Historical Museum of Southern Florida (now named HistoryMiami) controlled the Miami Circle site before the Florida Department of State took over. None of them was able to put either the circle or a replica on view, even if under glass.

So it’s very positive that the Department of State now says it is “finalizing plans” for improvements. We’d hope those plans would be significant and not just another cleanup or new signs.

For starters, visitors should get a full-scale view of either the circle itself or a very realistic replica, all with appropriate commentary on the circle’s likely provenance and use, with an exhibit on what we know of the Tequesta people and another on the circle’s discovery by archaeologists.

Then there should be parking, not just a circular driveway for school buses. Presumably what the state does will be worth viewing, and it should be viewed by as many of us as possible. It could even be a visitor attraction – if visitors could learn of its existence and get there.

Then there are artifacts found at the circle site and later at two smaller stone circles on the river’s north bank nearby, where high-rise development proceeded despite the discoveries. Any worthwhile display would include more than just photos of those finds.

Where the state would get funds to do the displaying properly should become clear when plans are unveiled. Without real funding, we’d be looking at just another, more attractive dog park.

One thing is certain: the last thing the Miami Circle needs is yet another master plan that will sit undone on some shelf in Tallahassee. It’s been two decades since Florida acquired a site that it found highly significant. It’s well past time to show us all why that’s so and what’s there.