Advertisement
The Newspaper for the Future of Miami
Connect with us:
Front Page » Top Stories » ‘Great and exciting improvements’ due at Miami Circle

‘Great and exciting improvements’ due at Miami Circle 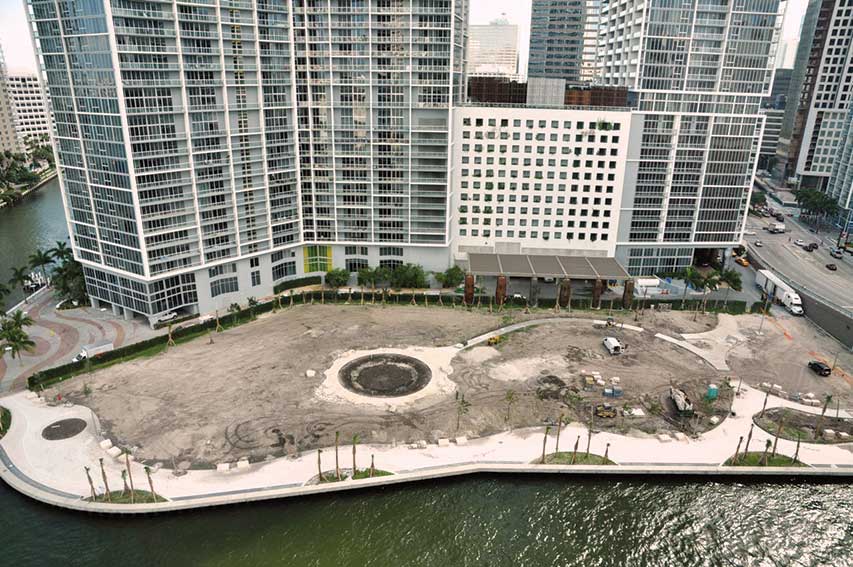 The Miami Circle site at Brickell Point, which once belonged to the Tequesta Indians, could finally be seeing some major improvements. The Florida Department of State is “finalizing plans to make some great and exciting improvements at the site” that will be coming out in the coming months, according to Sarah Revell, director of communications for the department.

“Currently, the department maintains an excellent partnership with the Miami River Commission and they oversee the day-to-day maintenance of the site,” Ms. Revell told Miami Today via email.

After the state made a series of improvements to the Miami Circle site over the past few years, it required additional repairs after a hit from Hurricane Irma set the site back.

The site was discovered in 1988 when an apartment building on the land was razed for new construction. It is now a designated National Historic Landmark. Since its discovery the archaeological structure has been dug up and is now once again buried under protective limestone. The circle at 401 Brickell Ave. is now public property.

The first round of pre-Irma improvements included landscaping such as boulders for seating and to prevent vehicles from driving onto the land at the mouth of the Miami River. Pet waste stations were installed as well as more trash and recycling bins to keep the area clean. The state is paying for trash removal three days a week from the site, which doubles as a neighborhood park.

Before the improvements, the site had been neglected for years. The project is state funded. The state earlier had been considering creating a 3-D replica of the buried circle so that visitors to the site could have an idea of what the now-buried 2,000-year-old circle looks like, but there has not been further discussion about it.

History Miami Museum on at 101 W Flagler St. features history about the Tequesta Indians. An exhibit at the museum, “First Arrivals: The Archaeology of Southern Florida,” features artifacts from the Miami Circle. The current interpretive displays at the Brickell site are accurate, Ms. Revell previously told Miami Today, but the state is looking to update and improve them.

2 Responses to ‘Great and exciting improvements’ due at Miami Circle