Advertisement
The Newspaper for the Future of Miami
Connect with us:
Front Page » Opinion » Miami, hold firm against development in our ‘Central Park’

Miami, hold firm against development in our ‘Central Park’ 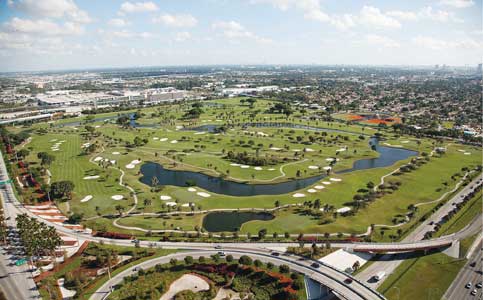 Very soon Miami commissioners may be handed a deal between city administrators and developers of a massive mixed-use complex that, along with a soccer stadium, would replace the city’s only golf course. If history is a guide, commissioners will nitpick details, demand a pittance for affordable housing and maybe something extra for their districts, then sign off on the deal.
But rather than worry about details of a land lease with the local Mas brothers and soccer legend David Beckham, commissioners should take two steps back and view the plan for what it is: a sweetheart handoff of a vast swath of open city park land for 99 years to persons who should never be allowed to set foot on the site for development.
City voters on Nov. 6 permitted negotiations between the city and the developers who sought the site unasked and without competitive bids, but voters didn’t approve a deal. Only bare outlines were available. Site uses were estimates only, as were financial details, method and cost of cleaning up pollution under the golf course (it was built over a dump) and hundreds of details that would appear in final agreements. Absent too was federal clearance to develop under a flight path of adjacent Miami International Airport.
It is those points that city officials must now be resolving with the developers. Those officials must be seeking the best business deal for the city. But they don’t make final decisions, like the final terms or whether there should be a deal in the first place.
Those policy decisions come down to the five Miami city commissioners. They will undoubtedly ask about terms like the skimpy $1.13 a year rent per foot and jockey for pet concerns, ranging from eking out a bit more revenue for city coffers to jobs for their districts.
But rather than tweak the contract, what the commissioners should be examining is whether the city should give up its patrimony whenever a developer asks for public lands – especially lands that are not only in use 365 days a year but constitute the only such amenity this globally famed city has, a golf course.
How many major US cities have no golf in their boundaries? We can’t find one. Make this deal and Miami will become the first – not an enviable first, either, in what is supposed to be a visitors’ paradise.
If you look at old promotions, you’ll find ads touting Miami’s 70-degree winters and golf every day. Having 70-degree winters and a soccer stadium within an office and shopping hub where games are played occasionally doesn’t cut it.
Plus, that stadium isn’t intended for public play. That’s why the developers are after county parkland to take over where their soccer team can practice and run camps for youth – for a fee that they will collect.
Two city commissioners voted against a November referendum. If the two hold firm, it’s game over for the developers, who will need four of five votes to proceed. Those no votes came from Willy Gort and Manolo Reyes, who deserve all the support Miamians can give them so that they don’t buckle under to development in city parkland.
We understand those commissioners who say the city is desperate for income. It’s true. But if that is the reason for a deal, competitive bids for the site would bring far more revenue.
We also understand and agree with those who want pro soccer in Miami. But it doesn’t take our only city golf course to get soccer. It’s the best deal for developers, but the worst for the public.
The developers will paint the November vote as a mandate to make a deal, but it was no such thing. The vote permitted negotiations. It was not a requirement that the city commission then rubberstamp the negotiations.
We noted last week that Miami developers for many decades have been creative in erecting office buildings, retail sites, and hotels, all of which are the keystones of this development deal. What has been lagging, we noted, is governments providing infrastructure that our growing city needs.
In this case, we already have the vital government-crafted infrastructure – a 131-acre open site that is increasingly surrounded by development. We will never again find an open space that large within city limits, and we must retain it.
Manhattan has all the development density in the world, but it retains its 840-acre Central Park wide open. Miami too should hang firmly onto its 131-acre green space.

11 Responses to Miami, hold firm against development in our ‘Central Park’