Advertisement
The Newspaper for the Future of Miami
Connect with us:
Front Page » Government » Florida plans improved public riverwalk under 836 in Miami 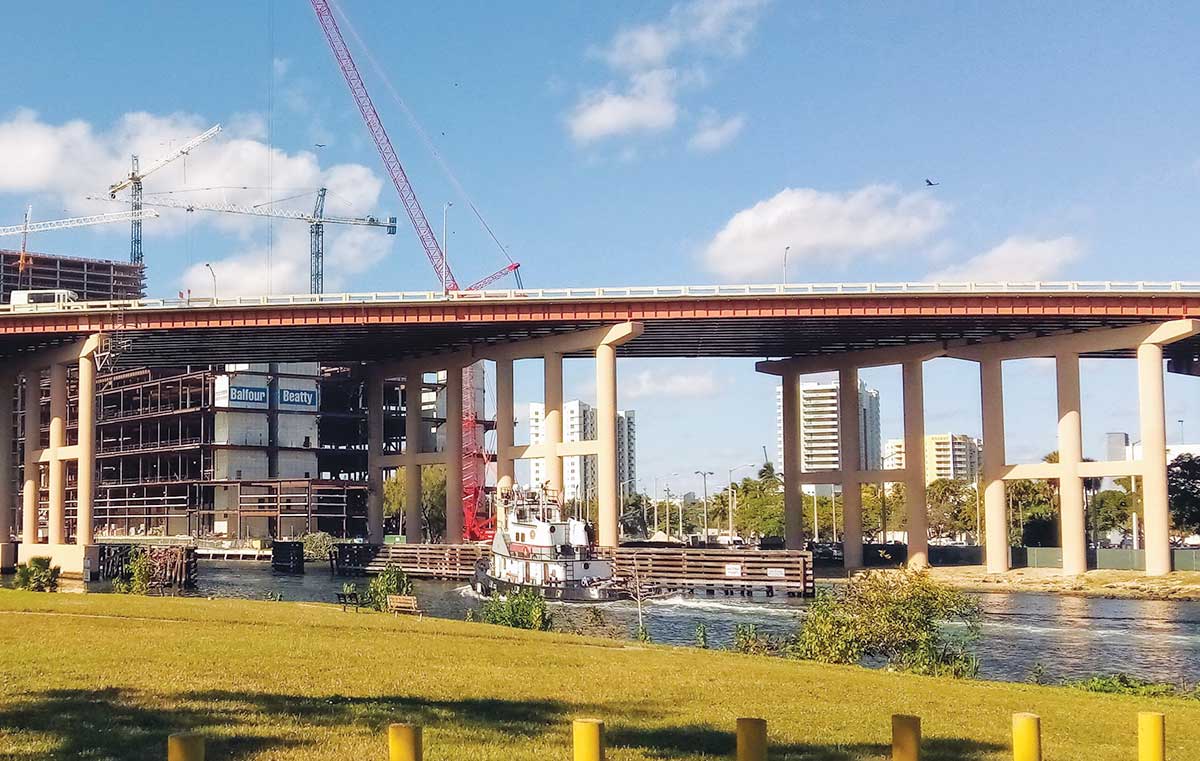 State highway officials now intend to include an improved public riverwalk under a highway overpass slated for a major upgrade, Miami River Commission members were pleased to learn Monday.

Fresh draft drawings presented to the commission show plans for a greenway-riverwalk along the north shoreline under the SR 836 bridge, including a clear pathway 15 feet wide and a new bulkhead wall to stabilize the shoreline.

Work on 836 is part of a major highway improvement from the Florida Department of Transportation (FDOT) and the Miami-Dade Expressway Authority (MDX) identified as the I-395/SR 836/I-95 Design-Build Project.

When representatives of FDOT and MDX met with the river commission in December, there were no plans to build a riverwalk or seawall (bulkhead wall) as part of the overall project.

At the Dec. 3 meeting, river commission Managing Director Brett Bibeau said the north shore was “eroding day by day,” there is no rip-rap and no seawall there, the shore needs stabilization and the river commission prefers a seawall in order to build the public riverwalk under 836.

The river commission provided FDOT and MDX with copies of the city code and Comprehensive Plan, which require new developments to include a public riverwalk with a seawall.

A riverwalk on the north shore would connect the mixed-use River Landing property with the Merrill Stevens Boat Yard property.

Mr. Portela said he met in the field with Mr. Bibeau and studied some areas under the current 836 elevated highway.

The drawings resulted after those site visits. One sketch shows an overhead view of the proposed placement of the riverwalk. Another drawing is a side view cutaway showing the four zones required in a riverwalk including about a 3-foot-wide transition zone from the sidewalk on Northwest North River Drive, an existing 8-foot-wide bridge support column, a 3-foot-wide passive zone of pavers or concrete, a minimum 15-foot-wide circulation zone (the main pathway) constructed with pavers, a 4-foot-wide safety zone, and ending with a 2-foot-wide bulkhead wall (raised edge).

The existing wooden fender system – barricades adjacent to support columns – is being repaired, and replaced entirely with new materials in the same locations, said Mr. Portela.

Mr. Portela said what has yet to be determined is who will pay for the shoreline work and riverwalk under the bridge.

Miami-Dade Commissioner Eileen Higgins, a new river commission member, was happy to see the plan for a riverwalk committed to paper.

“This is great,” she told Mr. Portela. “I see this as progress. It’s nice to see the riverwalk … and a wall is necessary. I’m very pleased to see this.”

At the December meeting, Ms. Higgins strongly urged FDOT and MDX to provide more specifics and clarity during community outreach about the $802 million project, which includes a “signature bridge” over Northeast Second Avenue and Biscayne Boulevard, and an upper deck of traffic built over SR 836 and the Miami River.

The second deck of traffic planned for SR 836 includes portions over the river, with the existing highway stretching from Little Havana on the south to the Health District on the north.

With major construction finally set to begin in February or March, representatives for FDOT, MDX and the contractors have stepped up community outreach.

In a letter to MDX, Miami Mayor Francis Suarez spelled out what he sees as the need for seawalls and riverwalk under the 836 bridge, and requested MDX and partner FDOT include them in the project.

Mr. Portela indicated the site visit under SR 836 was eye-opening.

“We realized rip-rap was not going to work,” he said. Typical rip-rap is loose stone used to form a foundation for a breakwater.

River commission member Sandy O’Neil praised Mr. Portela, saying she was pleased to see progress was made toward extending the public riverwalk as part of the highway project.

“You listened to what we said, and I hope to see continued collaboration,” she said.

Commission Chairman Horacio Stuart Aguirre asked if there were plans to close parts of the river during the highway construction.

Mr. Portela said there should be no cause to temporarily close parts of the river, as the main construction will be on top of the existing elevated roadbed and bridge.

“The 75-foot navigational channel should not be impacted,” he said, while noting a multitude of permits are needed as part of this project.

The river commission on Dec. 3 recommended approval of the improvements to 836 with these conditions:

■Maintain vessel navigation between the bridge fenders in the federal navigable channel while constructing.

A fourth condition required project representatives to attend the January meeting with an update on plans for the shoreline under the highway.

Preliminary construction has begun on the overall project, with major construction anticipated to begin in February and March.

Pier construction along the river is expected to begin in August and September, and vibration monitoring equipment will be used during drilled shaft and pile driving operations.