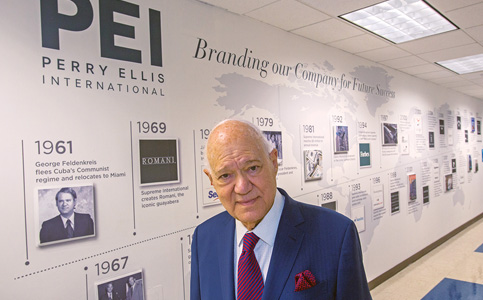 For George Feldenkreis, 2018 was a comeback year as the Perry Ellis International chairman reassumed control of the business he launched in Miami-Dade more than half a century ago.

That unceremonious removal from a company he built from a small manufacturer of uniforms in 1966 to an apparel industry titan that this year posted $3.3 billion in global sales, he said, did not sit well with him.

“I considered that a betrayal, so I was really motivated,” he said. “They decided one day – there was a conspiracy – without an interview [or] meeting [that] I’m not the kind of CEO they need. It may have been a matter of jealousy. I had a decision to make.”

In October, it was announced an entity controlled by Mr. Feldenkreis had successfully completed acquisition of the company, which would subsequently become private to allow for a long-term view in facing industry changes.

“If you don’t adapt, you disappear,” he said. “As a public company, it’s harder to [do] that because the reality is sometimes you have to say, ‘I have to get out of [this business]; I’m losing money no matter how much I invest or the image of the business. Privately, you can say, ‘To hell with it.’”

Mr. Feldenkreis sat down with Miami Today reporter Jesse Scheckner. The interview, recorded by Jahmoukie Dayle, can be found Friday at http://bit.ly/2uNHy0Q.