Advertisement
The Newspaper for the Future of Miami
Connect with us:
Front Page » Top Stories » Six-phase mixed-use project for Wynwood gets an OK

Six-phase mixed-use project for Wynwood gets an OK 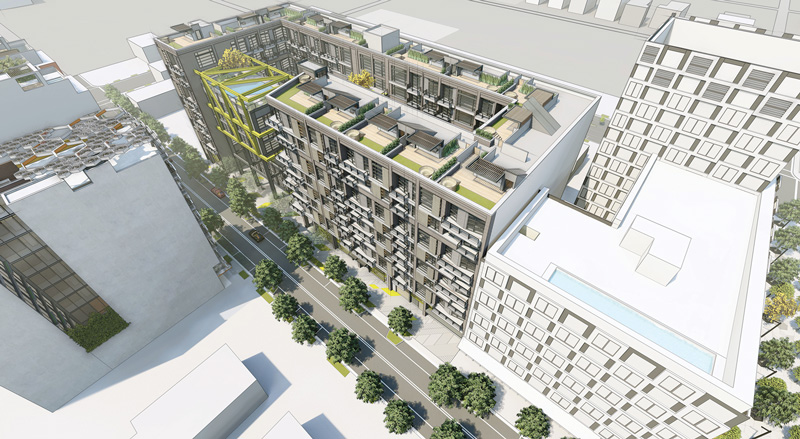 The first phase of what promises to be a six-phase mixed-use project for Wynwood, bringing condos, retail stores and hotel rooms to the rapidly evolving neighborhood, has earned a supportive vote from a City of Miami review board.

Bel Invest USA Inc. is proposing the major development, to be called the Wynwood Quarter, eventually spanning from 25th to 29th streets.

The Urban Development Review Board on Dec. 18 recommended approval of the project on a 4 to 2 vote. Willy Bermello and Anthony Tzamtzis were “no” votes.

This will be the largest project of the planned overall development.

It includes an eight-story building, 143 residential units, 23,973 square feet of ground floor retail uses, and parking for about 251 vehicles.

Mr. Bermello was pushing to get the developer to come back to the review board for approvals for artwork on three large walls of the structure, and Mr. Tzamtzis said he didn’t think the design of the building fit in with the character of Wynwood.

The building is designed with a distinctive courtyard, which earned praise from the review board.

The proposal was considered in November by the Wynwood Design Review Committee and approved with no conditions.

He said this project is bringing significant development to an area of Wynwood that’s seen very little activity.

“It will bring life to this northeast quadrant,” Mr. Wernick told the board.

The first building is to be constructed with industrial materials that relate to the history of Wynwood, he said, and accented with mural art components to be chosen later.

The expansive courtyard is designed to offer respite in the urban environment, and will serve to bring people together, he said.

“This is the first phase of six phases,” he said.

The building is to have a continuous ground floor retail front, he said, a compressed loading and garage area to the west, and a courtyard in the center.

The residential units will be sized from studio to 3-bedroom units, and the rooftop will have private terraces for the penthouses below, he said.

Mr. Del Monte said the structure will be built with a good blend of materials, bricks and metal.

“It’s all about creating a rich environment while still having the Wynwood character,” he said.

Parcel A is just under one acre.

The development of Parcel A and five other infill development sites nearby amount to about 2.3 acres in the northeast quadrant of the Wynwood Arts District.

Some of the materials presented to the city’s review board included maps and images of the entire overall development, and board members asked about those.

Mr. Wernick said there is an internal master plan for the entire six parcels, including some smaller planned mixed-use buildings, and the developer wanted to show the board the overall plan.

Board member Ignacio Permuy congratulated the developer and architect, calling the first structure “very well done,” and saying it captures the character of Wynwood.

The courtyard is a very good feature, he said.

Mr. Permuy said he was concerned about the layout of the loading area, where vehicles would be backing out onto 28th Street.

“One option is to provide a dock master. It is a tight space,” he said, suggesting a dock master’s office with windows to help control loading and deliveries.

“I love the idea of the courtyard,” said board member Gerald Marston. “The courtyard is such a strong feature.”

Mr. Marston – as did Mr. Bermello – did question the developer’s plan to wait to select artists for the murals until building permits are issued.

Mr. Marston was particularly concerned about ensuring the artwork be maintained over time.

The developer’s representatives said the images of blank walls in three areas were meant to be placeholders until the artists and artwork are chosen later.

“It’s intended to be a condominium,” Mr. Wernick said of the residential units, adding that some of the art murals may be temporary as other development rises on neighboring properties.

“That’s a dicey path … can we tie a condo association to maintain the art,” stated Mr. Marston.

Mr. Wernick said the intent is to have art in the project as long as it remains visible, and that the artwork will be maintained.

“To say you’re going to create a piece of art, you have to protect it,” said Mr. Marston. “If that is not the intention, then why even do it?”

Mr. Wernick said the plan is to have curated, well done artwork as part of the project, and not commercial signage. He also said the developers are willing to work with the planning department staff on the art.

“I love this project,” said Mr. Bermello at first. “It’s edgy. It’s in character with Wynwood.”

Mr. Bermello said he would vote for approval subject to the art walls coming back to the board before a building permit is issued.

“What’s on it, I think, is important,” he said of the walls destined for art murals.

Mr. Bermello said to vote on approval of the project before knowing what the art will look like would set a bad precedent, like the developer saying “trust me to do something nice.”

Mr. Marston said he would be comfortable having the Wynwood Design Review Committee review and decide on the final art pieces.

The newest member of the city board, Ligia Labrada, said it was nice to see the developer’s team consider the value of open spaces and areas for pedestrians to explore.

Mr. Marston eventually made a motion to recommend the project to the planning director for approval, with a condition that the art walls be sent to the Wynwood Design Review Committee for “review and approval.”

Acting Chairman Dean Lewis added a condition that the architects reconsider the design of exterior corridors to bring in more light, or “daylighting the corridors.”

The developer is requesting several waivers, including up to a 30% reduction in required parking spaces, and allowing access for loading on a principal frontage.

In a letter to the city, Mr. Wernick wrote: “The proposed waivers … help to further achieve a feasible, attractive and cohesive project, contributing to a larger vibrant pedestrian-oriented community that will implement many of the goals and objectives of the Wynwood Neighborhood Revitalization District.”

He concluded: “The Project will be an important step towards revitalization of the northeast quadrant of Wynwood – creating community, connectivity between NW 2nd Avenue and the eastern portion of the neighborhood, and an architectural language built upon the character

unique to the neighborhood.”

Mr. Wernick said Bel Invest and its principals have significant experience developing projects throughout some of Europe’s most urban and dynamic cities, including Barcelona, Berlin and Milan.