Advertisement
The Newspaper for the Future of Miami
Connect with us:
Front Page » Top Stories » Overtown hotel planned for business travelers 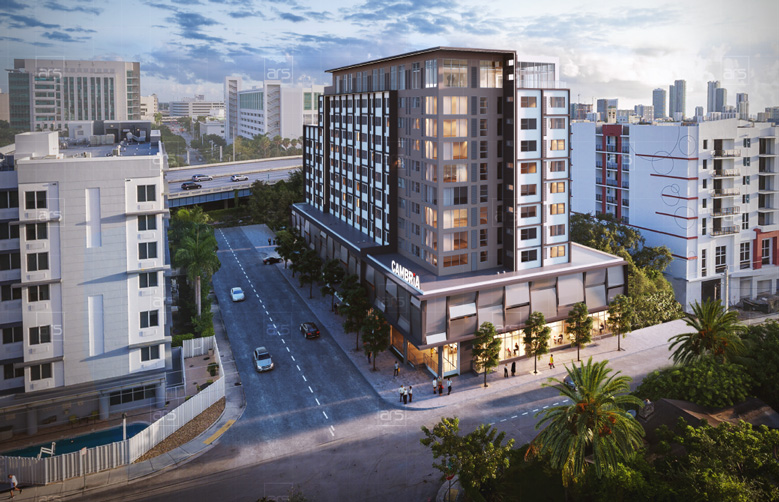 A developer has plans to build a new hotel in Overtown, catering to the business traveler.

Central District Miami Redevelopment Group V, LLC has submitted its proposal to build a Cambria Hotel to the City of Miami.

The project was reviewed Dec. 19 by the Urban Development Review Board, which recommended approval by the planning director.

The hotel is to rise 12 stories and have 192 rooms, with parking levels to accommodate about 105 vehicles.

Documents filed with the city show the project’s overall size to be 172,729 square feet, with 7,388 square feet of open space, or about 24% of the property. The plan also includes 621 square feet of office use.

The site is near the city’s Health District, and close to the Culmer Metrorail Station.

Marissa A. Neufeld, an attorney representing the developer, said Cambria Hotels is part of The Choice Hotel group, a collection of hotels that offer a wide array of specialty experiences.

In a letter about the project she wrote, “The Cambria collection emphasizes modern design geared towards business travelers. As such, the hotel’s amenity program focuses on flexible meeting space, tech capabilities, and upscale lounge areas to serve today’s modern business travelers.”

Ms. Neufeld told the board the planned hotel will have a rooftop swimming pool, flexible meeting areas and a bistro dining room, plus a lobby oriented toward a very active street scene.

Architect Alberto Cordoves of Corwil Architects detailed some of the hotel plans and showed a few renderings.

He said the ground floor will be home to meeting rooms and a small restaurant-dining area, and the loading has all been internalized. The 12th level is to be an open amenity deck with a pool and a fitness room. Mr. Cordoves described the design as “clean and contemporary in nature.”

The developer is requesting waivers including: up to a 30% reduction in required parking; allow up to a 10% reduction of the minimum access aisle width from 23 to 22 feet; allow the substitution of one commercial loading berth for two residential loading berths; allow parking along a primary frontage to extend into the second layer above the first story; and to allow up to a 10% increase of the maximum building floorplate length from 180 feet to 188 feet and 6 inches.

Board member Ignacio Permuy thanked the developer and architect for “a job well done,” saying the planned structure is well articulated.

He said he appreciates how the floor plans show how the architects broke up the lines of the corridors.

Mr. Permuy said his only concern was the loading and parking using the same entrance, and he said he was worried that larger trucks would cut off the drive to other vehicles.

Mr. Permuy suggested a dock master to help steer and manage loading and deliveries at the hotel. The architect said it was a good point and they would consider it.

Board member Willy Bermello said it is a tough site and a challenging project. He said he was concerned the structure looked top heavy, like it was squeezing the ground floor.

Mr. Bermello was critical of the placement of the air conditioning unit, but learned it was not the choice location of the developer but rather others.

Finally, Mr. Bermello was critical of a request to narrow the driveway into the building from 23 to 22 feet wide. He said it may seem a minor change but can result in very tight turns, where a vehicle can only turn if it uses part of the opposite lane.

Mr. Cordoves said they would take another look at the width.

Acting Chairman Dean Lewis offered advice to deal with the issues mentioned by Mr. Permuy and Mr. Bermello. He suggested that the addition of a mezzanine level would allow a wider drive entrance, using a roll down to block use of the loading berths until needed, and he suggested several alternative air conditioning units and systems.

Board member Anthony Tzamtzis called it a nice design. “I like the amenities, both bottom and top,” he said.

Member Gerald Marston moved to recommend approval of the project, with a condition that the developer use a tree planting process for all the street trees that encourages a strong root zone.