Advertisement
The Newspaper for the Future of Miami
Connect with us:
Front Page » Communities » Henry Flagler house in Fort Dallas Park is crumbling 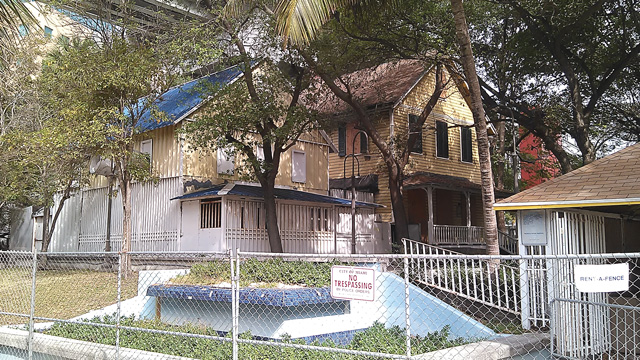 Members of the Miami River Commission are alarmed about the deteriorating condition of a historic house at the city’s Fort Dallas Park, and are particularly troubled by city officials who’ve done little to save the rare structure.

When the river commission meets Jan. 7, an agenda item will be an update on the fate of the Flagler Worker’s House, located at the long-closed and fenced-off riverfront park at 60-64 SE Fourth St.

Commission members will each have a copy of a September report, requested by the city, that shows the house is in dangerous condition with substantial structural damage.

The historic home was discussed Dec. 12 at the commission’s Urban Infill and Greenways Subcommittee meeting.

Chairman Jim Murley fashioned a suggested resolution he is recommending the full river commission adopt at the January meeting, with the goal of saving the house and getting the park reopened for public use.

“They need to stabilize the house, at the very least. We need to protect that,” said Mr. Murley.

He suggested the river commission make the following recommendations to the city:

■Make certain the city manager has the September report.

■Stabilize and renovate the historically-designated home, demolish the two non-historic structures in the small park, and improve the public park space.

■Have the City of Miami apply to available historic preservation related grant programs for funds.

■Repair the Fort Dallas Park dock, which was destroyed in Hurricane Irma, with city-requested funds from the Federal Emergency Management Agency.

Of the total, $78 million is earmarked for parks and cultural facilities.

“We can strongly recommend that the city evaluate the merits of spending some of that [bond] money for improving the entire site plus the house,” Mr. Murley said.

The river commission has pushed the city for years to clean up and improve the park for public use, and restore the Flagler Worker’s House.

For many years, seafood restaurant Bijan’s operated from a commercial building in the park under a lease with the city. Litigation and allegations of unpaid rent ensued and the eatery eventually closed. The legal fights have long been over but the park’s fate remains uncertain.

For the most part, the park has been blocked off and forgotten for more than five years, attracting trash and the homeless.

Efforts by the city to attract new managers or uses in the park have gone nowhere.

The city commission designated the Flagler Worker’s House a historic structure in 1983. This frame vernacular style “Royal Palm Cottage” was constructed in 1897 from native pine with a gabled, shingled roof.

The general assessment report on the condition of the house was prepared for the city’s Department of Real Estate and Asset Management by Douglas Wood Associates Inc.

The report says the existing structure should be considered to be in a state of “Substantial Structural Damage,” as defined in the Florida Building Code. There are also a number of areas that should be classified as “Dangerous Conditions,” it says.

But the report goes on to say that rehabilitation and restoration are feasible, but costly.

“For general preliminary consideration, it might be assumed that the construction cost of the rehabilitation and restoration of the Flagler Workers House will be in the range of $600,000 to $900,000. This cost includes all building systems for a complete shell of the house only. Professional fees, development costs, special interior construction, elevator, additions and site improvements are not included in this estimated construction cost range,” the report says.

Some river commission members believe it is a shame that the riverside park, in such a high profile area of downtown, has remained shut off from the public for so long.

In fact, it was nearly a year ago, at the February meeting of the river commission, when members again pushed the city to do whatever is necessary to get the park reopened.

On Feb. 5, the river commission unanimously recommended that the city request proposals for a restaurant in Fort Dallas Park subject to these conditions:

■No reduction of the size of the existing public riverwalk and public side yard, which provides access to the riverwalk.

■Expedite the process to re-open and re-activate this important and historic riverfront park.

■If no bids or proposals are received again to this site’s third consecutive request for proposals, then restore the historic house, improve the property and re-open the entire Fort Dallas Park.

The fate of the park came up in talks about redevelopment of nearby city-owned riverfront that’s home to a Hyatt Regency hotel and the James L. Knight Convention Center. Hyatt proposed a major redevelopment but wanted a new lease.

Those talks between the city and Hyatt stalled and were deferred in 2017 and again this summer.