Advertisement
The Newspaper for the Future of Miami
Connect with us:
Front Page » Business & Finance » Purchase approval of Brickell Bank by Benhamous awaited 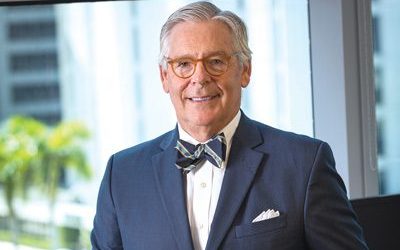 It seems the sun may be setting on the purchase approval of Brickell Bank this year. Chairman and CEO Frederick Reinhardt, who expected the Federal Deposit Insurance Corp.’s thumbs-up in 2018, remains hopeful about receiving purchase approval soon and expects the influx of capital to serve the company well.

The FDIC is weighing Joseph Benhamou’s offer after a public hearing was held with the Office of Financial Regulation in early November as required by Florida law. The meeting focused on the prospective 99.99% acquisition of the bank by Mr. Benhamou, his wife Mirella Viviana Benhamou-Arbib and their daughter Mycol Benhamou-Namdar. All parties involved are waiting for a response from the FDIC.

Some things will stay the same. The bank plans to continue operations from its location at 1395 Brickell Ave. and Mr. Benhamou expects to leave standing the organization’s wholly-owned subsidiaries, which include Brickell Global Markets, Tagide Properties, Brickell Global Advisory and Brickell Global Insurance.

Mr. Reinhardt said he believes the deal will help his organization recover from its lingering two-star rating from BauerFinancial.

Mr. Reinhardt said, “Brickell Bank is looking forward to a capital increase with the change of control and a renewed strategy of careful growth in private banking and lending.”

BauerFinancial studies and rates on a five-star scale independent banks and credit unions. Scores can dip as low as zero stars and rise to five stars for a superior, BauerFinancial-recommended status. Brickell Bank keeps falling short, holding onto two stars indicating a problematic status. A bank summary provided by BauerFinancial provides data as of September and demonstrates fluctuating conditions since last year. The bank checks in at $492.839 million in total assets in September 2017, then $473.078 million in December 2017, $472.473 million in March and slides further to $457.890 million in June. But total assets climb back up to $478.242 million in late September of this year.

Profit numbers show promise. The year-to-date profit is $2.432 million, according to BauerFinancial. That’s a slight increase from the previous calendar year that had a profit of $1.517 million. But the bank still has a way to go, seeing that the numbers are still shy of reaching profit from two calendar years ago of $4.584 million.

Brickell Bank and the Benhamou family now wait for regulators to give their blessing, hoping to receive good news sooner rather than later.