Advertisement
The Newspaper for the Future of Miami
Connect with us:
Front Page » Top Stories » Extension to State Road 836 could carry 92,000 cars a day 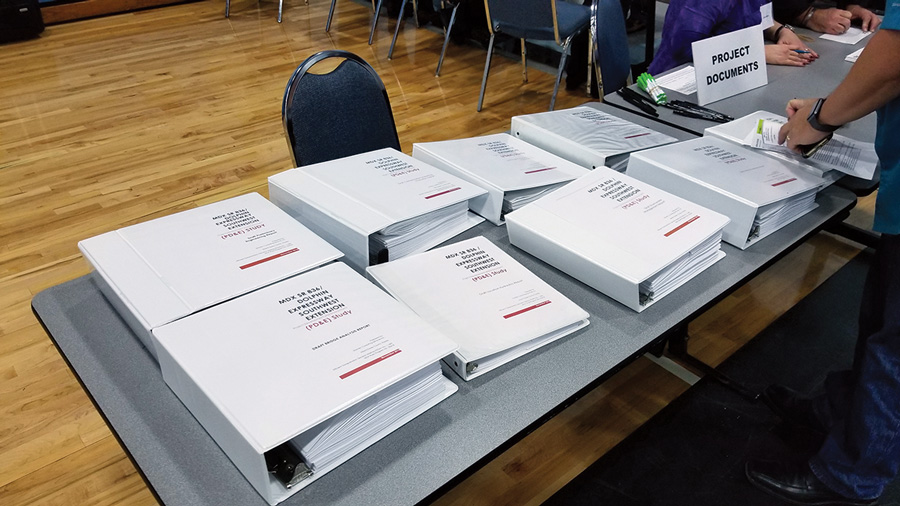 Some designs for the southwestern extension to State Road 836 veered too far west. Other routes flanked properties on Southwest 167th Avenue too tightly. Last week, the Miami-Dade Expressway Authority (MDX) showed residents its recommended solution for the Kendall Parkway, which it says is just right.

The route, labeled “Corridor 2 Alternative 2” at a hearing MDX hosted Dec. 13 at Archbishop Coleman F. Carroll High School in West Kendall, will feature six traffic lanes, a greenway for non-motorized shared use, “express technology lanes” for rapid bus and an “envelope for future rail,” according to MDX spokesperson Tere Garcia.

It would cut arterial rush-hour congestion an average 18%, according to Stantec Consulting Services senior principal Silvia Beltre, who said the parkway would be a boon to neighborhoods and economic engines like Miami Executive Airport while improving emergency evacuation and minimizing adverse environmental effects.

“This alternative is projected to carry up to 92,000 vehicles per day, [results] in the least impact to utility rail, drainage [and flood] considerations, [and] balances benefits to transit and recreational uses associated with a facility closer to existing residential and commercial uses [while distant] from existing homes to the greatest extend practical,” she told about 100 attendees. “From an environmental perspective, Corridor 2 Alternative 2 resulted in the best impacts to the most sensitive sites.”

The planned 14-mile route extends 836 past its present ending at Northwest 137th Avenue, traveling west to just before Krome Avenue and south to Southwest 136th Street and around Southwest 157th Avenue.

Alternative designs varied mostly around how closely the expressway would run alongside Southwest 167th Avenue. MDX settled on a solution close to the avenue but distant enough to mitigate air and noise effects.

To begin the roughly $1 billion project, the MDX must buy property from private owners.

MDX provided nine binders of varying thickness for residents to read, each containing a separate report related to the project development and environmental study.

According to an invitation for the hearing, these documents can be reviewed through Dec. 26, excluding major holidays, at MDX’s headquarters and Lakes of the Meadow, Kendale Lakes and West Kendall Regional libraries.

They aren’t online “because of their size,” MDX spokesperson Tere Garcia said.

No homeowners would need to move to make way for the extension, Glass Land Acquisition Service Specialists agent Soraya Fabian said. However, a flow chart provided to attendees showed that property owners’ options in the acquisition process are limited.

If no price is agreed to for the land MDX needs, a court will set one.

“If we are unable to reach a mutually agreeable purchase price, we may choose to file a condemnation action, which will not occur less than 30 days from the date we make our written offer to purchase,” the pamphlet states.

Miami-Dade commissioners in late September voted 9-4 to extend the expressway, which if OK’d by state and federal authorities would go beyond the county’s western development boundary.

Daniella Levine Cava, Eileen Higgins, Xavier Suarez and Audrey Edmonson, a member of the MDX board, voted no.

Mayor Carlos Giménez, who is MDX chairman, championed the plan.

At the time, MDX officials said the extension will generate about $45 million yearly in tolls, charging drivers $1 end-to-end.

State law requires MDX to transfer part of its surplus revenue to the county for transit projects.

Opponents argue the requisite destruction of roughly 1,000 acres of Everglades and potential impacts to the Biscayne Aquifer are unacceptable.

MDX has committed to purchasing at least 1,000 acres of wetlands. Sen. Marco Rubio’s office told Miami Today it expects MDX to buy “all the land necessary for the buffer and to swap those lands in aggregate for lands they need for the road in the east” and that “the county is aware that it may be as much as approximately 2,200 acres.”

Even that wouldn’t be enough, some residents say.

Others, like Country Walk resident Ory Donaldson, said MDX and county officials had done their due diligence in addressing and mitigating those concerns.

Longtime residents struggling through traffic daily were counting on the extension, whose critics, Ms. Donaldson said, would only be satisfied if no action was taken.

“After this evening, I can’t see how people are still coming up here saying things over and over again,” she said. “All these things were addressed – the aquifer, the wetlands, everything. The problem is [some people], no matter what the project is for, [will] be here against it.”

“I wouldn’t say the plans we saw are that detailed; it’s more like a line on a map,” he said. “This is affecting our drinking water. It could affect residents of the Florida Keys. To the extent that the Everglades in West Dade isn’t healthy, sea level rise in the future could become an issue for us, where we’re building another coastline that’s vulnerable to hurricanes.”