Advertisement
The Newspaper for the Future of Miami
Connect with us:
Front Page » Government » Downtown Development Authority to help fund Underdeck under I-395

Downtown Development Authority to help fund Underdeck under I-395 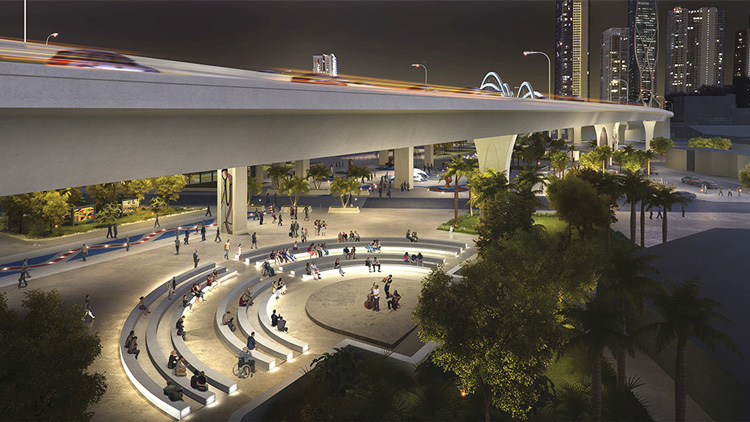 Directors of Miami’s Downtown Development Authority voted Friday to commit $50,000 to the development of the open space under I-395 as the Underdeck, a linear park that is meant to be a community gathering place. It’s part of the redesign of I-395 that’s will create the Signature Bridge.

The money will go toward the hiring of a designer for the space, which The Florida Department of Transportation will own but the City of Miami will manage.

“This is one of those things that can be really great or really awful,” said Alyce Robertson, authority executive director. “We’re partnering with the city to make it something fantastic.”

“This is a 33-acre linear park that is, right now, a blighted area between downtown and Overtown,” said Ken Russell, authority chair and Miami commissioner. “This will open it up for pedestrian activity and possibly some commercial leasing.”

“It’s very encouraging that FDOT recognizes that this is not their forte,” said Patrice Gillespie-Smith, authority senior manager for planning, design & transportation. The state transportation department has instead turned to entities that have managed open public areas, in its effort to maximize the empty space.

Responding to questions by board members Greg West, president and CEO of ZOM Living, and Alan Ojeda, president of Rilea Development Group, Ms. Robertson said the money is earmarked for the design process of this project only and that the authority will stay involved in every step of the design.

The funds should be spent to hire “a pre-eminent park designer,” said board member Gary Ressler, a principal of the Tilia family of companies.

“We now have a stake with the city,” Mr. Russell said. “We learned a lot with the Flagler Street project,” which was hobbled by delays and mishaps, and is still not complete. “All of us are working together from the start. We’re not trying to get someone else to buy into our vision.”

Said Mr. Ojeda, “We have to make sure we have a voice, and an ear.”