Advertisement
The Newspaper for the Future of Miami
Connect with us:
Front Page » Profile » Daniel Kodsi: Developing in second-largest US ongoing urban project 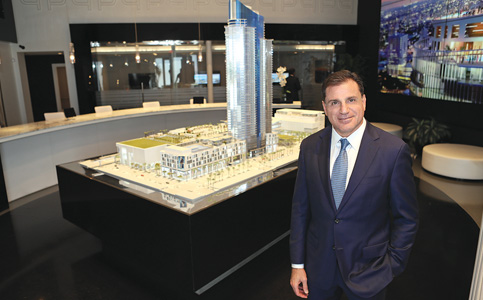 Daniel Kodsi is one of the lead developers in the second-largest urban development in the nation: Miami Worldcenter. But before being a prominent Florida developer, as an 11-year-old and the son and nephew of developers he started working in construction to become accustomed to being on-site.

With a passion for modern and classical architecture, Mr. Kodsi received his degree from University of Miami in 1991 in urban planning, architecture and finances. From there, he took off.

“Once I had the degree, I started developing a track record and then by the mid 1990s I started building a company, building some infrastructure, and I’d say towards the end of the 1990s I had eight or nine active projects at a time,” he said. “I just kept building and I built a multitude of products from single-family homes to apartments to mid-rise and high-rise. By 2005 I broke ground on Paramount Bay, which was a 50-story high rise. I kept building my track record from there. Of course I took a little hiatus from developing during the recession but besides that I’ve been developing for about 28 years.”

His largest project to date, but not his last, is coming close to finishing the first product. Paramount Miami Worldcenter is planning to open for residents in May or June 2019, according to Mr. Kodsi.

Rising at 900 NE First Avenue, the luxury residential tower Paramount Miami Worldcenter will be the signature tower of the 27-acre mixed-use development. The 60-story skyscraper offers a skyport for the future of flying cars, a rooftop observatory, a world-class spa, resort-style pools, an outdoor soccer field, two tennis courts, a boxing studio, a golf simulator, an indoor basketball court and a game room. It was financed with a mix of equity, traditional and EB-5 funding, Mr. Kodsi said.

Miami Worldcenter is a mix of seven developers. Mr. Kodsi, Nitin Motwani and Art Falcone teamed up to work on the Paramount tower and create something that Miami has never seen.

Mr. Kodsi is currently working on another phase of Miami Worldcenter, a second tower that is still in the design phase.

Mr. Kodsi, born in Montreal but raised in Cocoa Beach, sat down with Miami Today reporter Katherine Lewin. The interview, recorded by Jahmoukie Dayle, can be found Friday at http://bit.ly/2uNHy0Q.