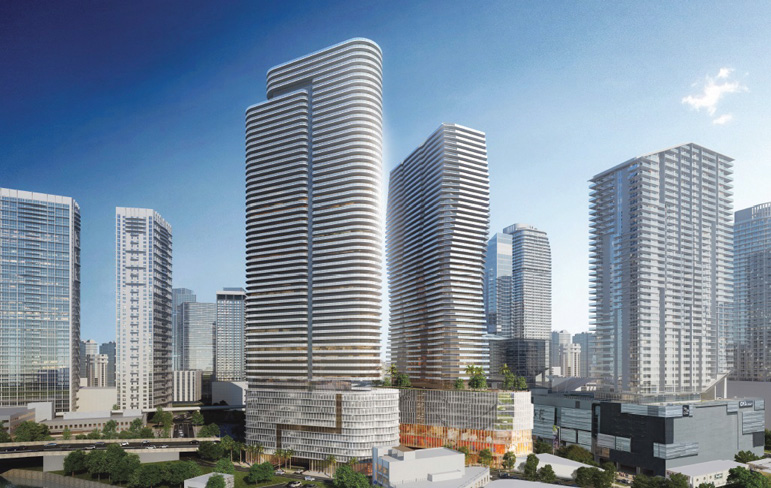 It could be two to three years before work starts on the next phase of sprawling Brickell City Centre, but when it does the City of Miami will get $1 million for affordable housing.

Developer Swire Properties agreed to the voluntary public benefits contribution as it seeks approvals to expand its footprint in the neighborhood south of the Miami River.

The Miami City Commission on Dec. 13 granted preliminary approval to a third amendment to the project’s Special Area Plan (SAP), and a second development agreement. The unanimous vote came during a first reading of two ordinances.

The second reading and final vote may be set for late January.

Approvals would clear the way for an additional 972 residential units in two new towers, and much more.

The large mixed-use project is in District 2, represented by Commissioner Ken Russell, who said he met with Swire representatives and got the promise of $1 million for affordable housing in the city.

Mr. Russell said the developer agreed to pay $250,000 on the city’s behalf to Habitat for Humanity and the remaining $750,000 on behalf of the city to Rebuilding Together, a non-profit, to use for single-family house renovations.

He said the $1 million was voluntarily offered above and beyond other public benefits to which the developer has also voluntarily committed, include building a public riverwalk and other improvements under the South Miami Avenue Bridge.

Mr. Russell said that Swire has already proven itself a good provider of extras that help out the city, including rebuilding a Metromover station.

He said when the latest requests surfaced he considered it was time to discuss housing affordability with the major developer and what it could do to help.

“We’re all in this together, and we do have a crisis,” Mr. Russell said.

The proposed method in which the $1 million would be spent was not supported by Commissioners Manolo Reyes and Joe Carollo.

Mr. Reyes said by giving the money to Habitat for Humanity it “reduces our leverage.”

He reminded his colleagues that since he and Mr. Carollo took office in late 2017 they’ve been campaigning to start a fund that the city itself could use to purchase land and build affordable housing.

Mr. Russell said Rebuilding Together is already working on projects throughout the city, and has already identified 100 homes that are in need of repairs.

A representative for Rebuilding Together said the organization works on 75 to 80 homes a year, including houses owned by veterans and the elderly, and spends an average $20,000 to $25,000 per home doing critical repairs like laying new roofs, installing hurricane-proof windows and building ADA compliant bathrooms.

Mr. Carollo said he was uncomfortable with the “strings attached” to the new promised funding from Swire.

He said he’s sure Mr. Russell has the best intentions in negotiating the additional money but “we’re getting away from where we were a year ago – I want the city to be in control of the money,” Mr. Carollo said.

Neisen Kasdin, an attorney representing Swire, said the company would agree to the money being paid directly to the city, but he noted the payment would not be made until building permits are issued for the next phase.

Mr. Carollo asked when that would occur.

Mr. Kasdin said the start of construction would be “market dependant” but probably in a two- to three-year period.

All agreed to add the $1 million contribution commitment to the new development agreement.

The expansion plans have earned supportive votes from Miami’s Downtown Development Authority, the Planning, Zoning and Appeals Board and the Urban Development Review Board.

Besides two more residential towers, the proposal would add nearly 90,000 square feet of commercial space, a ground-level plaza, more parking, and enhancements around and under the South Miami Avenue Bridge.

■A second development agreement between Tobacco Road Property Holdings LLC, BCC Road Improvement LLC and 2 Indian Creek Holdings LLC and the City of Miami to govern the third amendment to the previously approved SAP, by expanding the boundaries to encompass two additional building sites identified as the BCC 650 SMA and BCC AP blocks.

This summer, Swire formally applied for the third amendment, incorporating the two added city blocks, which are northwest of the existing Brickell City Centre, which began vertical construction in 2013.

The towers are to be connected by pedestrian bridges to the existing Brickell City Centre, and Swire plans an extended paseo, or walkway, along South Miami Avenue from Southeast Fifth through Seventh streets.

Although not technically part of the Miami River Greenway, these improvements south of Fifth Street will coordinate directly with the growing Greenway-Riverwalk, and open up pedestrian connections to the river from Brickell City Centre and South Miami Avenue that don’t now exist.

Once this phase begins, it is expected to require three years to complete, according to Swire.