Advertisement
The Newspaper for the Future of Miami
Connect with us:
Front Page » Opinion » A holidays gift: transit ridership takes a turn for the better

A holidays gift: transit ridership takes a turn for the better 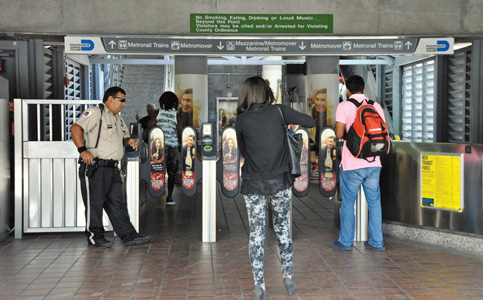 Has Miami-Dade transit turned a corner? Are years of rider losses near an end? Is spending on new trains and buses paying off?

Suddenly those questions become relevant because evidence – though not yet final – indicates that transit use might be stabilizing. And while we prefer gains, we can’t gain riders until we end losses.

The evidence is deep inside statistics that transit operators just unveiled. They show that in October, transit use declined only 0.8% from the prior October.

So why cheer a dip? Only because it’s been more than 3½ years since the system has done even that well in a month (back in March 2015, we had a 0.9% ridership gain). Most of this year – other than September, a freak month because in the prior September a hurricane halted transit – transit use has had double-digit losses every month, peaking at a 14% fall in May from May 2017.

Moreover, October actually saw fairly large gains in riders on both Metrorail and Metromover, coming as officials just voted to add a rail line in the county’s north end. It’s easier to get private partners or government aid for rail when use is growing.

■Metrobus rides fell only 3.3%, which other than the September anomaly was the smallest percentage loss since 0.1% in May 2014, The last year-over-year monthly gain for bus riders was 0.1% in December 2013.

Multiple reasons may underlie transit’s sudden spurt. We shouldn’t look a gift horse in the mouth to examine its teeth, but this gift horse does need analysis to see if we can expect to keep improving and, equally vital, to find ways to leverage the gains.

Transit is joined at the hip to the economy. The more of us at work, the more who commute and the more likelihood that some of those new commuters will ride transit.

Unfortunately, no employment growth is shoring up transit. As we reported Dec. 6, as transit use was stabilizing in October the county’s labor force shrank and the number of people actually at work fell more than 38,000 from May’s all-time high.

More likely to be keeping passengers on transit is the wide perception that driving in Miami-Dade is getting worse, at least in predictability.

The less predictable a drive, the more appealing a mass transit trip. And the county has been focusing on transit predictability. A one-hour transit trip appeals more than a car ride that might take only 40 minutes or maybe 90, because a driver must allow for a 90-minute trip while a transit commuter on a reliable route need allot only 60 minutes.

Metrorail’s 2.8% gain may be due in part to an infusion of new trains replacing rail cars build in the 1980s. The more pleasant the ride, the more appealing.

The same could be said for compressed natural gas buses the county is adding, replacing diesels now more than a decade old. The more routes with new buses, the more comfortable are commuters. The county already has ordered 300 CNG buses and is on the brink of buying more to replace every diesel. New equipment is a psychological gain.

So why is Metromover gaining the most ridership by percentage without new equipment?

First, it’s free. More important, more people every day live and work in Downtown and Brickell, which the system serves. The more potential riders and the worse the downtown traffic, the more incentive to ride Metromover above the traffic and avoid roadblocks of the Brickell Avenue Bridge.

Another Metromover plus: many new residents and workers are young, urban and without private cars. For them, it’s Metromover (free) or Uber.

One more possible reason for a slowing of mass transit’s decline: perhaps most people who have a choice in commuting – such as private autos – already have exercised that choice during recent years of massive transit exodus. If so, fewer people are fleeing county transit not because it has improved but because they’re stuck to it.

Hard evidence, however, shows this isn’t true of most transit riders. A study we reported Dec. 6 found that only 17% of transit riders had no alternative to the system.

Given the evidence, it’s time for the county to leverage transit gains.

Some of that is already occurring. Every Metrorail car is being replaced in coming months. The county is already ordering CNG buses for every route. Bus routes are being rationalized and some have been privatized in the past month.

The other half of leveraging gains is to promote the hell out of them. If service needs fixing, fix it. But then promote every gain in every way possible. Transit will never pay for itself, but luring more riders would add fares to help fund upgrade costs.

Highlighting gains is vital as government pushes through plans for six new transit legs to stitch together a blanket of routes that will make present services much more useful as they go more places.

Hard evidence of actual reasons for all transit gains will make it easier to sell expansions that the county targets. It’s easier to sell more transit when it’s attracting more riders than when riders are fleeing.

Again, it’s too early to trumpet a reversal in ridership. It’s like trying to call an economic boom based on one month. Economists need six months or more to give such opinions.

But at least we have the gift of one good transit month – for the first time in years.

So, to rewrite “The Night Before Christmas,” let us exclaim “Merry Christmas to all, and to all a good ride.”

2 Responses to A holidays gift: transit ridership takes a turn for the better