Advertisement
The Newspaper for the Future of Miami
Connect with us:
Front Page » Business & Finance » Grove garage getting new terms, to play key role in Regatta Harbour 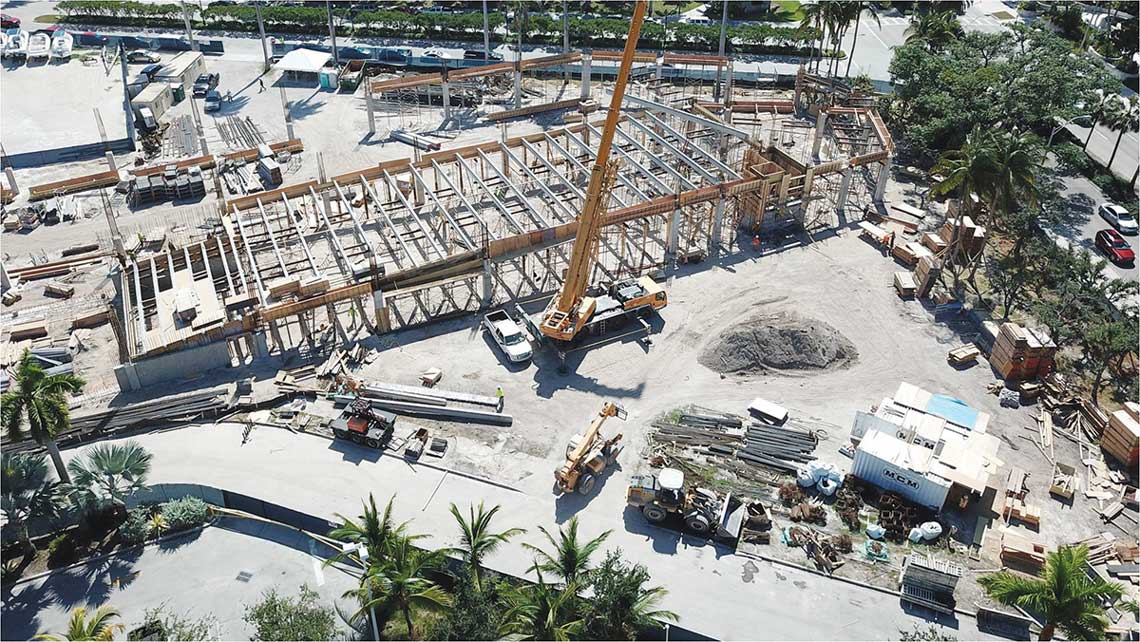 Miami’s newest parking garage is expected to be finished next spring, playing a key role in a new development on the Coconut Grove waterfront called Regatta Harbour.

The City of Miami and the Miami Parking Authority are partners in the public-private partnership bringing the new garage and related development to the site, and city commissioners are today (12/13) set to consider amendments to the agreement.

The proposed changes are needed due to delays of the overall project and of the municipal parking garage, which will be hugged by retail shops when completed.

After being stalled for years by litigation, neighboring construction, underestimated costs and a hurricane, work commenced on the garage and associated uses this summer and fall.

On tap today is a resolution authorizing the city manager to execute the first amendment to the Grove Bay Parking Facilities Agreement among the City of Miami, Grove Bay Investment Group LLC and the Department of Off-Street Parking, which governs the parking authority.

The amendment will reduce the size of the garage and retail areas, change critical dates to coincide with the current construction schedule of the garage, and allow a rent abatement of $58,333.33 monthly for two years.

In the summer of 2013, the city commission agreed to lease waterfront property to Grove Bay Investment Group LLC for $1.8 million a year upon completion and the commitment to invest millions for privately-funded improvements to redevelop a marina, construct restaurants, improve the baywalk, fund part of the garage and make other improvements.

The project will redevelop the city-owned waterfront north and east of Miami City Hall and includes the realignment of Charthouse Drive to open up views of Biscayne Bay.

A major component of the project will be the Grove Bay Parking Garage, built and operated by the parking authority, under the control of the city’s Off-Street Parking Board.

The public parking facility was redesigned after bids came in more than double what was expected.

The parking agreement amended an Oct. 24, 2013, lease between the city and Grove Bay of city property at 3385 Pan American Drive and 51 Chart House Drive.

The amendments to the lease included obligations of the Miami Parking Authority (MPA), city and Grove Bay related to parking uses, retail space and corresponding duties of Grove Bay and its “permittees” to use the parking facility.

“The additional time needed to value engineer the Parking Facilities caused critical dates within the Lease to be missed by the City which would call for the return of the Initial Parking Trust Fund Contribution in the amount of … $1,242,500 to Grove Bay and release Grove Bay of their obligation to pay the entire Parking Trust Fund Contribution totaling ($4 million),” it reads.

The garage is being built by Munilla Construction Management (MCM).

The lead developer of Regatta Harbour is The TREO Group. Grove Bay Hospitality, a partner, will operate the on-site restaurants.

Upon completion in 2020, the entire project will include over 100,000 square feet of retail, services and restaurant space.

Historic airplane hangars, used in the early 1900s as the first continental Naval air station and later as Pan Am Airways’ base of seaplane operations, will be preserved and renovated as an homage to the area’s culture and history, creating about 40,000 square feet of unique setting for a gourmet food hall, specialty market, fitness or entertainment concept, according to the developer.

Adding to the project’s offerings is a rooftop event space with views of the city and bay. Aptly named Harbour Terrace, the area will connect the second-floor portion of the restaurants, with 6,000 square feet of air-conditioned interiors and 7,500 square feet of outdoor space – each able to accommodate up to 300 people.