Advertisement
The Newspaper for the Future of Miami
Connect with us:
Front Page » Profile » Ariana Fajardo Orshan: Leading 200-plus prosecutors as new US attorney

Ariana Fajardo Orshan: Leading 200-plus prosecutors as new US attorney 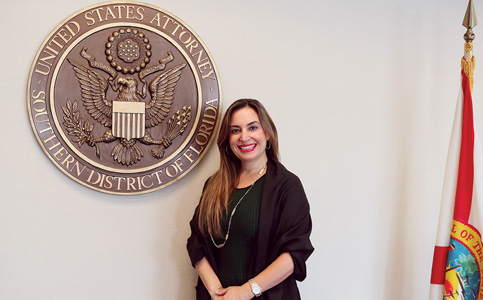 As US attorney for the Southern District of Florida, Ariana Fajardo Orshan presides over more than 200 federal prosecutors in a demanding district encompassing nine counties.

The former Eleventh Judicial Circuit Court judge, who since 2012 primarily ruled over family cases, began as an assistant state attorney in Miami-Dade focusing on narcotics and organized crime before entering private practice with her future husband.

Her Aug. 28 confirmation by the US Senate marked the first time a woman completed the formal congressional process for the federal position she was sworn into less than a month later.

But though she was less concerned with historic firsts than deserving her role based on merit, she said she understands what her earning the job represents to young women hoping to succeed in their future careers.

“When you go through any process, you want to achieve your goals based on your hard work, ethics and reputation, not because you’re male or female,” she said. “I didn’t start this mission [because] I wanted to be the first woman US attorney [here, but] once it sunk in and I looked at girls in my family – nieces and daughters of friends – I [realized] this is paving way, that I’m part of that history. I want other girls to take that step.”

Ms. Fajardo Orshan, a Miami native who until recently taught at FIU’s College of Law, sat down with Miami Today reporter Jesse Scheckner. The interview, recorded by Jahmoukie Dayle, can be found Friday at http://bit.ly/2uNHy0Q.