Advertisement
The Newspaper for the Future of Miami
Connect with us:
Front Page » Top Stories » The great unknown: how long will I-395/836 project take? 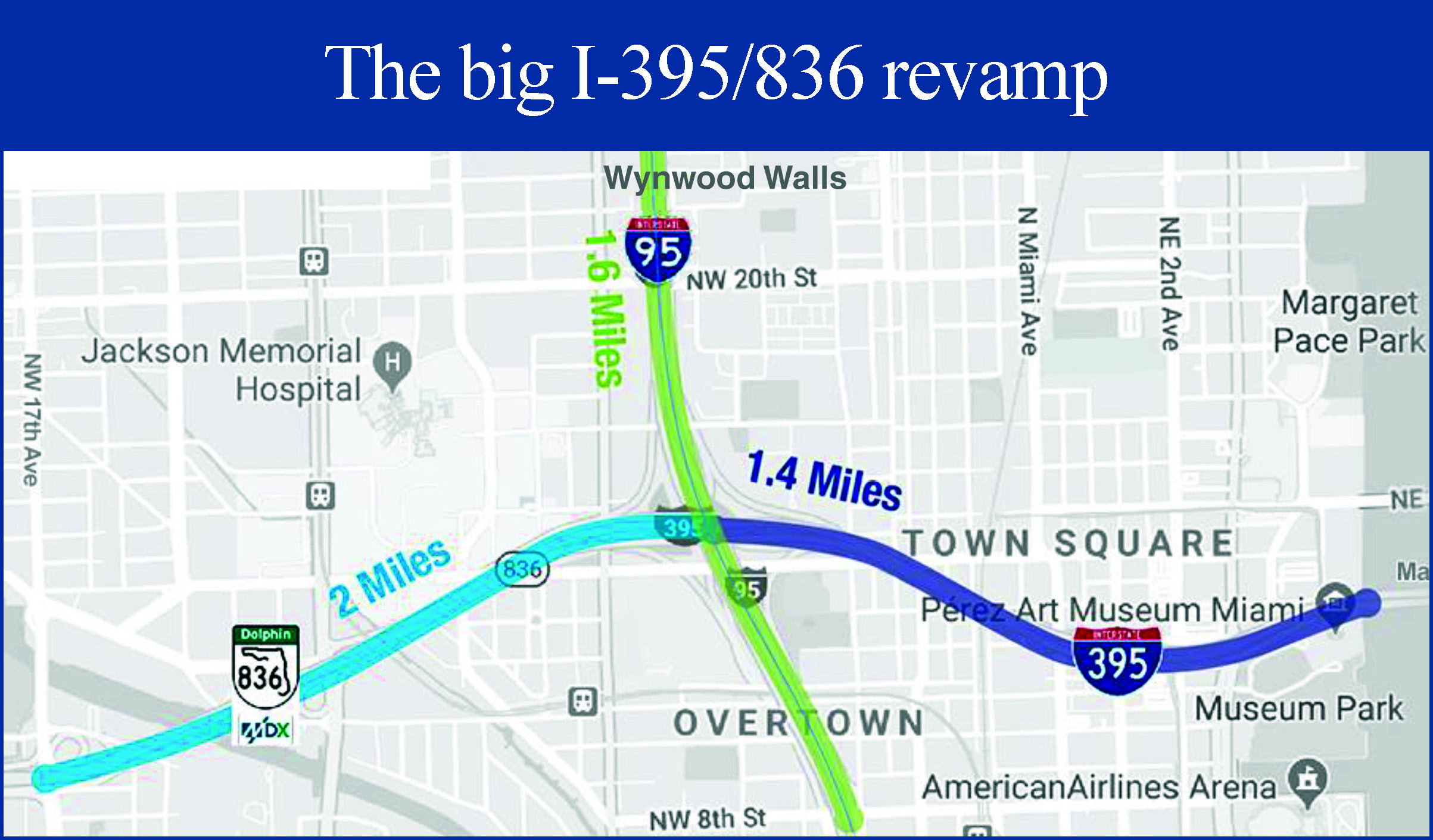 With work finally beginning on a major three-part road improvement project through the urban core of Miami, a new Miami-Dade County commissioner is calling for clarity.

Anticipating years of questions from constituents impacted by the road and bridge construction, Eileen Higgins was asking some of her own on Monday.

This was part of the Miami River Commission’s monthly meeting at which an update was presented on the I-395/SR 836/I-95 Design-Build Project.

The $802 million project is a partnership between the Florida Department of Transportation (FDOT) and the Miami-Dade Expressway Authority (MDX). The work includes a “signature bridge” over Northeast Second Avenue and Biscayne Boulevard, and an upper deck of traffic built over SR 836 and the Miami River.

Shortly after starting a presentation on the project, Senior Community Outreach Specialist Oscar Gonzalez was interrupted by Ms. Higgins.

He said the project is expected to take four years to complete.

She said she’s heard the project will take a minimum of five years to complete.

“We have to communicate … We really need a rational time-line,” she said.

Ms. Higgins said this would be her third meeting hearing the status of the major project and she implored the project representatives for clearer communication, from how long it will take to exactly what portions of roadway will be impacted.

The slide show from Mr. Gonzalez and MDX representative Gil Portela listed the project’s “Contract Time” as four years, followed by an asterisk.

The clarification notes: “*Contract time does not reflect days added to the contract for holidays, weather days or special events.”

Ms. Higgins, expressing some frustration, basically called upon the project representatives to be precise and explain the expected duration of the project, and its scope, in order for her to be able to deliver solid and accurate answers to the residents she represents.

“Can you put ‘Regular People Time’ in parentheses? That’s what we are,” she said.

In October, an FDOT official told city commissioners the construction could take 4½ to 5 years.

Ms. Higgins stressed the importance of clear communication with the public as this major work commences.

“It makes you look bad… if you say four years when it’s six,” she said.

Mr. Gonzalez continued the slide show and spelled out some of the parameters of the planned work including construction limits on SR 836 beginning at Northwest 17th Avenue and continuing through the SR 836/I-395/I-95 Midtown Interchange to the Mac
Arthur Causeway Bridge. The limits on I-95 are from Northwest Eighth Street to Northwest 29th Street.

River commission member David Maer asked about the reference to Midtown in the description of the project’s reach.

Ms. Higgins interjected: “It’s not in Midtown.” She said the work is nowhere near Midtown and to use the term is misleading, again calling for clearer communication from those controlling the project.

Ms. Higgins’ comments came four days after she and other elected officials had a site visit to a section of Flagler Street being rebuilt by FDOT.

She posted photos of the “destruction” project, which some have said turned Flagler into a war zone, on her Twitter page. Critics of the project complain the work has left Little Havana torn up for far too long and is hurting small businesses.

In one tweet accompanying a photo, Ms. Higgins wrote: “Sorry if I look disgusted & mad, but I can’t help myself. Today, we met with yet another small business owner hanging on.”

The three-part project including the “signature bridge” is tagged as “Connecting Miami” in the latest slide show from the state and MDX.

The presentation says the project focuses on community, safety, mobility and sustainability.

“Our community will be enhanced by reconstructing I-395, including an iconic bridge over Biscayne Boulevard that will allow for the connection of Overtown, Downtown Miami, Omni, and Edgewater to each other by a contiguous trail that includes community activity areas,” it says.

Preliminary construction has now begun, it says, with major construction anticipated to begin in February and March.

Pier construction along the river is expected to begin in August and September 2019, and vibration monitoring equipment will be utilized during drilled shaft/pile driving operations.

Construction will be in phases to minimize construction impacts to the public, the presentation says.

In the next six months, these activities are planned:

■Construction along I-95 in the median and begin concrete replacement.

■Widening portions of SR 836 in preparation for double-decking.

■Construction of the I-395 bridge foundations.