Advertisement
The Newspaper for the Future of Miami
Connect with us:
Front Page » Profile » Donna Shalala: Targeting breakthroughs on transportation, immigration 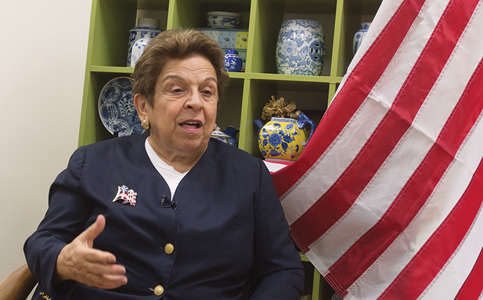 Few can claim to have charted as adept a path through public and educational service as Donna Shalala, who last month showed she was far from done working by becoming the second-oldest freshman to the US House.

One of the first volunteers to serve in the Peace Corps in the early 1960s, her efforts building an agricultural college in Iran foreshadowed decades of university faculty and administrative service that in 2015 concluded, for now, with a 14-year run as president of the University of Miami, where she oversaw about 50,000 student graduations and 5,000 jobs created, and raised billions in endowments.

“For most [university] presidents, it’s not the buildings, money raised or stature in the community; it’s the people that got high-quality degrees [and] the fact it’s very hard to get into the University of Miami now,” she said. “It has wonderful employment [and] a $6 billion impact on the community. No other institution can say they created as many jobs, had that kind of impact.”

Before her eight years as Health and Human Services secretary in the Clinton administration – the longest stint in the position’s history – she chaired the Children’s Defense Fund, was a founding member of EMILY’s List pro-women political action committee, and for three years acted as assistant secretary for policy development and research at the Department of Housing and Urban Development under President Jimmy Carter.

Her numerous other academic and administrative laurels include a Presidential Medal of Freedom, Nelson Mandela Award for Health and Human Rights, and induction into the National Women’s Hall of Fame.

But Ms. Shalala, who won’t assume her new role until January and thus cannot list contact information, said she focused not on accomplishments while campaigning but what she could achieve once there.

“My emphasis was [to] hit the ground running [when] I arrived in Washington, that I had a lot of experience, [know] the issues [and] more importantly [my] district – that I’ve lived [here] for almost 20 years, my grandparents lived in the district, my aunts and uncles, my cousins grew up [here], and I know [it] very well,” she said. “But you don’t run on your résumé. You run on your energy, representation and ability to get things done. The campaign was about getting things done.”

Ms. Shalala, who in 2017 resigned as president of the Clinton Foundation after about a year’s service, sat down with Miami Today reporter Jesse Scheckner. The interview, recorded by Jahmoukie Dayle, can be found Friday at http://bit.ly/2uNHy0Q.