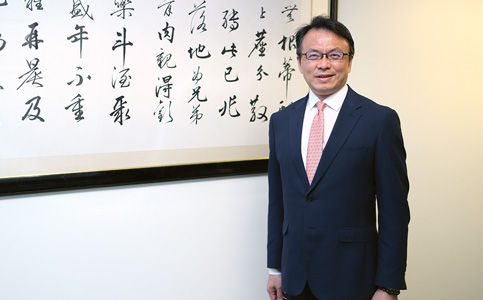 As director general of the Taipei Economic and Cultural Office in Miami, David K.C. Chien helms the diplomatic, consular and economic development headquarters of his home country in representing the Republic of China (Taiwan) in Florida, Puerto Rico, the US Virgin Islands, Bermuda, the Bahamas, the Turks, the Caicos Islands and, in solely consular services, the Dominican Republic.

Mr. Chien, whose middle initials, K.C., stand for his Chinese name, Kuan Chou, began in his current role May 8 at a plastics industry convention in Orlando, where he spoke to attendees about Taiwan’s economic partnerships with the US and its many manufacturing industries.

It was his first public appearance stateside since he was tapped for the position by the Ministry of Foreign Affairs of the Republic of China following previous office holdings in San Francisco and New York.

That same month, Mr. Chien visited Food For The Poor in Coconut Creek to help in providing for the needy, particularly Haiti, to which Taiwan sent 6,100 metric tons of rice in seven shipment through November.

Since then, Mr. Chien said, he has worked in the interest of his country, its people locally and across the ocean and in strengthening the shared interests that tie them and Florida together.

“There are three main parts of my job,” he said. “The first is handling consular affairs, like visas [and] passports. The second is [collaborating with] the local government and private sector – [chambers] of commerce – to promote bilateral relations with Florida. And the third is to assist [citizens] of Taiwan in Florida and protect their rights.”

Gregarious and cheerful but serious about his work, Mr. Chien said he enjoys meeting people and developing ways to help his countrymen succeed and find happiness in the Sunshine State.

“We have a lot of Taiwanese Americans residing in Florida,” he said. “I will do my best to achieve my goal to promote Taiwan not only in Florida [but] also other places around the globe.”

Mr. Chien sat down with Miami Today reporter Jesse Scheckner. The interview, recorded by Jahmoukie Dayle, can be found Friday at http://bit.ly/2uNHy0Q.