Advertisement
The Newspaper for the Future of Miami
Connect with us:
Front Page » Top Stories » Miami’s Bayfront Park to be open to public many more days 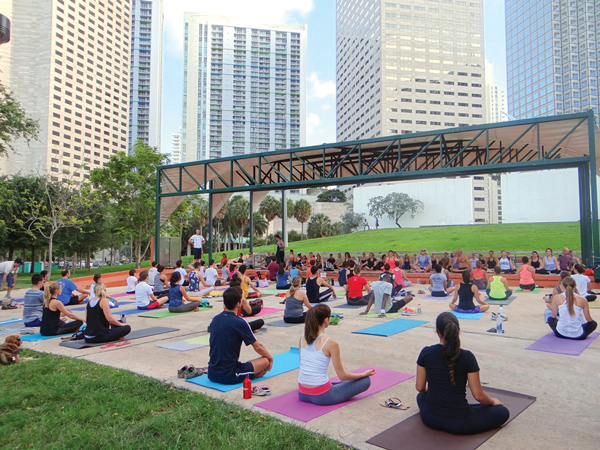 Miami city commissioners came through on a promise to increase the reservation of free access and use of Bayfront Park by the general public to 85% of the year.

The legislation approved Nov. 15 limits the number of events per year that can close Bayfront Park to the general public, excluding some special purpose facilities like the amphitheater, vessel docks, and events with existing agreements.

The decision comes on the heels of the biggest change to the park’s event calendar in years, a major move by commissioners that garnered a chorus of thank-yous from many people who live downtown, across from or near the park.

On Sept. 27 the commission unanimously rejected a new multi-year agreement with producers of the Ultra Music Festival seeking to continue using Bayfront Park, which is hugged by Biscayne Boulevard and Biscayne Bay downtown.

The latest legislation was sponsored by Commissioner Joe Carollo, who said it’s designed to ensure more public access to Bayfront Park, and more use by city residents.

Mr. Carollo said he heard from newcomers to downtown living that they desired more use of the park, as many lodged strong objections to the electronic music festival continuing to be staged at the high-profile venue.

Before the change, the city code allowed Bayfront Park to be reserved “for community use” 50% of the days of each year.

On first reading Oct. 11, commissioners amended the proposal taking out the word “community” so it reads free access for “the enjoyment of the general public” for 85% of the days of each year.

In the legislation, the park is identified as a showcase municipal park centrally located in downtown Miami.

“The Park is managed by the Bayfront Park Management Trust, created for the purpose of ensuring maximum community utilization and enjoyment; and … in the past decade more residents have moved into Downtown Miami and they are desirous of increasing the community use of Bayfront Park,” it reads.

The ordinance says that it is in the interests of the public health, safety, recreation, and general welfare to make Bayfront Park available to the general public for most days of the year.

Before the second and final reading and vote, downtown resident Fran Fenton spoke in favor of the legislation, and expressed a desire to see the waterfront park host “quieter, smaller, kinder and gentler events” going forward.

At the Nov. 15 meeting, Commissioner Manolo Reyes was successful in amending the ordinance to allow commissioners to waive the restrictions to allow for special, one-time or temporary events, to afford a bit more “flexibility” in operating the popular park.

As for the fate of the Ultra Music Festival, commissioners voted 4 to 1 Nov. 15 to approve a revocable license with the concert producers to host Ultra at two city-owned sites on Virginia Key, beginning with the 2019 show. Commissioner Ken Russell voted no.

In regard to concerns about the impact the music festival will have on the barrier island, Mr. Gonzalez said, “We will continue to work with Ultra to ensure that our sacred natural resources are protected, and to mitigate any negative impacts to our residents.”