Advertisement
The Newspaper for the Future of Miami
Connect with us:
Front Page » Business & Finance » Miami Worldcenter to feature work by acclaimed German artist 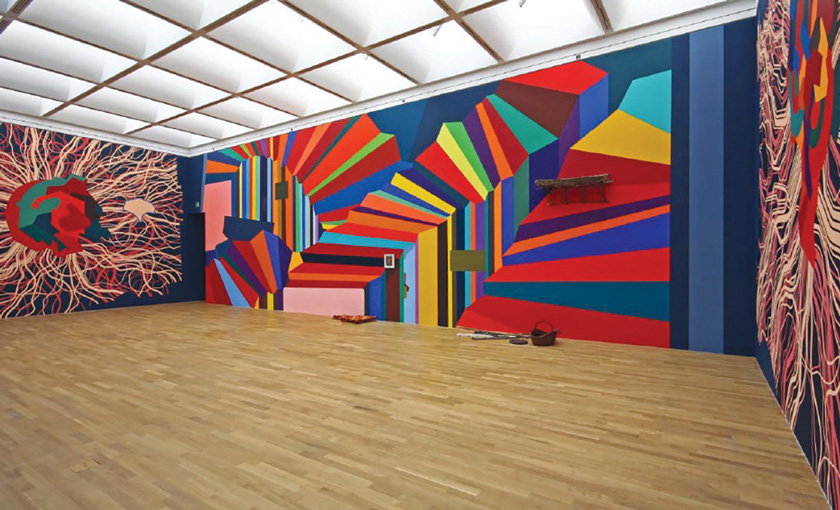 The evolution of the Park West neighborhood of Miami continues with the construction of Miami Worldcenter, a sweeping mixed-use development offering a little bit of everything – including artwork from an internationally-acclaimed painter and installation artist.

German artist Franz Ackermann has been selected as the initial artist for the project. His work has been featured worldwide, including at the Tate Museum of Liverpool, the Venice Biennale, and the Museum of Modern Art in New York.

Attorneys for Worldcenter appeared before the city’s Urban Development Review Board on Nov. 14 with more detailed examples of the artwork Mr. Ackermann plans for a parking garage adjacent to Metromover’s Park West Station.

They brought a scale model of the proposed art piece, and provided board members with renderings of other paintings by Mr. Ackermann, including murals at AT&T Stadium, formerly Cowboys Stadium, in Arlington, TX, that he completed in 2009.

Miami Worldcenter is billed as a $2 billion project out to transform about 27 acres of the city’s urban core, bringing condos, apartments, hotels, a convention center, and a 330,000-plus-square-foot shopping center.

In January, a team representing developers Miami Worldcenter Associates LLC met with the review board to gain approval of proposed façade changes to a large retail and parking structure and the selection of Mr. Ackermann as a key artist.

The board makes recommendations to the planning director.

A motion to recommend approval of the changes, with conditions, was passed on a vote of 3-1.

The two conditions required the developer to meet with the planning director and show elevations for the garage before and after changes were made to make the structure appear less top heavy, and to explain why the design had been simplified. Also, the specific artwork to be displayed as part of this portion of the development next to the Metromover station was required to come back to the board for review.

No vote was taken Nov. 14. The board members generally liked the proposed artwork.

“I commend the developer and the artist,” said Chairman Robert Behar. He said he believes it will be a great installation that people will enjoy for a long time.

But he did voice a concern about the harsh South Florida weather’s impact on the painting, particularly panels that will face east.

“It would be a shame if it fades,” said Mr. Behar, suggesting proactive measures to make sure the artwork stays vivid as long as possible.

A memo to the city from the developer’s team explains some of the maintenance plans for the artwork.

It reads: “Mr. Ackermann will personally maintain the installation for a minimum of five years. Original paint will be stored on-site for easy access. Standard, ready-available paint colors will be utilized for ground-level portions of the installation; i.e., areas more susceptible to general wear and tear.

“All paint shall be certified for external use, with special consideration given to UV, rain, and salt exposure. Together with the artist, [Miami Worldcenter] will establish a plan detailing the accessibility of each panel of the installation, whether by lift, ladder, or some other means.”

In an October letter, Mr. Ackermann explained the work he intends for what is known as Block D-East of Worldcenter.

“My artistic work deals to a significant extent with questions of urbanism,” he writes. “In large scale, strongly colored paintings and murals I attempt to incorporate personal experiences, events as well as architectural and topographical facts.”

He said as a result of expansive conversations and on-site inspections, he has developed an artistic design that addresses the geographical and topographical conditions and enriches the future, urban situation in its entirety.

The title of the art piece is Sailing Hammocks.

“Friendly, welcoming, curious, demanding … ‘Sailing Hammocks’ will become a mural according to the size of the area. It is carried out in three phases and profoundly connects with the planned architectural façade elements. The wall painting ‘literally’ protrudes into the three-dimensional space and thus merges with architecture to create a homogeneous appearance,” he wrote.

“‘Sailing Hammocks’ welcomes the cruise ship passengers of the nearby port of Miami as well as the working people on their daily commute to work in automobiles as well as the Metromover. It is intended to offer visitors, tourists, business people and consumers a landmark, a meeting point.

“As [Miami Worldcenter] invests heavily in residential products and the overall retail and urban experience, it was important for me to create a mural that also radiates serenity, sovereignty and is conceived as ‘nonchalant’ as if you were at home,” concluded Mr. Ackermann.

Worldcenter is a collaboration of Miami Worldcenter Associates and a team of development, design and engineering firms. The entire development promises a mix of residential towers, hotels, retail stores, restaurants, entertainment venues and a convention center to an area hugged by AmericanAirlines Arena and All Aboard Florida’s MiamiCentral train station