Advertisement
The Newspaper for the Future of Miami
Connect with us:
Front Page » Real Estate » Miami Beach agrees to taller tower at its front door

Miami Beach agrees to taller tower at its front door 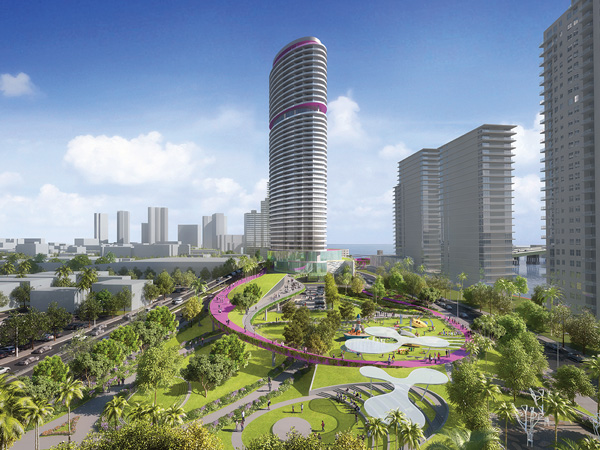 After 4½ hours of presentations and discussions, the Miami Beach City Commission agreed  to a height of 519 feet, up from 484 feet, for the tower development on 500-700 Alton Road, at the entry to the city from the MacArthur Causeway. A 3-acre park will be deeded to the city as part of the deal.

Commissioners passed the package of ordinances for the development unanimously on first reading Nov. 14. The ordinances would create a single zoning district that would allow for the floor area ratio (FAR) credits to be accumulated in the tower to open up the development for the park, the closing of Sixth Street at the site, changes to future land use categories and land development regulation amendments. The project’s final design and operations will have to go through the Design Review Board and Planning Board processes after the commission’s second reading.

One of the most contentious aspects of the development, allowing hotel rooms and short-term rental, was taken (almost) off the table by the developer, Russell Galbut.

However, there is a way that it could come back at second reading. Mr. Galbut proposed only nine hotel units in order to offer extra amenities to residents, but it wasn’t approved on first reading. With additional details, that aspect could be reconsidered at Dec. 12’s commission meeting where the development will come for a second reading and public hearing.

According to Miami Beach Planning Director Tom Mooney and city staff, nine hotel units “is much more manageable” than previous committee recommendations of 60 units or 20% of the total units, whichever would have been less.

Mayor Dan Gelber and Commissioners John Aleman and Ricky Arriola supported the “amenity units” with the possibility of a provision that the number of hotel units couldn’t ever increase.

Hotel and short-term rental uses have raised concerns in the city’s committees, the commission and with residents that it could create more traffic and take away from the residential feeling of the community.

In the current proposal, a 44-story tower will have 410 units and will be in the northeast quadrant of the 500 block of Alton Road, away from other residential buildings. The other parcels in the development, which now have little except for the shell of the old South Shore Hospital and vacant land, will become a series of low-rise buildings with 510 residential units and little greenspace. There will be around 15,000 square feet of retail, down from 75,000.

The city has estimated that the park, in the 600 block, would be worth around $80 million, and the cost to construct it is around $18.5 million. All of that is to be donated by Mr. Galbut and deeded fee simple to the city following the completion.

The sustainable park will have a flood protection basin, native plants, berms, bioswales, water features, green roofs, and a system of elevated pathways. A pink walkway is to make a loop that is one-third of a mile and connect a play area for children, a fitness area, a dog park, an outdoor café and the retail components.

A large open space will be available for farmers markets. There is no longer a tunnel planned for the site and there would only be about 30 parking spaces near the retail space.

Along with the park, Mr. Galbut will also build a stretch of the Baywalk behind 1000-1200 West Avenue with a contribution from the city. A platform will connect the north and south sides of Fifth Street via a pedestrian bridge that is in the General Obligation Bond spending approved by Miami Beach voters this month. Easements will also be provided to ensure pedestrian and vehicle rights of way along with the possibility for an additional lane leading to the MacArthur Causeway.

The zoning changes, which are necessary to proceed, allow Mr. Galbut to accumulate the FAR (floor area ratio) allowed on the entire site and move it to the tower. The project does not require more FAR than is provided, it just needs to be mostly accumulated into the tower. Changing the amount of FAR would require a public vote.

Some have criticized this aspect of the project, saying it violates the city charter by trying to find a loophole and avoid a referendum. But most objections from the community have centered on the hotel components and how quickly Mr. Galbut will build the park and tear down the old South Shore Hospital building.

The old hospital building, considered an eyesore at the entrance to Miami Beach, has not been demolished yet because its allowable height was grandfathered in since zoning in the area changed. If it were demolished before Mr. Galbut received all of his approvals he would lose the rights to the height.

To be able to demolish the building but keep the height, commissioners passed an ordinance to allow Mr. Galbut to demolish the shell as soon as possible. The ordinance will go before both the Planning Board and the Land Use Committee before coming back to commission for a final vote.

The city commission added a provision in the agreement for the park to be completed in four years instead of eight. Over 100 meetings later, the development will come back to the commission in a month for the final vote.