Advertisement
The Newspaper for the Future of Miami
Connect with us:
Front Page » Opinion » Made in Miami brand must manufacture excitement, funds

Made in Miami brand must manufacture excitement, funds 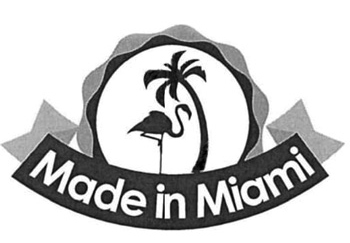 Miami-Dade commissioners last week agreed to have officials explore “Made in Miami” labels for what we make here.

As a point of pride, we’d love labeling of our products. It sounds great to toot our own horn about what we do. If I were offered identical products made here and made elsewhere, I’d want to buy locally, both for pride and to support local industry and jobs.

But beyond pride, serious questions arise about whether branding would be practical – or even worth the effort.

Commissioners have been seeking a “Made in Miami” type of brand for nearly a decade, and two-and-a-half years ago they again asked the mayor’s office to report on whether such a program could work. The report came back this month. That long wait seems to indicate that it has not been a burning issue.

The final study looked at such programs in California as a whole, Chicago, New York City and Madrid. It didn’t dig deeply enough to report how well the programs work, how many products are branded, how the programs are funded, what businesses pay everywhere to participate, or whether the programs have measurably advanced product sales, marketing or area image. Those seem to be key factors in deciding whether Miami-Dade should act. In more than 30 months of research you’d have hoped there would be answers.

But even if we had all the details on those four programs, they might not be relevant to us. That’s because Madrid’s effort is quality-based – not all locally made goods can use the label, just the best – and the three US areas have thriving manufacturing, and by comparison we don’t.

Manufacturing jobs in Miami-Dade are on a welcome uptick, up 15.7% in the past 12 months to 47,200 persons employed in the sector in the county, but in our growing county, manufacturing has nosedived long term. US Bureau of Labor Statistics records dating from 1990 found 88,800 persons in Miami-Dade working in manufacturing then. Our once-strong garment industry has withered.

So one question is, do we manufacture enough to make “Made in Miami” viable? Most of us would be surprised by what’s made here, but is there enough?

The second question is, would the program fund enough marketing and promotion to make “Made in Miami” widely known? When New York City was in trouble four decades ago it spread an “I ♥ New York” campaign around the globe to help it pull out.

Such marketing isn’t free. But last week’s report to commissioners didn’t target either marketing and promotion of the brand or its focus area, and certainly not the cost or where the funds would come from. If we didn’t sell “Made in Miami” widely, it would feel good but have little impact.

The report is clear that there can be no program if industries don’t participate, so meetings with industry groups must determine interest. It’s also clear that those who participate might have to pay to play – kick in a fee to get a “Made in Miami” certification.

But before manufacturers will want to play, they’ll have to be convinced that the seal will be widely recognized and the value of local products heavily promoted. They’ll have to be excited to enter the program, which will require a major push.

If a program is big, it will need experts to evaluate products as to whether they were really made here, another team to sign up participating companies, and for sure strong funding to market the brand name to the public.

In California – the only place where the cost to play was reported – manufacturers pay $100 to $150 to register a product. Even if Miami-Dade were to charge twice that, it would take a lot of $200 to $300 fees to fund program operations, even setting aside the critical external marketing.

The report suggests getting business involved as the next step.

The Beacon Council, our jobs development organization, and manufacturers’ groups should be the first stops. If “Made in Miami” doesn’t excite them, forget it, because there won’t be enough fuel in the program to power it.

If they do get excited, do some simple math before spending years more studying the concept.

First, estimate how many products could earn the label, multiply by $200 or $300 each, and then figure out if the total could possibly pay to verify products, administer the program, sell it to industry and then heavily market the brand to the public. Don’t count on the county or business organizations to pitch in much.

If the numbers don’t add up, tell commissioners it sounds great but won’t fly.

If the numbers do add up and industries are really excited to play, we should all hope to see and buy the “Made in Miami” brand soon – in months, not years.