Advertisement
The Newspaper for the Future of Miami
Connect with us:
Front Page » Opinion » Save Miami’s vital green space from one-sided giveaway 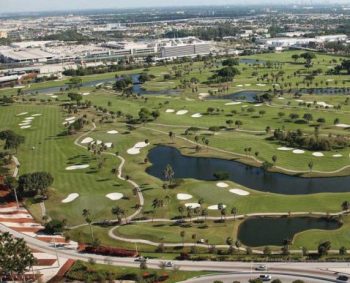 Miamians will vote Nov. 6 whether to convert a swath of city parkland into a massive mixed-use private complex in a no-bid sweetheart deal that would close the only golf course in city limits. They should say no.

Ironically, a key reason the city handed voters this hot potato is that rent and taxes from the developer could help Miami pay damages it may well face in a former green space giveaway to a developer, that one on Watson Island.

The soccer stadium is the shiny lure to hook voters, though it’s a small slice of the project, which is really a real estate and development play on city land.

Though voters should want soccer, they also should turn this down. The team that plans to play there can find other sites – in fact, it bought another site in Miami before this offer, and stadiums here do host soccer. But there will never be another Miami golf course, because that much land is scarce and public golf isn’t profitable, any more than other green space turns profits.

Cities of quality offer amenities that private enterprises don’t. We pay taxes for police and fire, but also for green space and a nice urban environment. Once commissioners start demanding profit from public welfare and amenities, we’re lost.

Miami is no golf vacation destination, but numerous golf bags arrive at Miami International Airport with luggage for those who do find in golf an added reason to visit. Those casual golfers don’t play at country clubs here; they rely on our region’s few public courses like Melreese.

One city commissioner insists Melreese is a country club, and the ballot question says that, but country clubs can cost $85,000 or more to join, whereas anyone can play Melreese in an electric cart for $54, about the cost of a double feature at a luxury theater. Its patrons are among our region’s most diverse.

It’s also the only course in city limits – Miami sold its other one to developers years ago. Lose Melreese and we’d probably be the largest city without golf in a nation of 13,700 courses. That wouldn’t play well to visitors. Even now, Golf magazine lists us 38th in the nation for golfing. We should be number one for year-around golf.

Sports has coveted city parks before. The Marlins wanted to put a baseball stadium in what is now Museum Park. Instead, we got a park plus art and science museums. Baseball built elsewhere, just as soccer could.

Melreese is not just 131 acres of greenery and recreation for many thousands of residents, it’s also a buffer for Miami International Airport, created when the city turned a dump into parkland. It’s smack under a key flight path where federal aviation rules limit building heights. Airport officials worry about the impact of any Melreese development on aviation, and the airport is Miami-Dade’s top economic engine.

After aviation come traffic concerns. Plop a million or so square feet of offices plus retail and commercial and hotels across from the airport and traffic soars. We’d like impartial studies of this addition to the airport area before, not after, locking in development.

The city also hasn’t shown studies on parkland that would remain after handing the bulk of the course to developers. The developers are to leave 58 acres of the public land for a park and to split $20 million into annual payments over 30 years to create and run the park. But how much would the city have to advance to build and operate the park, and would $20 million in today’s dollars cover the full eventual cost by 2048?

The deal voters must evaluate is highly complex. The 75-word ballot language doesn’t inform us how the toxic waste below will be handled and what happens to taxpayers if developers don’t do it properly. It doesn’t list safeguards of the kind that would have prevented the potential legal fiasco in the city’s failed Watson Island marina-hotel complex deal.

But most of all, it doesn’t tell voters how they’d ever get new land to replace the patrimony that the city would sell off. Nobody’s making more green space. The city needs to acquire green space, not get rid of it.

Even if the city were to want to convert most of its golf course to concrete and steel, it should be seeking far more than $3.6 million a year rent where developers expect at least $425 million annual revenue – that’s right, only eight-tenths of one percent of the revenue to taxpayers.

You wouldn’t make that deal; why should the city? Miami should not be in the “going out business sale” business.

Even commissioners who put this plan on the ballot aren’t recommending it. Two of the five voted no, and one of the three who voted yes says he’s actually neutral and wants the voters to decide yes or no.

Our concerns have nothing to do with either the soccer team or the development team. We wish David Beckham and Jorge Mas well. We like the concept of professional soccer and expect it to thrive here in the right site. We like proper mixed-use developments as valuable infrastructure in the right place.

It’s all wrong. Vote no.