Advertisement
The Newspaper for the Future of Miami
Connect with us:
Front Page » Top Stories » Miami-Dade gets a price break in sea level rise studies

Miami-Dade gets a price break in sea level rise studies 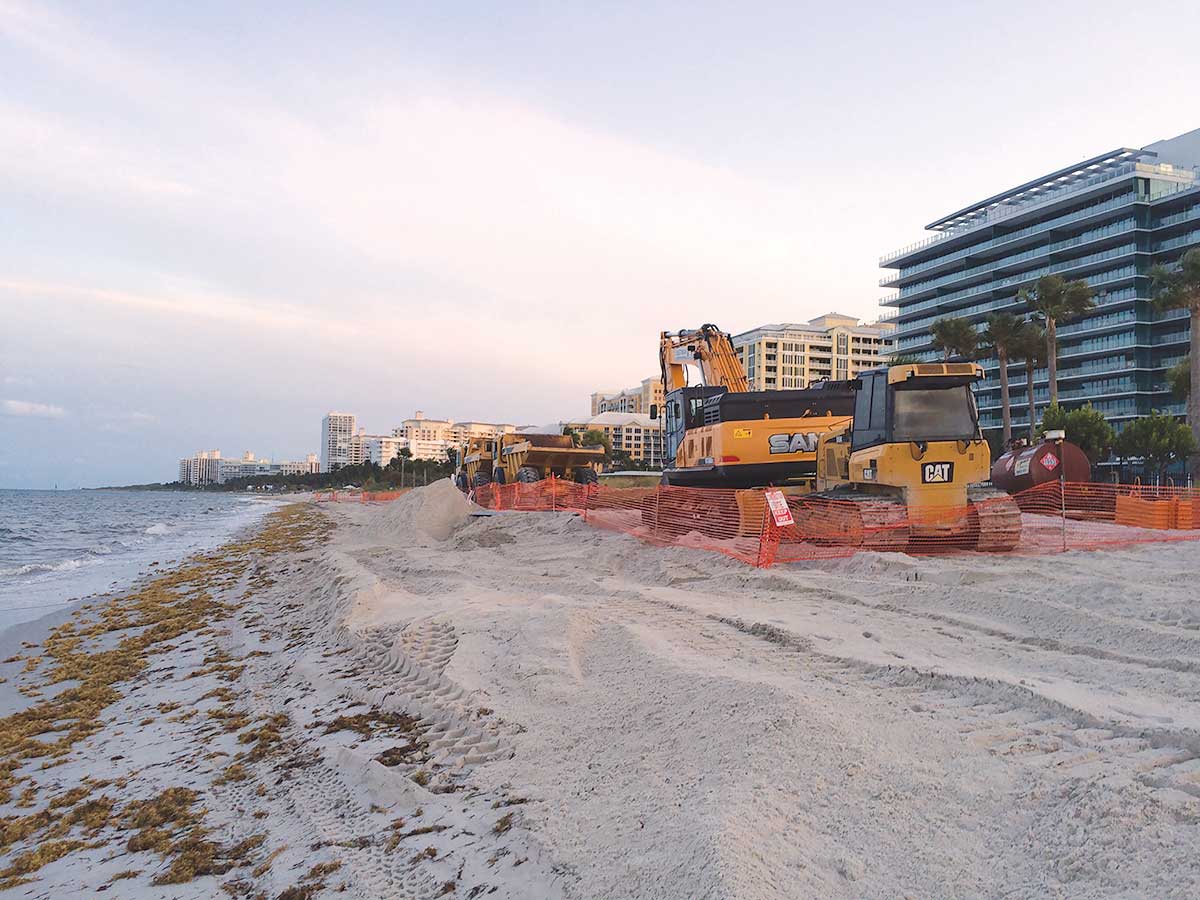 Two $3 million studies to assess Miami-Dade’s risk of storm flooding, sea level rise and the feasibility of reauthorizing a half-century beach erosion and hurricane protection project will commence at no cost to the county.

Miami-Dade and the state normally provide a non-federal cost share for studies and their related projects.

However, the two studies will be entirely funded up to $3 million each as part of over $15 billion authorized by Congress on Feb. 9 for disaster relief construction related to hurricanes Harvey, Irma and Maria.

One project study, the Miami Back Bay Study, will examine the “present and future risk posed by flooding due to coastal storms and sea level rise within the inshore waters of Biscayne Bay and evaluate methods to reduce those impacts,” Deputy Mayor Jack Osterholt wrote in an Oct. 2 memo, adding that the Army could modify the plan, which is still in development.

Under the agreement, an estimated $40,000 in county staff time will be dedicated to supporting the study, which will encompass districts represented by Sally Heyman, Eileen Higgins, Xavier Suarez, Daniella Levine Cava and Dennis Moss.

As a member of the 100 Resilient Cities Program, Miami-Dade and the cities of Miami and Miami Beach are working to “create a tactical roadmap that expresses our community’s resilience priorities and outline specific initiatives for implementation,” Mr. Osterholt wrote. “The Miami Back Bay Study will create opportunities for further collaboration on costal resiliency issues among Miami-Dade County, the federal government and our local partners.”

The other study will determine whether to renew the Dade County Beach Erosion Control and Hurricane Protection Project, a local, state and federal undertaking whose current 50-year agreement expires in 2025.

The study will examine beachfront areas the districts of Ms. Heyman, Ms. Higgins and Mr. Suarez.

“Maintaining the country’s beaches is critical to protecting our residents and infrastructure from the impacts of storm surge, and our world renowned beaches play an important role in supporting our tourism industry,” Mr. Osterholt wrote in the item’s accompanying memo. “Through our long term agreements with the Army, Miami-Dade serves as the local non-federal sponsor for beach re-nourishment activities along 13 miles of coastal beaches extending from Government Cut north through Sunny Isles Beach.”

Miami-Dade estimates $20,000 per year in county staff hours will be dedicated to support the study whose scope, according to Mr. Osterholt, may include:

■Vulnerability of infrastructure and property.

■Computer modeling of rate and transport of sands along Miami-Dade’s beaches and “other sediment dynamics.”

■Adding or eliminating beachfront areas to the project scope, including evaluating the county interest in adding beaches on Key Biscayne.

If the Army engineers determine federal funding is insufficient to complete the study, they will notify the county in writing and will, upon exhausting federal funds, suspend the study until an amended agreement that may include local costs is reached, he wrote.

On Aug. 24, the county received the agreements from the Army Corps of Engineers, which requested they be executed by the county no later than Oct. 15.

Miami-Dade County and Miami Beach will each spend about $9 million through 2024 replenishing and restoring the city’s sandy coastline, together paying about 25% of the cost they share with the state and federal government, Office of Management and Budget Director Jennifer Moon told commissioners in late May.

The current sand renourishment agreement, according to Mr. Hefty, stipulates that all sand used be domestically derived. In recent years, the cost of fulfilling that condition has grown close to prohibitive.

In 2007, then-county Commissioner Bruno Barreiro unsuccessfully lobbied Washington for permission to use foreign sand for beach renourishment. Sand has since been brought from the Bahamas and hauled from Central Florida and St. Lucie County.

That method, Mr. Hefty told commissioners, is inefficient, inconsistent and irksome to residents of those areas.

“Some of the samples we’ve seen don’t exactly match the quality of sand we have down here, plus those communities up there perceive that sand as belonging to them,” he said.

According to the county’s 2006 Beach Erosion Control Master Plan – the most recent plan available from the county, Regulatory and Economic Resources Public Records Custodian Tere Florin said – about 18 million cubic yards of sand have been excavated and transplanted from state-sourced and offshore sites since the initial replenishing project with the Army engineers began in 1975.

“For many decades, we were able to dredge the sand offshore of Dade County,” Mr. Hefty said. “However, most of the easily found sources for sand have been depleted from those areas.”

In 2015, Mr. Osterholt estimated roughly $30 million would need to be spent locally for beach renourishment through 2025.

Between August 2016 and March 2017, some 233,000 cubic yards of sand was laid along more than 3,000 feet of critically eroded Miami Beach shoreline in an estimated $11.9 million contract with Eastman Aggregate Enterprise LLC of Lake Worth.

“Beach renourishment is the front-line of climate change and sea level rise,” Ms. Heyman told Miami Today in July. “If we can’t get the federal government to allow us to use non-domestic sand, we’re never going to have a shoreline buffer.”