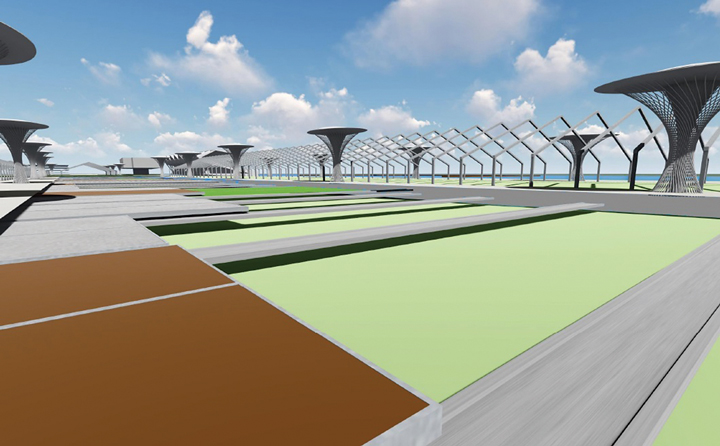 “We need to reclaim the space, without sacrificing what we have.”

That seemed to be the consensus shared by many members of the public who attended a Sept. 20 community workshop hosted by City of Miami planning department officials and a private urban design team working on a plan for the Marine Stadium Flex Park. The so-called flex park is the land and shoreline hugging the long-idled Miami Marine Stadium on Virginia Key.

The historic stadium has been closed since Hurricane Andrew in 1992 and is currently undergoing restoration – a separate project from work on the flex park.

The flex park is basically the repaved massive parking lot that surrounds the stadium, which fronts the historic basin that hosted speed boat races in the glory years of the stadium.

The City of Miami owns much of the island, including the iconic stadium, and has already spent millions to outfit the flex park site to host the Miami International Boat Show.

City commissioners approved spending more than $20 million to create the flex park space – from a new hard surface to electric connections and acres of elaborate tents – with its first use being the 2016 boat show. The show organization has a year-to-year license with the city to use the site. The 2019 boat show is set for Feb. 14-18.

The city commission agreed in June to a contract with Civitas Inc. to provide professional urban design, landscape architecture and engineering services, on a phased basis, for the flex park space.

At the time, city officials said the ultimate goal was to build a world-class waterfront destination with regional importance for a flexible public open space. Civitas presented a variety of potential uses for the space during the Sept. 20 meeting, which attracted more than 60 people to the Miami Rowing Club on the island, next door to the flex park space.

Ideas ranged from a carved-out swimming cove to a fitness hub, a festival street to a resilient green space, and beyond. The reaction from much of the crowd was lukewarm at best, with concerned residents pleading for additional and improved public access, and warning against overdevelopment.

The existence of the boat show and its impact on the island – with its filling the basin with temporary docks and turning the flex park into a massive event space – was cited by residents and officials as an obstacle to developing the flex park.

The resident who spoke at the meeting of the need for the public to reclaim that space was critical of Civitas ideas to redevelop the flex park, with too much emphasis on commercial uses there.

“It seems to me that the commercial use is driving plans … It would be foolish to build a structure in the middle of paradise,” she said.

Another resident took the microphone and said the elephant in the room was the boat show. She said, “We all want green space, but unless the boat show goes away, we have to work around it.”

Key Biscayne Mayor Mayra Lindsay followed up, saying the boat show wasn’t the elephant in the room but rather “the tip of the iceberg” when it comes to overuse of the island, impacting everything from traffic to public access.

The village fought the city at meetings and in court over the boat show. Ms. Lindsay voiced concern about the property becoming a permanent commercial space with heavy use, like 365 days a year.

After the meeting, Miami Today spoke to Ms. Lindsay, asking for her to elaborate on her comments. She said in all of artistic renderings presented it appeared the designs were more about creating a more permanent event and exhibition space than building a park. “I am also troubled that all of this will compete with the Marine Stadium itself, the programming of the stadium and [compete with] encouraging access to the bay and resources there,” she said.

Restoration of the stadium is a separate project, under separate contracts. The redesign and restoration are being handled by R.J. Heisenbottle Architects. Speaking of plans for the stadium and the flex space, Ms. Lindsay said it appears the designers are proposing things “at odds with each other,” which will detract from the success of a reopened stadium.

She said Key Biscayne leaders have always supported renovation of Marine Stadium. “We consider it a treasure for all of Miami-Dade County, and an architectural marvel,” said Ms. Lindsay.

She repeated her concern that possible uses of the flex park would be incompatible with the successful operation of the stadium. “There has to be a holistic approach for everything to work, with more emphasis on public access, and year-around access for residents,” Ms. Lindsay said.

The village mayor said the City of Miami has done some things right, including working on improving the hardwoods and the dunes, and natural replantings, closing access to a wildlife area, and creation of the Virginia Key Advisory Board.

Another speaker complimented the creative designs but said she was there to represent the rowers who often utilize the waters of the basin for sport and recreation. “I hear you there,” said Craig Vickers of Civitas. “We are concerned with the balance of uses in the basin itself.”

He added, “In our grand thinking about the basin, it’s so calm and so different from the ocean and the bay, our intent is to find the right balance. That’s why we’re here.”

Mr. Vickers stressed that the ideas presented for the flex park and island are merely a first step and “nothing’s been baked.”