Advertisement
The Newspaper for the Future of Miami
Connect with us:
Front Page » Real Estate » Lagging North Beach moves closer to ‘renaissance’ 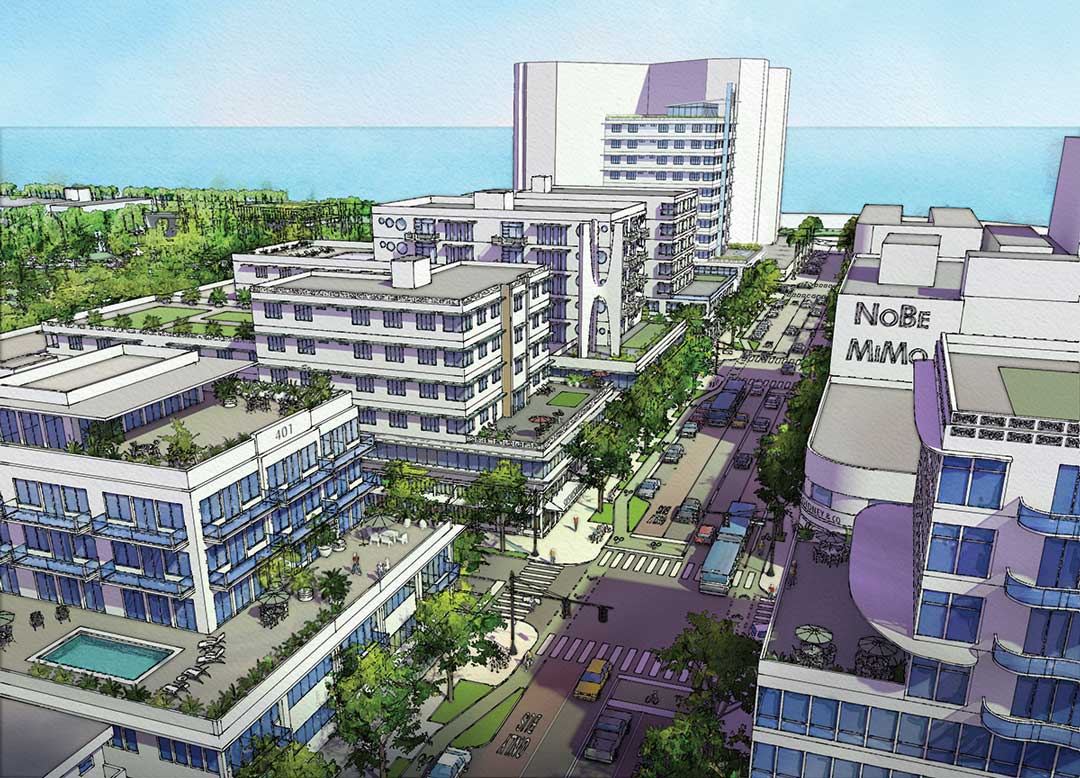 The Miami Beach Town Center – a North Beach area that hasn’t had significant development in 25 years – came one step closer to its “renaissance” last week when the city commission managed to pass two resolutions allowing for taller buildings while setting standards for planned micro-residences.

All the other commissioners voted to pass the changes, which will require a second vote. They include allowing a building to rise up to 200 feet as long as the developer provides public benefits and obtains a building permit within 15 months of the ordinance’s start date, to spur rapid economic activity to get the town center to take off. City staff recommended 15 months because “we have implemented a lot of things to streamline the requirements in the ordinance.”

Revitalizing the city’s northern portion has been officially in the works since September 2015, when the city commission entered into an agreement with Dover, Kohl and Partners Inc. to prepare a master plan for the area. On Oct. 19, 2016, the mayor and commission adopted the North Beach Master Plan that Dover, Kohl developed.

Other requirements include that the micro-units – tiny apartments in buildings with shared amenities – cannot be more than 10% of the total residential units in the project and 20% of space must be for amenities. Hotel rooms are capped at 2,000, and if more than one tower is built, they must be 60 feet apart.

The city commission plans to lay out the exact height and public benefits coming with the development to present for the second vote in November.

Only 150 residential units are to be allowed per acre, regardless of the building height. The first ordinance also allows for two neighborhood fulfillment centers in light of increased e-commerce, artisan retail stores and the creation of a 20-foot street pedestrian paseo on 70th Street. The micro-units must be a minimum of 375 square feet.

Developers wanted to push the allowed height of the project to 240 feet and with only 10% of space in the residential building for amenities. The increase in height is because of a referendum that increased the city’s floor area ratio (FAR) to 3.5 to keep the area pedestrian-friendly, the developers said.

“We were planning to commence construction in September. We paid $1 million to relocate our transformer lines, but there is no palpable commitment that my lenders, the hotel flag or the investors or anyone involved in our project can detect,” said Silvia Coltrane, one of the developers from Collins and 72nd Developers LLC, who is working on a mixed-use project within the bounds of the town center. “We cannot start without your commitment.”

The project recently lost its flagship hotel “because there has been no activity,” Ms. Coltrane said.

Ms. Coltrane’s project is a 187-room hotel with 24 condos and about 20,000 square feet of retail. However, there is a possibility that it will be hotel units instead of condos, Ms. Coltrane said.

“I am negotiating with a very cool flag that wants to have the entire project be a hotel instead of a mix of hotel and condos. I haven’t finalized that,” Ms. Coltrane told Miami Today on Tuesday. “I have a lot of people that are very much interested in this site to bring their flags to the Miami market. Most of the groups want the whole entire project to be a hotel.”

Prominent Miami developers Russell Galbut of Crescent Heights, Mathis Cohen and Robert Finvarb of Robert Finvarb Companies have teamed up with Architectonica to develop other aspects of the project, including co-living residential and micro-units, Ms. Coltrane said. It is one plan with different properties.

The public benefits if the potential buildings do end up being more than 125 feet include both on-site and off-site workforce affordable housing, LEED platinum certification, providing a fully sustainable structure with surplus stormwater retention and reuse and recreation facilities for the general public. The city commission gets to choose which areas the funds go to for public benefits.

“The people who are going to be affected by what we vote on right now, many of them are not here. I think what we’re doing today is going to displace a lot of people who have no idea what’s about to happen,” Ms. Rosen Gonzalez said at the commission meeting. “What is now before you is higher density than what we would have imagined, sold to the electorate over cake and pastelitos. They had no idea what 3.5 FAR means. There is a gross injustice taking place today. What we’re getting are micro-units that can’t be financed. It is tourism-based, it is a gross sellout and it will not be residential, low-density family.”

One Response to Lagging North Beach moves closer to ‘renaissance’