Advertisement
The Newspaper for the Future of Miami
Connect with us:
Front Page » Business & Finance » Miami city budget to add few jobs but two new departments 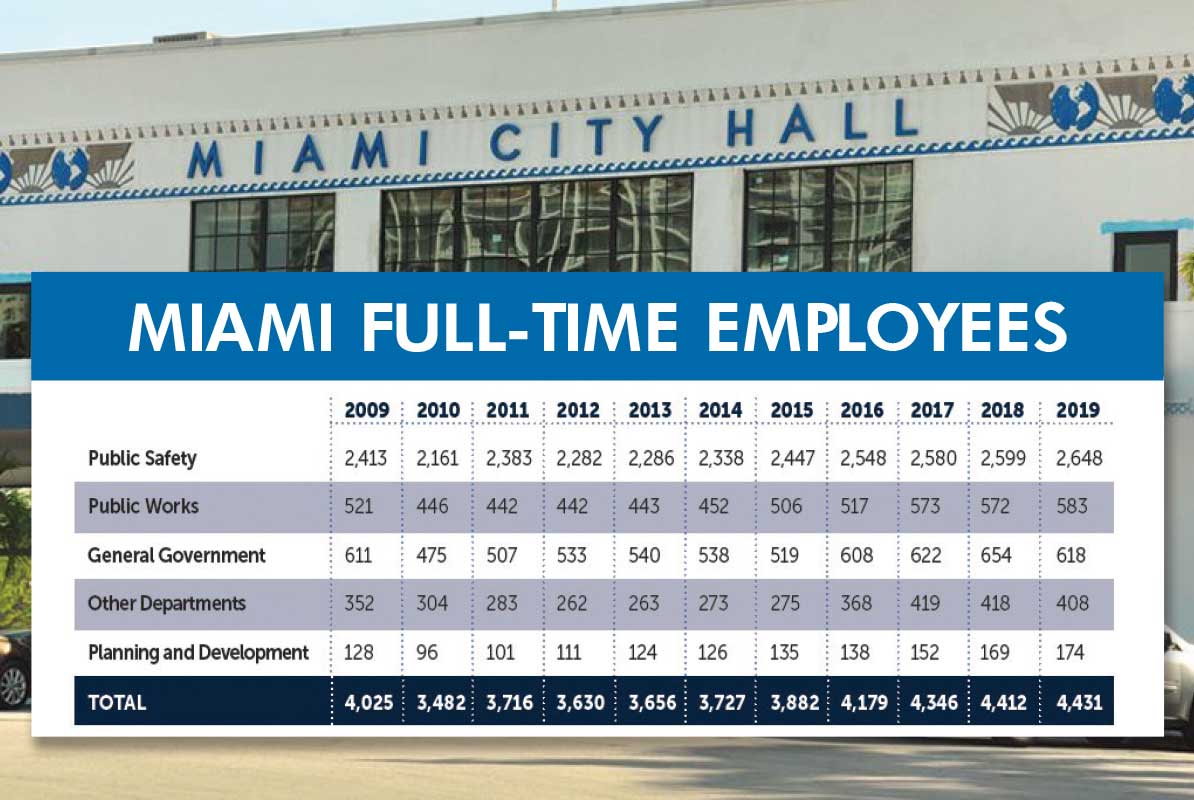 The proposed budget for the City of Miami’s next fiscal year adds a few new jobs while eliminating others that have remained vacant for some time.
The proposed budget for fiscal year 2018-19 also creates two new departments for the growing municipal government.
When the reorganizing is complete, and if the proposed budget is adopted next month, it will mean 19 new full-time positions overall, rising from the current 4,412 employees to 4,431.
It is a much smaller jump in employment than the previous year, when the employee headcount rose by 66 positions.
City officials are looking forward to the two scheduled public hearings on the proposed budgets.
The first is Sept. 13 and the second is Sept. 27. The hearings are set for 5:05 p.m. in the City Commission Chambers at City Hall, 3500 Pan American Drive.
The city’s proposed budget for the new year was released in July by Mayor Francis Suarez and City Manager Emilio T. González.
They presented the city commission with a proposed 2018-19 General Fund Budget of $750,686,000, which is $23.858 million more than the current adopted General Fund Budget of $726,828,000.
“This is the part of the budget that funds the largest number of City functions, has the least number of restrictions on how the funds can be spent, and therefore has the most pressure upon it,” Mr. González wrote in his cover letter.
The city’s proposed Operating Budget for the coming fiscal year amounts to $1.086 billion, and includes a $14 million reserve for labor negotiations and $5 million for beautification projects.
The city manager described the new departments in his cover letter.
“To be more efficient and to provide a greater breadth of wrap-around services to the City’s most vulnerable, we are proposing the creation of a Department of Human Services. This new Department will not create any new positions or grow costs in any way. Rather, by re-organizing the functions of Homeless Services, workforce Opportunity Centers, veterans affairs, childcare services, and Live Healthy Little Havana, the City can create synergies and provide better services to those most in need. Mr. Milton Vickers will be named to head this Department,” wrote Mr. González.
The second change is to merge the Office of Film and Entertainment into the existing Communications Department.
“Again, this will not create any new positions or grow costs in any way. Rather, it will make these functions more efficient by combining their strengths and contacts to improve their coordination,” he wrote.
Mr. González said they are also proposing to eliminate 59 vacant, non-sworn positions from across almost every department and freezing 24 vacant sworn positions (15 in the Fire-Rescue Department and 9 in the Police Department).
All of the sworn positions and most of the civilian positions have been vacant for more than a year. This means that the real impact on services should be minimal and departments will have to find a way to get the job done with these changes, he said.
Personnel costs, including wages and employee benefits, represent the largest general fund expenditure category. These costs account for almost three-quarters of the total general fund expenditure budget.
In the proposed 2018-19 General Fund Budget, effective Oct. 1, salaries and wages amount to $323.3 million, or 43.1% of expenses, and employee benefits total $217.2 million, or 28.9% of expenses.
More than half of general fund spending is allocated to the provision of public safety services. The Police Department and the Fire-Rescue Department together comprise 51.4% of the general fund expenditure budget.
By looking at expenditures by function, the proposed budget has public safety expenditures amounting to $386 million; resilience and public works totaling $85.1 million (11.3%); general government totaling $78.1 million (10.4%); other departments amounting to $65.5 million (8.7%); planning and development totaling $22.9 million (3.1%); and non-departmental accounts amounting to $109.5 million (14.6%).
The proposed overall millage rate in the city, used to calculate property tax bills, will remain unchanged for the fiscal year that begins Oct. 1.
The city commission on July 26 set the overall millage rate for fiscal year 2018-19 at 8.0300 mills.
Final approval of the millage rate, expected in late September, will mark the first time in seven years the city hasn’t lowered the overall millage rate. For comparison, the city’s overall millage rate in fiscal year 2011 was 8.6441 mills.
The city’s proposed Capital Budget for fiscal year 2018-19 is $526,375,000.
The proposed operating and capital budgets are available at the city’s website at www.miamigov.com/budget.