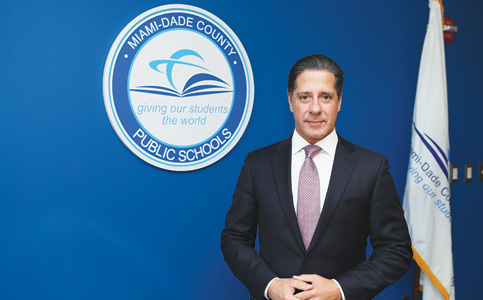 As superintendent, Alberto Carvalho has led Miami-Dade County Public Schools to unprecedented heights, clinching an “A” rating from the Florida Department of Education for the district in June, with zero “F” rated schools for two consecutive years.

But he almost wasn’t here to celebrate the achievement.

On March 1, a day after agreeing to become New York City’s new education chancellor, Mr. Carvalho shocked residents of both districts when he broke off the agreement in an 11th-hour announcement in which he committed to staying on as the county’s top school official.

“When people lined up at all levels – teachers, principals, kids, parents, business leaders – and said, ‘Stay. Give us another chance,’ that really impacted me,” he said. “Second, there’s still work to do. I recognize that.”

Mr. Carvalho’s decade-long stewardship of South Florida schools has generated many improvements, including his lauded creation of iPrep Academy, system-wide accreditation from AdvanceEd in 2014 and the 2012 Broad Prize for Urban Education.

Such successes, he said, sprang from his ability to surround himself with the right people – a boon he’d be without had he left the Sunshine State.

“The level of flexibility in terms of operations – of hiring my own staff, particularly key staff members – would be significantly restricted,” he said. “You cannot ask me to win the Super Bowl but let someone else pick the coach, quarterback, running back and towel guy.”

Mr. Carvalho, who was named 2014 National Superintendent of the Year, sat down with Miami Today reporter Jesse Scheckner in his downtown office. The interview, recorded by Jahmoukie Dayle, can be found Friday at http://bit.ly/2uNHy0Q.