Advertisement
The Newspaper for the Future of Miami
Connect with us:
Front Page » Top Stories » 12.6% Metrobus ridership plunge in 12 months accelerates losses 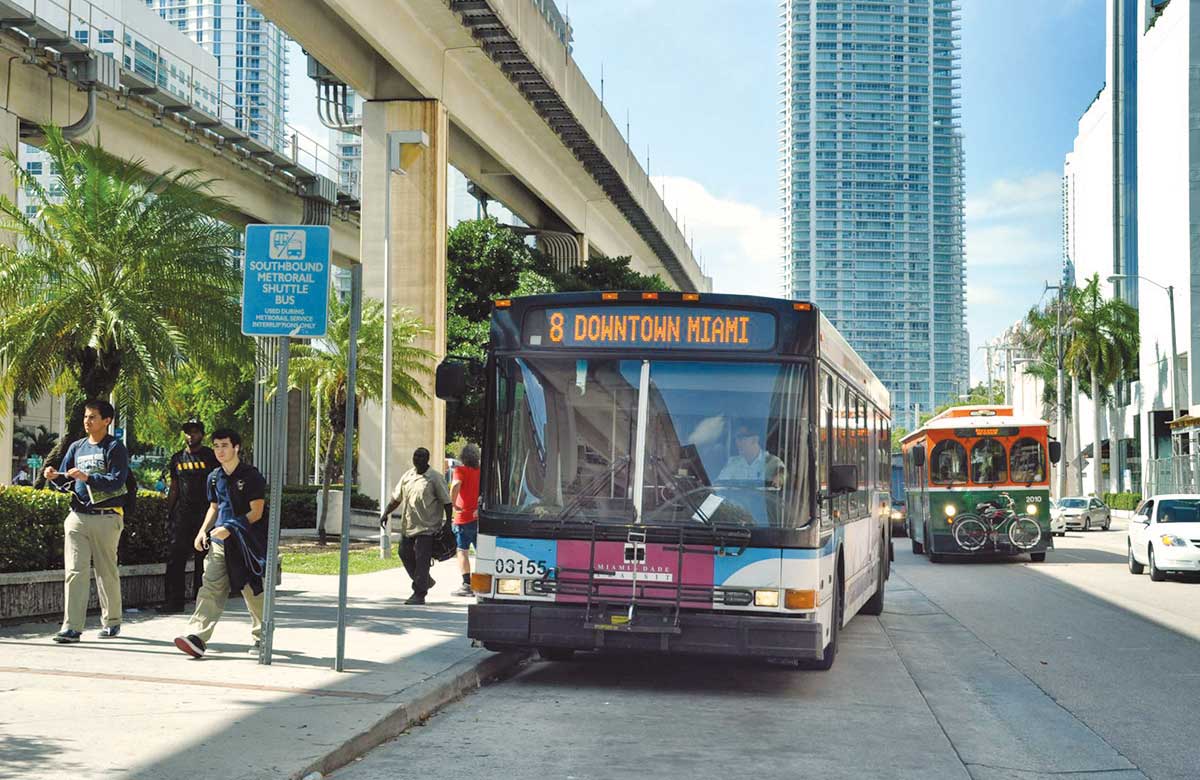 Ridership on Miami-Dade’s public transportation system continues to plunge at an accelerating rate, with drop-offs on the county’s three main modes of transit, according to the most recently available report.
The Miami-Dade County Transportation and Public Works June 2018 Ridership Technical Report, released this month, shows a decline in total monthly ridership on Metrobus, Metrorail and Metromover.
Metrobus ridership declined 12.6% in June compared to 2017 numbers for the same month, for a one-year loss of 577,216 rides – the steepest dip in June since 2014.
In total, Metrobus has lost more than 1.84 million June rides in four years – a 31.5% dive.
The mode is on track to register a 12.9% decline in fiscal 2018-19, with double-digit losses in every month but October.
Long, confusing routes and infrequent, unreliable service is to blame for loss of Metrobus riders, according to Transit Alliance Miami Director Azhar Chougle, who told county commissioners last month they should look elsewhere for examples of how to grow transit usage in a national ridership downtrend.
“When you hear that bus ridership is falling nationwide, yes it is, except for the cities that have taken action to avoid that,” he said, pointing to Milwaukee, Indianapolis, Dallas and San Jose, as well as Palm Beach County and Houston, which hired a specialized consultant to redesign their routes, as areas that have seen their transit ridership improve. “This is something that can be done today without talking about the SMART Plan and new infrastructure.”
But Miami-Dade Transportation Director Alice Bravo says such route redesigns have been ongoing.
“That’s actually something we’ve been doing for the last three years, and on all our different line-ups,” she said. “We have routes that go down a major arterial that took a run into a neighborhood and came out. We’ve tried to streamline our routes so they’re on the major roads. We also do have routes that are considered circulators, and by definition those are supposed to go around. You have to look at the different layers of services we have.”
Things are tough all over, Ms. Bravo said, adding that municipal circulators like trolleys, which have frequently been pointed to as contributing factors to declines in traditional transit use, are also losing riders.
“When you look at the volumes of local circulators, they’re not comparable to the drop in ridership we’ve experienced. They’re significantly less,” she said. “For those circulators, the ridership has gone up because they’ve added service, but other circulators have seen a drop in ridership. I think it’s all about the same thing: people will seek out the most convenient transportation they can afford.”
Metrorail, the second-most-used transit mode in the county behind Metrobus, suffered a comparatively softer drop of 5%, a loss of 81,523 rides, in June compared to the year prior.
June ridership since 2014 for the county’s 22-mile transit centerpiece has fallen 9.6% and is at a pace to match the previous fiscal year’s 6.9% total downswing, despite the county’s 18% increase of Metrorail car frequency during peak transit hours between the Earlington Heights and Dadeland South stations.
Were ridership to remain at this fiscal year’s highest numbers – 1,708,564 in October, the only month to increase compared to the year before – for the next three months, Metrorail still stands to lose 1.9% ridership this year, about 400,00 passengers.
The last year that Metrorail ridership increased was in 2015, when the system, whose 136-car fleet is expected to be replaced by 2020 at $3 million per car, gained 5.4% ridership.
Metromover, the automated people mover circulating downtown Miami, lost a whopping 12.9% of its total monthly riders in June compared to last year, despite being free to ride.
Almost 100,000 fewer people rode the 4.4-mile system this June, the second-lowest month in ridership in four years. (Metromover ridership in September 2017 fell 46.7% after being shut down for repairs after Hurricane Irma.)
Special Transportation Services (STS), a complimentary service for people with disabilities, was the only mode whose ridership grew in June, with 3,030 more riders than in June 2017 – a 2.2% increase in June and a 5.3% jump since 2014.
Overall ridership on all four modes of transit is heading for its first double-digit drop since fiscal 2014, at about a 10.1% since October.
“Historically, as the economy improves and the price of gas drops, you’ll see a drop in transit ridership, and now we have the added factors of Uber- and Lyft-type services,” Ms. Bravo said. “I think people will seek out the most convenient transportation they can afford. Uber and Lyft, they’re offering different products – Uberpool, for instance – that bring the price down. That’s something scheduled at your convenience and takes you door-to-door. People make those decisions on a daily basis.”
Unfortunately, rider choice is increasingly moving away from public transit.
Miami-Dade residents and visitors have exited the county’s system at an increasing rate since 2014, recording a 3.8% drop between 2014 and 2015, 6.9% fewer riders in 2016 and a 9.6% slide in 2017.
Using the highest monthly ridership numbers available this fiscal year – 7,322,886 in October – to fill in the blanks for July, August and September, Miami-Dade’s transit system is projected to lose about 5.4 million rides compared to last year and about roughly 26.34 million in the last four years – a total loss of more than 25.7%.