Advertisement
The Newspaper for the Future of Miami
Connect with us:
Front Page » Communities » Miami-Dade Mayor zaps bid for mini-parks in parking spaces 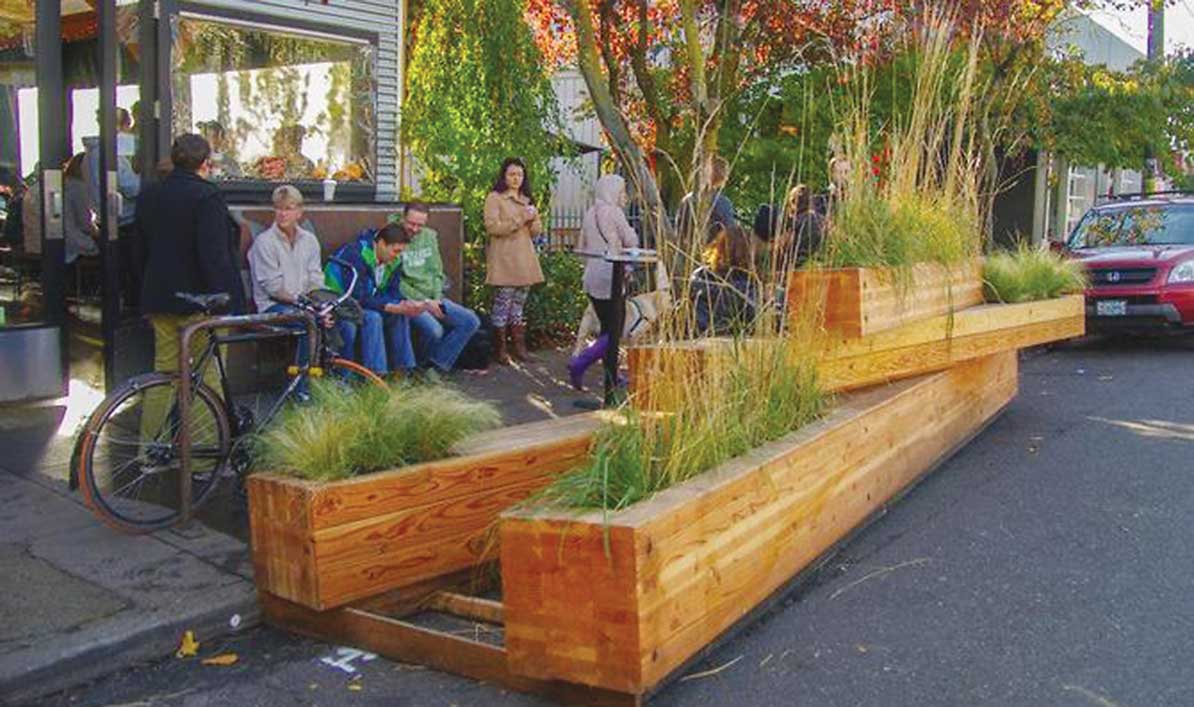 Miami-Dade Mayor Carlos Giménez has zapped a 20-month-old proposal by former County Commissioner Juan Carlos Zapata that would have led to mini-parks, called parklets, spread in parking spaces among streets and roadways around the county. The reason: no money.
At the request of Mr. Zapata, the county commission in November 2016 had voted to order the mayor’s office to create a parklet program, find appropriate locations for the mini-parks and talk with local governments that already had tried the program.
Last month, the mayor responded with a report reminding commissioners that in April of this year he had told them that “without some kind of enhancement to revenues, the county will be prioritizing critical services at the expense of requested enhancements.”
While praising the concept of parklets, the mayor’s memo parked them with a long list of “requested enhancements” that he had already said the county has no money to even investigate fully, much less put to work.
Parklets typically involve placing a platform over parking spaces to bring them to the same level as the sidewalk and allowing a business to place amenities such as benches, tables and chairs onto the decorative spaces.
The concept surfaced, unsuccessfully, in the City of Miami in 2013 and returned in 2016 in Miami Beach. Mayor Giménez’s memo refers briefly to both of those experiments.
In Miami, the city approved a one-year pilot program and two Coconut Grove businesses applied to the Miami Parking Authority for permits to operate a parklet outside their doors.
Mayfair Hotel & Spa at 3330 Virginia St. and Acropolis Greek Taverna at 3484 Main Highway were the first to seek this use of parking spaces after city commissioners approved it, but neither wound up opening a parklet. The Mayfair’s application did pass the initial stage but got no farther.
In Miami, the parklets were limited to two parking spaces – about 40 square feet. Under the plan, parklets could have extended a café or added landscaping or decoration to a storefront. They weren’t to change the sidewalk or roadway but could add green space or provide amenities.
To install a parklet in Miami, a company had to choose the parking spaces it wanted, create a site plan and apply to the Miami Parking Authority.
Eligible applicants included property owners, storefront business owners and tenants, nonprofit organizations and Business Improvement Districts or similar organizations.
Following the authority’s initial approval, the user of the parklet had to pick a designer and apply for a permit from the city’s Department of Public Works, paying a permit fee of about $4,300.
Once a permit was issued, the owner was to pay the authority another fee that would vary by location of the parklet, because it was based on the revenue the parking authority would normally have gotten from those spaces.
In the Miami Beach experiment, the city hoped to enhance the landscaping of Washington Avenue with a one-year pilot parklet program that invited merchants along the corridor to apply for a parking space to use creatively for the public.
Businesses with sidewalk cafes on Washington Avenue from Sixth Street to Lincoln Road could submit a sketch of what their proposed parklet would be.
City Manager Jimmy Morales was excited about the program at the time, saying “The parklet pilot program provides a path for our Washington Avenue businesses to take individual actions in the development and beautification of our city’s public realm. It also reflects our commitment to encourage bicycle and pedestrian-friendly streets.”
A parklet would occupy a parking space in front of the business, using one or two parking spaces. In the pilot program, parklets were only to be allowed in front of sidewalk cafes. The parklet could be used to extend the sidewalk café, as a green open space, as a creative public space or whatever the restaurant had in mind.
The parklet space would have cost the city nothing. The payments, construction and design would come from the merchants. The framework the city used was Portland and San Francisco’s parklet programs.
Dylan Rivera of the Portland Bureau of Transportation told Miami Today at the time that their idea of parklets, or “street seats” as Portland called them, had approval from the public and many of their spaces were used creatively. Apart from the common extensions of cafes, uses in Portland included “whimsical, creative” use of space such as ping-pong tables, artistically designed chairs and landscaping models.
“It was very successful when we first started. It grew over the years. When people see the creative use of public space, they get inspired to do something on their own,” Mr. Rivera said.
A popular effort by Portland was installing bike corrals, a series of four or five bike racks that were popular among businesses and encouraged residents to use bicycles. “They are like bike parking spaces, and businesses have been requesting to convert parking spaces to more bike corrals,” Mr. Rivera said. “We recently installed our 1,000th bike corral.”
San Francisco’s parklet program, called Pavement to Parks, used since 2010, led to more parklets appearing around the city each year. Like Portland, the goals of the San Francisco program were to encourage non-motorized transportation, enhance pedestrian safety and support local businesses.
In Miami-Dade, the mayor’s July 20 memo said, the Parks, Recreation and Open Spaces Department supports the concept but “does not have sufficient staffing and resources to complete a comprehensive analysis to run a parklet program.”
But the department said it’s now in its fourth year of participating in “PARK(ing) Day Miami,” in which the department “temporarily transforms parking spaces into pop-up mini parks for the day to call attention to the critical need for more urban open open space…”