Advertisement
The Newspaper for the Future of Miami
Connect with us:
Front Page » Transportation » Coral Gables bars bike and scooter leasing, takes a spin with Spin 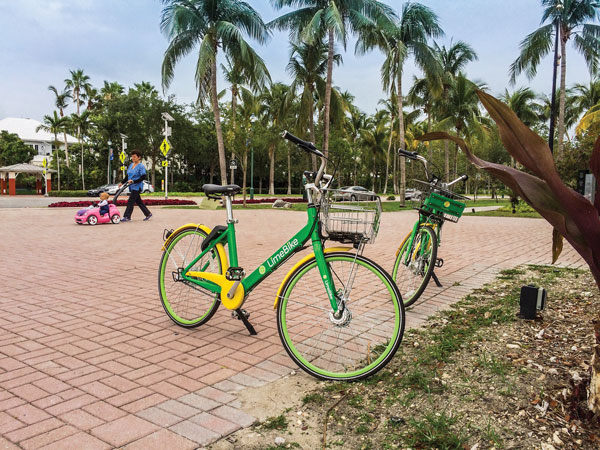 An emergency ordinance to ban shared scooters and bikes passed unanimously on Tuesday at the Coral Gables commission meeting. This ordinance does not stop the city from entering into an official agreement with a shared mobility company.

The commission also voted unanimously on a resolution to allow City Manager Cathy Swanson-Rivenbark and City Attorney Miriam Ramos to enter into a pilot program agreement with Spin, a dockless scooter sharing company that operates successfully in several major cities already, including San Francisco, and in Doral and Miami Lakes in South Florida.

Two shared mobility device companies, Bird and LimeBike, were each served a cease-and-desist letter from the city attorney for operating, unauthorized, in Coral Gables. Both companies have complied, City Attorney Miriam Ramos said at the meeting, under threat of $50 impoundment fees per scooter and an overall $500 fee.

LimeBike is the biggest US-based provider of dockless bicycles and scooters and has accrued “well over 100,000 rides” in Miami-Dade County, according to Michael Llorente, an attorney whose firm represents LimeBike.

The Coral Gables commission decided to reward Spin with the exclusive agreement because it had not deployed any unauthorized scooters in the city. This agreement will last six weeks until the last week of August, when the commission meets again after a break.

After this six-week period, the city can enter into multiple agreements with different companies.

But for the next month and a half, only Spin will be operating approximately 75 scooters in Coral Gables. Drop-off and pick-up points will be designated and a driver’s license will be required to operate a scooter. Scooters aren’t allowed to be driven on sidewalks but they can be parked on a sidewalk out of the way of pedestrian traffic.

Once the six-week grace period is up, the city can impound scooters parked improperly for a $50 fee and possibly a $500 fine. During the pilot program with Spin, someone who sees a scooter parked improperly can take a photo in the Spin application on their phone and Spin employees are to come to pick up the scooter.

Coral Gables will use this pilot program period to analyze the best parking areas for the scooters and put together regulations for all future agreements with shared mobility companies.

Derrick Ko, CEO and co-founder of Spin, said at Tuesday’s meeting that the company will follow whatever rules and ordinances the city wants.

Spin also wants to set up similar agreements with other cities in Miami-Dade County to make its shared scooters even more useful, Mr. Ko said. Spin entered into exclusive arrangements with Doral and Miami Lakes in 2017.

One of the resolutions directs county Mayor Carlos Giménez to crack down on dockless bikes by enforcing existing county code provisions respecting unattended property left on sidewalks and streets. The two others direct him to determine the necessity of regulations and study possible designated parking areas for the bicycles.

Shared scooters and bikes have been a hit with customers in Miami-Dade County. Citi Bike in Miami Beach, North Miami Beach and downtown Miami uses solar-powered docking stations to rent and collect its bikes. Ofo, a company based in China, made its debut in South Miami in 2017. All the companies use mobile apps to help customers find and rent bikes for as little as $1 an hour.

City Attorney Miriam Ramos said that neither LimeBike nor Bird has reached out to the city to try and set up authorized scooters and bikes since the cease-and-desist letters. Only Spin contacted the city with a bid.

“I want to commend the city and commissioners and the mayor for really setting the pace in terms of what a city should do when it comes to approaching new mobility solutions like electric scooters,” Mr. Ko said.