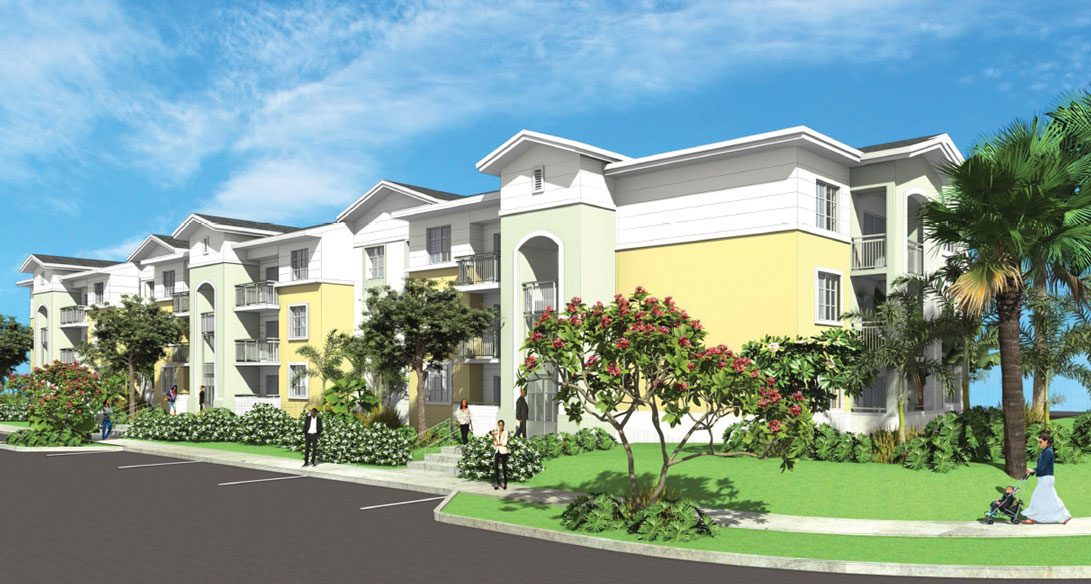 The second phase of a large mixed-use affordable housing project set in the heart of the Liberty City neighborhood of Miami is ready to start, and the developer is working to earn necessary approvals.

The board recommended approval on June 20, with a few conditions. The project was considered at an earlier meeting, but the board wanted more information, particularly how Phase 2 would relate to its surroundings.

County leaders planned to invest about $46 million into the overall project, which was to include a grocery store, about 1,380 residences, 15,000 square feet of neighborhood shops, a community center, health center, Head Start center for children and more.

Phase 2 is between Northwest 65th and 67th streets and 13th and 14th avenues.

The plan calls for 204 garden-style apartments in three-story buildings. The site plans shows 204 parking spaces in the site’s interior.

Ivo Fernandez Jr., principal at MODIS Architects, went over details of the evolving mixed-use development, designed to revive the neighborhood.

He explained the graduated residential plan that is to include affordable housing and workforce housing, comprised of rental apartments, and townhomes for sale described on the site plan as “home ownership townhomes.”

The full redevelopment is to include a village green, a youth enrichment center, on the south five- to eight-story residential buildings and ground floor retail, a centrally located public park, and housing for the elderly in the central western block.

Mr. Fernandez mentioned the community outreach on the project. “From my standpoint, there’s been a vigorous process with the community,” he said.

The plan is the result of collaboration, he said, “a compilation of everybody’s input.”

Hopefully, all of the open spaces will cater to all residents of Liberty Square, said Mr. Fernandez, who mentioned that an historic community center building will be renovated and brought up to code and design standards.

The overall plan may also bring sporting fields and a pool.

A full grocery store is a key component of the overall plan, and Related plans to anchor the grocery on one of the corners.

Mr. Fernandez said the sweeping Liberty Square project offers the developer’s team the chance to think outside of the box, while striving to design the new buildings to become part of the fabric of the city.

Cars can access the Phase 2 residential area at two points. The block will have sidewalks, landscaped medians, pedestrian crosswalks and green space in and around the interior parking spaces.

Mr. Fernandez acknowledged some earlier concern by the review board about “anywhere” architecture for the project – nothing special.

He said he understands the comment but noted the county conveyed to Related that it wants a more traditional look for the residential buildings.

He said the developer will employ scoring techniques and color variations to help bring some variety to the buildings.

Board member Gerald Marston thanked the team for a thorough presentation, but said he’d wanted to see more development of the architectural façade.

“One of the shortcomings is that it tends to all look the same,” he said. “I’d like a little more differentiation on the facades … anything that doesn’t drive up the costs but makes the buildings look distinctive.”

Based on earlier comments, the developer tried to place air conditioning units on the roofs but the costs were excessive.

Board member Ignacio Permuy thanked the team for taking on the historic project, but he did take issue with placing the air conditioner condensers in front of the buildings, calling them an eyesore. He said he liked that the parking was basically hidden and suggested moving the condenser units in the back as well.

Board member Fidel Perez said it is a well-planned project. He did question the timing of some of the planned phases, and suggested the central community park be developed now, rather than leaving that piece to the end.

“Sometimes things do not go as planned. You may be on hold,” said Mr. Perez. “My point is that I’d like to see the center part now. Do it in these early days … this project – as big as it is – could take several years.”

“Since the last time I was critical of the project, I am pleased to see you’ve taken our comments to heart,” Mr. Hall said.

He also suggested moving the condensers behind the buildings.

Mr. Hall suggested further community outreach, to get more residents informed and involved in such a large impactful project.

“The public should be engaged. This is important,” said Mr. Hall, after noting he saw no community members in the audience.

The board voted to recommend approval of Phase 2 with these conditions: the developer consider moving the condenser units into a rear location; study the alignment of buildings, roofing materials and color scheme with an eye toward more variety; try to find a way to move up development of the central community park; and work to ensure trees represented in renderings are as close as possible to actual landscaping used at the property.