Advertisement
The Newspaper for the Future of Miami
Connect with us:
Front Page » Top Stories » Miami adds a rail crossing in Miami Design District, subtracts two others 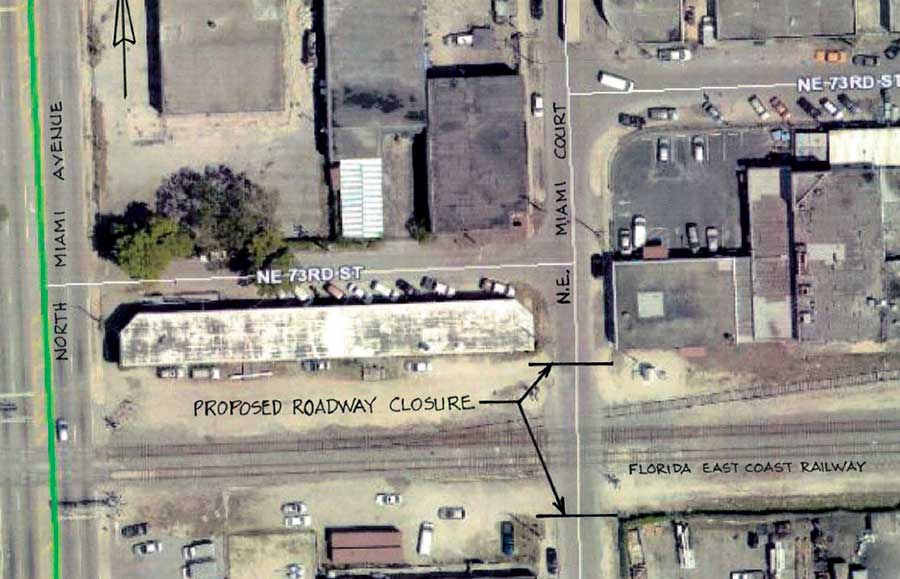 City commissioners last week approved a new roadway across the existing railroad crossing at the northeast corner of the Miami Design District, the closure of two street railroad crossings – one at Northeast Second Avenue – and a plan to build a pedestrian bridge over railroad tracks near Northeast 17th Street.

The changes come just after the Florida East Coast Railway tracks got notably busier with the debut of Brightline passenger runs linking downtown Miami, Fort Lauderdale and West Palm Beach. Brightline’s launch is mentioned in some of the legislation.

Commissioners authorized the city manager to sign an agreement between the city and Miami-Dade County for the Northeast 42nd Street from Northeast Fourth Avenue to Federal Highway road improvement project.

“The improvements are a result of the coordination efforts between the Florida Department of Transportation, County and the City with regards to the arrival of the Brightline passenger train in the City and County in 2018. Therefore, the City and County wish to facilitate the construction of a roadway improvement project located within the municipal limits of the City,” the resolution says.

The project consists of a new roadway across the railway crossing.

Other roadway enhancements are to include traffic signals, street lighting, sidewalks, ADA ramps, curb and gutter, drainage improvements, and modification to on-street parking.

The city is to construct, manage and administer the project, with the county contributing up to $1,401,000 for the work.

The Florida East Coast Railway requires that for every railroad crossing added, two existing crossings must be eliminated. The two to be eliminated are about 200 feet at the Northeast Miami Court crossing between Northeast 71st and 73rd streets, “and the other crossing will be North and South bound along NE 2nd Avenue at the NE 36th Street crossing,” a background memo says.

Commissioners also approved a perpetual aerial easement with the railway to build a pedestrian bridge at Northwest 17th Street above the rail right of way. Currently pedestrian and vehicular access across the railroad is limited to locations where road crossings exist.

Dorsey Park is on the west side of the railroad at Northwest 17th Street. Residents east of the rail line must go several blocks to the north or south to get to the park.

This easement will allow for the construction of an elevated pedestrian bridge for walkers and cyclists to easily and safely traverse the railroad to access the park and other areas to the west.

The legislation says, “The city desires to construct, install, inspect, maintain, and use an elevated pedestrian bridge for Northwest 17th Street above a portion of the existing railway corridor … for the use of the general public.”