Advertisement
The Newspaper for the Future of Miami
Connect with us:
Front Page » Opinion » Now playing on Flagler: umpteenth Groundhog Day remake

Showing, now and seemingly forever, on downtown’s main thoroughfare is the Flagler Street version of the film Groundhog Day.

Every few years Miami’s Downtown Development Authority cites tremendous progress on the remaking of Flagler Street in a wonderful new design that’s going to serve downtown better than ever before.

We’ve been reporting that at least as far back as 1993. A quarter of a century later, it has yet to happen.

Blame who you will.

Last week we reported once again that the whole cycle of a wonderful new plan, finding the money, trying to get the work done and then starting over once again is back at square one with a grand new $27.572 million plan complete with a $10.34 million shortfall to get it done.

We expect to report soon that the missing money has been found, then that contractors have been hired, then that the work was harder than expected, and then that someone has a better idea for a new plan to start over with.

The last plan five years ago was a railroad theme for Flagler Street honoring Henry Flagler. The tycoon’s railroad jump-started the development of Miami, whose population before the railroad was announced in 1896 numbered in the hundreds.

Money for that project was found, Flagler Street property owners even assessed themselves $1 million for some of the costs, contractors were hired, but work went slowly because of unexpected complications and new contractors were brought in.

Then the Downtown Development Authority called time out, over and over.

Finally, this month, as Catherine Lackner reported for us, the development authority agreed to adopt a new and better plan, creating a “festival street,” yet to be defined exactly but certainly not a railroad theme.

We’re back at the station on Groundhog Day with a $27.572 million plan for the street, not the paltry $5 million to $10 million that the development authority laid out as the cost when it set out on the railroad theme five years ago.

Moishe Mana, who has invested in multiple downtown properties, offered the “festival street” plan. “This is a phenomenal development,” said Neisen Kasdin, the authority’s vice chair. “This is huge progress.”

It’s déjà vu all over again. 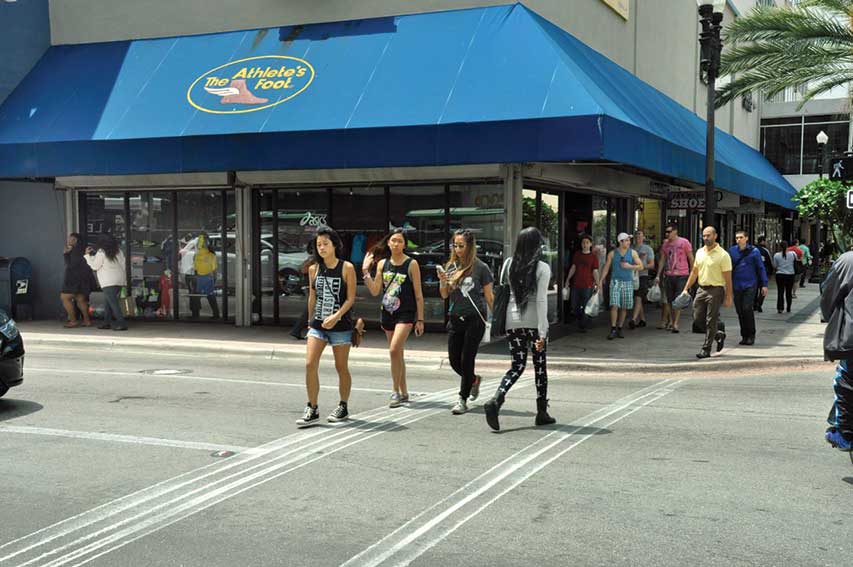 Flagler in 2014, after the last remake and awaiting railroad theme that will never arrive.

Like the 1993 film Groundhog Day, where actor Bill Murray painfully relived the same day over and over, we’ve been getting the same show on Flagler for decades. We’re still waiting for the happy ending.

Each time, the development authority deemed the timing right, plans solid and funds attainable. But success has been as hard to find as the end to Groundhog Day.

A quarter of a century ago, Carr Smith Associates unveiled the Flagler Marketplace Corridor study, at that time the third such study the development authority had commissioned in a 13-year span.

The theme was to repave Flagler in the vibrant colors of the 1920s and 1930s, with wider sidewalks and a way to make cars “almost like an intruder in a pedestrian area.” The cost was $10 million.

By 1997 the authority was citing city support for the then-$12 million plan. “We’ve got the invoices ready to go,” said Executive Director Patti Allen. “It’s now a matter of the money coming in so we can pay.”

By June 1997 the now-$13.6 million plan was rolling ahead, Miami Today’s Ms. Lackner reported. “We’re working on a package to move that forward and have it before the city commission before the August recess,” she quoted a city official.

But merchants worried that they couldn’t fund the then-$14.5 million facelift. “I just don’t believe the city has the funding to do the entire street,” said Sergio Rok of Rok Enterprises.

By 2000, however, Flagler was nearing the end of the long road with its by-then $15 million renewal, Ms. Lackner reported. “Once funding is approved,” said a development authority staffer, “a schedule will be put to it.”

But that November, the authority’s chief of staff revealed that plans had changed: “We’ll be taking a completely new, unconventional approach.”

The project finally got done. It was new, it was unconventional – and it didn’t work.

“Miami surprised by another bill for Flagler Streetscape project” was our headline on a 2006 report, with the main contract at $9 million but its costs soon rising to $11.9 million.

“Mistakes were made on this project,” said city Commissioner Tomás Regalado. “We cannot keep approving more money for this even though Flagler is a very important street in the City of Miami.”

The re-done sidewalks wound up uneven and cracked, and nobody seemed to approve of the finished streetscaping.

Enter then the railroad theme with the aim of replacing the last prior renovation of Flagler. Property owners along the street decided to tax themselves for some of the costs, but with the city in tight circumstances the development authority looked to the county for funds.

“The owners’ involvement is very compelling, and it will be difficult for the county to say no,” said Mr. Kasdin in 2013.

He was right. The county did add $6 million for the project. The city OK’d a $1 assessment of property owners, sent the contract out for bidding in 2014 – but only two contractors bid, and the city required three.

In 2015 the city tried again and got the needed three bids. Work was going to take 18 months. But then the city found design flaws – plans didn’t allow enough drainage.

“Our biggest concern is that this doesn’t drag out,” said Mr. Kasdin, who may have foreseen Groundhog Day playing out again.

Toward the end of 2015, as the development authority sought over and over for a start date for the railroad-themed project, board member Gary Ressler, said, “This is farcical. We’ve been hearing this ‘two weeks’ story for six months.” To which Miami Commissioner Marc Sarnoff replied, “Let’s have some faith.”

His faith was rewarded – sort of. Construction work did begin in January 2016. “We have turned a page,” said Eric Riel, leader of the development authority’s planning, design and transportation team. “I believe the contractor will make up the lost time as construction proceeds.”

Not exactly. By autumn the city had ruled the contractor in default and the firm was to be ordered off the job. “This is incompetence and it’s our place to tell the city,” said authority board member Richard Lydecker.

After that, the contractor stayed on the job, and by December, progress was reported. “Trees have been installed, the pavers are in and the sidewalks are almost complete” on the first two phases of the 13-phase project, said authority board member Brian Alonso.

At that time a completion date was set for July 2018. You can stop reading right here if you’ve noticed any of that progress toward completion by next month.

Mr. Ressler nailed it: “At this rate, it will take a decade,” he said then. He was far more correct than he knew.

By last July, with only a single block of the project completed, a new firm had been hired to do the work with plans to start last October using three shifts of workers of necessary. Things were so bad that the authority arranged concessions for Flagler Street business owners, including waivers of some fees and free weekend parking.

But by December, the development authority was saying work from the courthouse to Biscayne Boulevard would be done in 2017. It wasn’t.

In February of this year, the authority voted to delay all Flagler Street renovations for 90 days to consider Mr. Mana’s suggestions for his new plan, which would include raising the roadbed slightly and eliminating curbs to create a festival street, at a $6 million addition to costs and a three- to three-and-a-half-year addition to the work schedule. Then in May, the authority voted for another 30-day delay for the same reason. 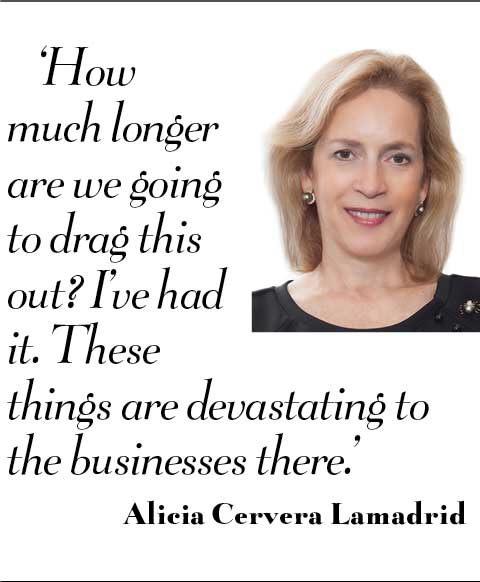 “How much longer are we going to drag this out?” asked board member Alicia Cervera. “I’ve had it. These things are devastating to the businesses there.”

When the revamping of Flagler was first proposed around 1980, it was a dying retail street in a downtown dead for everything but offices. It is now in the heart of a vibrant new area of restaurants and clubs, filled with towers packed with young residents, and directly between a real vibrant shopping area at Brickell City Centre and another one planned for Miami Worldcenter.

Maybe a “festival street” is needed for Flagler, or maybe downtown could thrive very well doing nothing but avoiding tearing up the streets once more for a great new plan.

It might be that the last thing Flagler really needs is the next showing of Groundhog Day with a new cast and a new script but the same old plot – announce it, plan it, finance it, get going on it, and then start all over again.

Get your tickets now.