Advertisement
The Newspaper for the Future of Miami
Connect with us:
Front Page » Real Estate » Half of Biltmore’s rent to restore historic hotel

Half of Biltmore’s rent to restore historic hotel 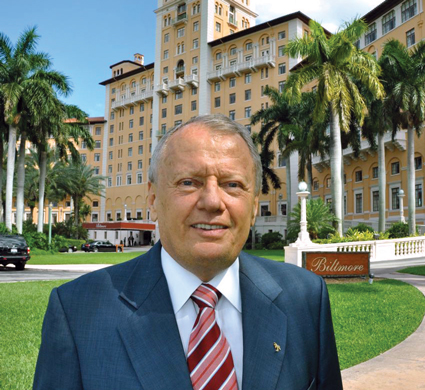 The Coral Gables City Commission voted unanimously last week to allow the Biltmore Hotel Limited Partnership to redirect 50% of annual rent payments to the city to the building’s historic preservation, paying up to half of the historic monument’s improvement costs.

The city attorney and the city manager are to meet with Biltmore officials to draft the five-year agreement.

City staff and the historic preservation officer’s staff reviewed a list of needed capital improvements provided by the Biltmore. They determined that about $10.5 million of the $25 million total renovations were targeted to preserving the historic value of the hotel, which the US Department of Interior designated as a National Historic Landmark in 1996.

The city requested that the Biltmore do an independent study to verify that it meets the luxury requirements established in the lease. The Biltmore partnered with Hotel Consulting International (HCI), based in Miami, whose managing director, Thomas O’Neill, did the analysis – he has 40 years of hotel operations, ownership, development and consulting experience.

“It was important for us to have confirmation of the condition and luxury level of that hotel and the promise for the hotel to continue to be successful,” said City Manager Cathy Swanson-Rivenbark. “Thomas O’Neill is a highly respected hospitality evaluation expert and so he conducted the review.”

The analysis found that the Biltmore is upholding its end of the lease by continuing to operate as a four-star luxury resort and there is minimal risk of losing its designation as a luxury hotel. But capital improvements are needed, the analysis said, to preserve its historic landmark status. They include window replacements, the 40-year recertification requirements, a roof replacement, balcony door replacements and renovated elevators. Replacing the windows alone is costing $5.5 million and will be finished by Dec. 1, said Gene Prescott, president of Biltmore Hotel Limited Partnership.

Other renovations that aren’t considered part of maintaining a historic landmark include hallway renovations, ballroom improvements, room renovations, digital signage and a new garage system.
The Miami Biltmore Hotel has a long history. Designed by Schultze and Weaver and built in 1926 by John McEntee Bowman and George Merrick, the hotel became the tallest building in Florida at 315 feet, holding the record until 1928 when the Dade County Courthouse was built.

It served as a hospital during World War II and as a VA Hospital and campus of the University of Miami medical school until 1968. It reopened as a hotel Dec. 26, 1986.
The Biltmore has been a special attraction. The movie “Bad Boys” and television programs like “CSI: Miami” and “Miami Vice” were filmed there. The 1977 horror film “Shock Waves” also used the hotel as a major setting when it was in a state of abandoned disrepair.

The Biltmore counted the Duke and Duchess of Windsor, Judy Garland, Bing Crosby, Al Capone and the Roosevelt and Vanderbilt families. Franklin D. Roosevelt had a temporary White House office set up at the Biltmore when he went on fishing trips in Miami.

Getting financial help from Miami-Dade County and the City of Coral Gables has happened before. In October 2001, the city commission voted unanimously to defer the Biltmore’s October and January quarterly base rent payments of $112,500 each. Low occupancy rates were draining the hotel. A year later, in October 2002, the Biltmore repaired the tower and cupola using $675,000 from the county and the city.

Just as happened last week, in 2002 then-Coral Gables Mayor Don Slesnick said it was fair for the county to share repaid costs because Miami-Dade benefits from the regional and international visitors who come to the historic hotel.

At last week’s commission meeting, City Manager Cathy Swanson-Rivenbark said allowing the Biltmore to use 50% of annual rent payments toward renovations was not a city expenditure but an investment.

“The product, from the point of view of a hotel, is tired,” Mr. Prescott said. “We’ve got more competition. Revenues were down 6% in 2017 but the market is up. We need to get our product better.”