Advertisement
The Newspaper for the Future of Miami
Connect with us:
Front Page » Arts & Culture » New Institute of Contemporary Art Leaders hail attendance 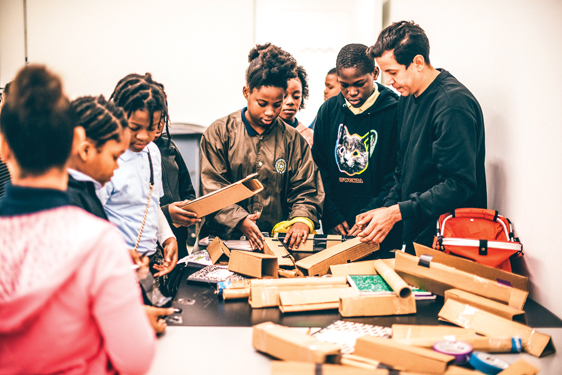 With two new leaders at the helm, the Institute of Contemporary Art, Miami has seen upwards of 50,000 visitors since opening six months ago and is looking forward to introducing new exhibitions and programming during the summer months.

“I am very proud to be the next artistic director,” Alex Gartenfeld said. “We are exceeding expectations for year one and have really seen an appetite here for more programming and exhibitions.”

“We have essentially tripled membership numbers since opening,” said Tommy Pace, the museum’s deputy director, “and feel that that the museum will continue to grow in both membership and attendance.”

As for the switch to new leadership, Mr. Pace said, “it was a very natural transition that was always a part of the plan.”

“Ellen Salpeter [the former artistic director of the museum] was instrumental in creating the structure for the museum and getting things up and running,” Mr. Pace said.

Ms. Salpeter, who joined the ICA before construction of the new museum was complete in December 2015, resigned effective June 1 to pursue other projects, according to museum officials.

Moving forward, Mr. Gartenfeld said, “we have been impressed and humbled by the response the public has had to the museum and look forward to implementing new programming.”

Currently the museum has 14 exhibits on display on the first, second and third floors, as well as outside in the sculpture garden and in one of the stairwells in the museum, according to the museum’s website.

Early this month “we had a packed house at Paradise Plaza,” Mr. Pace said, “where we had our First Fridays event, which was made possible by the museum’s innovation partner, MINI.”

During the “In Conversation with Diamond Stingily” event, Mr. Pace said, “a lot of people showed up to support the artist’s first solo museum show.”

As a result of the show’s success, he said, “we plan to publish a catalog of the artist’s works.”

As for other upcoming events, programs and exhibitions, Mr. Gartenfeld said, “We have our youth programs and schools and tours programs for children of all ages and also have our summer intensive 2018 program coming up in July, which will address the ways in which urgent climate issues and anthropogenic effects apply pressure to contemporary cultural production.”

In addition, he said, “this December we will debut a new exhibition, “Judy Chicago: A Reckoning.”

According to the museum’s website, the exhibit will “highlight Chicago’s iconographic transition from abstraction to figuration, and explore the ways in which the artist’s strong feminist voice transforms our understanding of modernism and its tradition” through a survey of works.

In addition to debuting new exhibits and programs, Mr. Gartenfeld said, the museum has also received grants from the Andy Warhol Institute to continue its work.

“We have received a great amount of support,” Mr. Pace said, “and are really looking forward to seeing the museum continue to grow.”Institute of Contemporary Art