Advertisement
The Newspaper for the Future of Miami
Connect with us:
Front Page » Communities » City fills out its roster to offer free Miami Trolley routes citywide 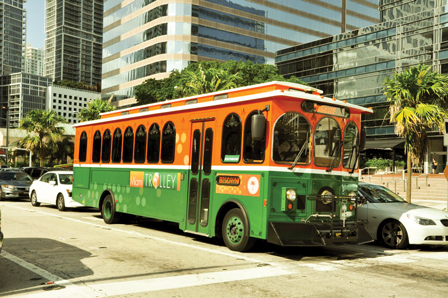 Miami city commissioners have given the green light to the final trolley route yet to be served in their goal of offering free trolley rides citywide.

Commissioners last week approved a new Miami Trolley route, expanding the service into the Flagami community, with a direct link to regional transportation at the Miami Intermodal Center (MIC), next to Miami International Airport.

The resolution was co-sponsored by Mayor Francis Suarez and Commissioner Manolo Reyes.

“Our plan to continue expanding our trolley system throughout the city has been a success, and the Flagami route is a great example of this,” said Mayor Suarez.

“We are committed to providing accessible and reliable transportation options to Miami residents to alleviate congestion and promote a better quality of life,” he said.

The new Flagami Trolley Route will have five new trolleys operating six days a week with service connecting major arteries such as Southwest Eighth Street and West Flagler Street to the existing Little Havana Trolley Route and other nearby neighborhoods.

“The residents of Flagami had expressed to me a need for better transportation in the area,” said District 4 Commissioner Reyes.

“The Miami Trolley will help many of them get to and from work and school, and run errands in the community while connecting them to surrounding areas,” he said.

The action directs the city manager to take all steps necessary, including an amendment to the city’s current agreement with the county to add a Flagami route to the trolley system that would connect with the city’s Little Havana trolley in the Flagami area.

When traveling east, the Flagami trolley will serve partial sections of Southwest Eighth Street, West Flagler Street, and Northwest Seventh Street to Magic City Casino and back to the MIC.

The city will buy five new trolleys for $1.75 million for the Flagami Trolley Route, and the operation cost of $1.2 million (excluding fuel) brings the total to $2.95 million.

There’s no charge to ride the city trolleys – rubber-tired vehicles designed to look like old-time streetcars – and from the onset of the program in 2011 city leaders have stated a desire to keep it free.

The Little Havana Trolley Route more than doubled boardings from 2015-16 to 2016-17, according to city officials.

A Little Haiti route was added in February, after the city received a $400,000 grant from the Florida Department of Transportation. The deal requires a 50% match of $400,000 from the city’s coffers.

The route could link with the Miami Beach Trolley, existing City of Miami Biscayne and Coral Way Trolley routes, the Metromover and Metrobus routes. The 9.67-mile route would roll seven days a week.

This proposal was on the city commission’s agenda last week but was deferred until July 26.