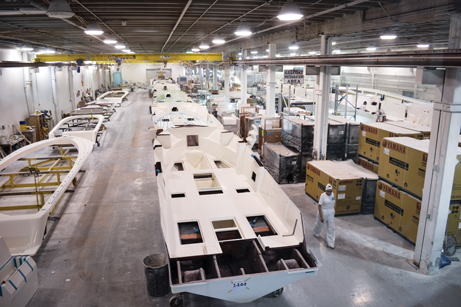 SeaVee Boats is probably two to three weeks away from receiving the final necessary building permits from Miami-Dade County to begin construction of its new facility, according to Ariel Pared, one of the three original business partners who bought SeaVee Boats in 1994. The county’s Industrial Development Authority fully financed the project.

SeaVee Boats will consolidate all five of its facilities around Miami into one at 11100 NW South River Drive in Medley. Currently, all five locations have 100,000 square feet combined.

The new 220,000-square-foot facility sitting on 10 acres will house all of the expanded operations to make manufacturing more efficient. Mr. Pared said it will be the largest boat manufacturing facility in South Florida.

“We originally bought our current facility thinking it would be large enough. But the economy is doing well, so the business is doing well,” Mr. Pared said. “We’ve outgrown the facility. We’re bursting at the seams right now.”

SeaVee Boats is currently able to manufacture 165 custom boats per year. With the new facility, the company hopes build 250 boats per year within three years, Mr. Pared said. The partners also want more square feet to build bigger boats. Once the new facility is open for operations, they plan to build a new 50-foot flagship boat.

“South Florida has been booming. People are looking for bigger, faster and more advanced boats and technologies,” Mr. Pared said. “Big boats are selling like never before.”

Jack Ellis, the founder of Info Link Technologies Inc., a marketing and data services company that watches the outdoor recreation market, found that flats, bay and inshore fishing boat sales are down at least 40%. Bigger boats are selling more. His data show overall boat sales have been on the increase the past seven years both in and outside of Florida.

However, Mr. Ellis said that he sees possible rough seas in the boating industry in the future caused by environmental challenges.

“The health of the boating industry depends on how you look at it. Generally speaking, most custom boat builders in Florida seem to be doing fairly well,” Mr. Ellis said. “That being said, another decline in boat sales is inevitable, and I’d be the first to admit that Florida’s deteriorating water quality certainly won’t help the situation.”

Mr. Pared and his business partners have faced several challenges in building on the new property. The Environmental Protection Agency put the property on the Superfund’s National Priorities List in 1984 and cleanup started soon after. Electrical transformers were recycled on the site, which led to waste oil being dumped into the ground and rusted machinery left on the property.

However, the land is slated to be removed from the National Priorities List in July, for a full return to industrial activity with no threat to health.

Mr. Pared also said that the county has been slow to approve the final building permit.

As soon as the final permit is approved, SeaVee will start building, Mr. Pared said. The chosen firm, TA Builders, estimated that construction could take 10 months. All the land is cleared and foundation permits were approved recently. SeaVee Boats hopes to be up and running in the new location this time next year.

Right now in its 60,5558-square-foot headquarters at 6900 NW 77th Court, smaller boats are backlogged 10 months and the larger models are backed up 18 months. Currently over 200 boats on order.

SeaVee now employs 220 people and hopes to employ 325 to 350 total once it moves to the new site. It started with seven employees in 1994, Mr. Pared said.

SeaVee Boats is building its brand-new facility, he said, because nothing already existing fit its needs.

“The most skilled workforce in boat manufacturing is in South Florida,” Mr. Pared said. “Not the most affordable, but we feel that because of the type of product we make – boutique and high-end boats – we’re able to spend more to build a better product.”