Advertisement
The Newspaper for the Future of Miami
Connect with us:
Front Page » Top Stories » Sales build for Miami’s luxury real estate 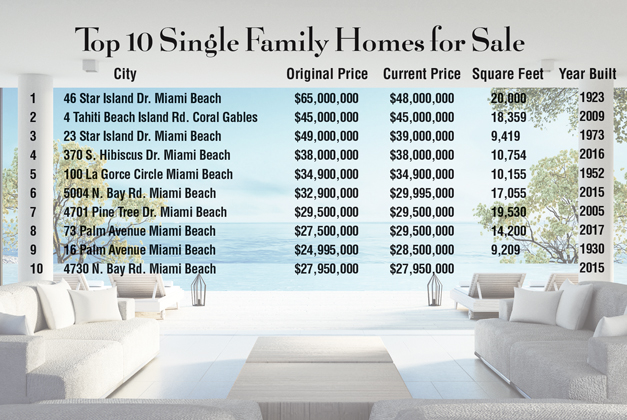 The crème de la crème of luxury real estate continues to sell like hotcakes. Homes and condos at the top 10% of the entire market show higher sales this year than last.

Ron Shuffield, president of EWM Realty International, sees a healthier market: “We’re starting to rebuild our level of activity. Our sales are up about 13% in Dade County in single-family homes sold in excess of $1 million in these last three months over the same three months last year, and 10% increase in condo sales over the same period last year.”

Mike Pappas, CEO of the Keyes Co., said about 2,000 houses are on the million-dollar-plus market. The homes average 150 days on the market from listing to signing a contract, with a median price of $1.8 million. The most popular neighborhoods with waterfront views include Coconut Grove, Cocoplum, and Miami Beach. These neighborhoods see 110 to 120 properties sold per month.

The boom in inventory shows developers meeting a demand for luxury high-rise living, with the market now listing 3,166 condominiums compared to 2,800 last year. The 30-month supply means about 100 condos are sold ever month, with each one lasting 50 days longer on the marketplace than single-family homes. Fisher Island, South Beach, Surfside and neighboring Bal Harbour remain popular choices among luxury buyers.

Ms. Eber said, “The ones that are getting the top prices right now have been the modern homes on open water. They are brand new or built within the year, and they have phenomenal views.”

Houses built in 2004 and, more recently, in 2015 to the present are the most in demand, according to Madeleine Romanello, Compass associate broker.

Mr. Pappas said, “The affluent buyer is looking for pristine conditions. Buyers want a turnkey home rather than having to do the work to get it to what they want.”

He said brokers rely more than ever on marketing tools to distinguish listings. Video and images captured by drones and photographers are critical for online portfolios.

“Using 3D imagery and walk-through ability is the new technique,” Mr. Pappas said. “It’s gathering a lot of interest from overseas and through the local market. We are a worldwide destination. You need to present the property appropriately to the world.”

“A lot of the condos come with furniture package so that people can go turnkey,” Ms. Romanello said. “The developers aligning themselves with interior designers putting it all together, make it look amazing and then of course the property sells better and the buyer gets what they want.”

Ms. Eber also sees plenty of Brazilians moving to the Magic City: “The Brazilians were out of the market for quite a while and now you see that they’re starting to come back, and I see Italians there as well and Canadians. It’s been healthy.”

Elections in Mexico and Turkey motivate some natives to take leave, and despite the political turmoil as well as tanking economy Ms. Wang often sees Venezuelans moving to town.

But domestic buyers from California and the Northeast are outpacing foreigners.

Ms. Hertzberg said, “People from high-tax states always fueled our market, but much more so now that we’re seeing the people from the Northeast, whether it’s Boston, California, Connecticut, the Hamptons and New York. The biggest deals have been done with American families that are from the Northeast corridor or from California.”

Her buyers range from 30-somethings to 80-somethings in age and usually own their own business or work in finance. She said, “I think technology, computers, the Internet has allowed so many people to change. It used to be that the person who owned the company would have to physically go into their company, but now you can run a lot of businesses being in Miami. Technology has allowed a lot of businesses to be flexible.”

Ms. Wang says the tax reform motivating many: “In the Northeast, you have city tax, state tax, federal tax. In comparison to Miami, we only have the [federal] income tax.”

He says the majority of the top 50 properties with the highest price tags show sellers rarely budge in the beginning: “Very few of these sellers have reduced their prices. If they were to reduce their prices in line with what they will ultimately receive, they would sell their properties much faster.”

And realtors say there is always room for negotiation. For example, Ms. Hertzberg says that this year the Jills sold high-end properties from $17 million to $20 million, with 15% selling lower than the original asking price.

Mr. Pappas said, “It’s the pendulum of pricing that if the price is x and you’re 20% over x, then buyers will have to come in and offer 20% under x to try to balance you out.”

Predictions for coming months are positive. Ms. Wang said, “We still have a lot of cash transaction on high end but the interest rates climbing up and also the tax reform certainly improve the market condition.”

One Response to Sales build for Miami’s luxury real estate