Advertisement
The Newspaper for the Future of Miami
Connect with us:
Front Page » Opinion » Boring tunnels may be only total solution at Brickell Bridge

Boring tunnels may be only total solution at Brickell Bridge

Frictions are ripping scabs off the sores of a downtown divided by a river that takes ever-longer to cross. The longer it takes, the worse the frictions as agencies grapple with how and when to apply band-aids.

Last week the Miami River Commission yelled foul, fuming that though it has broad responsibility for the river it was left out of the loop when others seemed to agree how and when to open the Brickell Bridge to balance shipping, boating, automotive, bicycle and pedestrian demands.

That balancing act at the bridge is hard: when landside users move, river users sit, and vice versa.

While Miami River navigation was the original reason to create a city at its mouth in 1896, crossing that river has become increasingly difficult for decades.

As Miami was en route to big city status with Florida’s 1920s land boom, it built a bridge in 1926 to link its young downtown to the single-family housing area that we now call Brickell and go beyond to Coconut Grove. The roadway remains US 1 – our first national highway.

But by three decades ago Brickell Bridge openings to allow for commercial and pleasure river traffic had become more than mere nuisance. A larger bridge was vital and a design competition for what we’d now call a signature bridge was held, but then abandoned when funds ran short.

Nonetheless, the old bridge was cranked up for the last time 25 years ago this summer and speedily dismantled for a wider and taller bridge that would handle more cars and allow more boats to pass without having to raise the bridge.

Nonetheless, year by year that new bridge proved less adequate, because each year Miami’s population grew, visitors increased, taller and denser developments arose on each side of the river, and performing arts centers and museums and arenas were built downtown, requiring more cars to get to and from the area.

This has led the Miami River Commission, Coast Guard, Miami’s Downtown Development Authority, the Marine Council, Florida Department of Transportation and others to seek silver bullets that would blast down barriers to both land and river traffic.

Among suggestions have been to reopen closed bridge lanes to cars, install pedestrian gates and add security officers to keep pedestrians from crossing the bridge well after warnings, add signs to warn approaching motorists when the bridge was going to open, tinker with times when the bridge is locked down to prohibit boat traffic, restrict valet parking at nearby buildings, get the Coast Guard to better enforce its own rules on bridge openings, have bridge-tenders obey the rules on passage of vessels and far more. 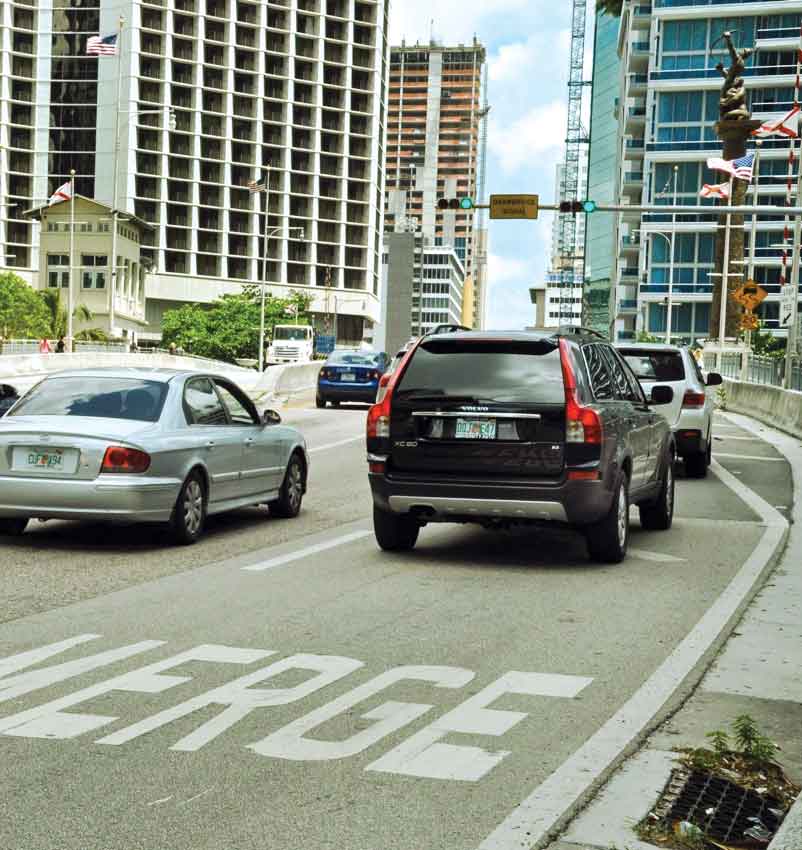 Lanes are reduced as cars roll onto bridge.

Four years ago, we suggested means to change the habits of drivers, getting more of them out of cars and onto Metrorail and the free Metromover, both of which could roll smoothly from one side of the river to the other no matter how often the bridge was raised to allow marine traffic to pass.

We suggested distributing dining discount cards in both downtown and Brickell as riders stepped off trains. Businesses would in effect reward transit use instead of automobiles, unclogging lunchtime streets in the bargain.

We also suggested active county marketing of transit to the thousands of new residents of Brickell and downtown – or, in fact, any marketing that would shift drivers onto the rails.

But the opposite occurred: we had no effective marketing. Instead of getting downtown drivers onto transit, transit riders have gone back onto roads in droves, whether in their own cars or Ubers or municipal trolleys.

Since October 2014 when we suggested Metrorail and Metromover use to alleviate Brickell Bridge traffic, monthly Metromover ridership has fallen 3% and Metrorail use has plunged more than 11%.

Any marketing efforts now seem to be awaiting on-order Metrorail cars and CNG buses, so the patchwork of band-aid solutions at the Brickell Bridge is the only near-term prospect. Even those bit-by-bit temporary fixes will require teamwork.

For the longer term, we know of nobody working on above-ground mobility at the critical sticking point at the river’s mouth. Nobody is floating plans for aerial gondolas or additional bridges or anything else.

With a vital problem escalating in a growing metropolis and no answers on the horizon, it’s time to take seriously a tunnel under the river near the Brickell Bridge. Miami Mayor Francis Suarez has been championing such a solution, which many have dismissed as decades too late.

It’s true that tunnels are costly, would take years even if we had the funds, and require entry points in areas that are now heavily developed. But relatively new twin Port of Miami tunnels prove the viability of underground boring here.

We didn’t dig tunnels decades ago, when land was available. Now may in fact be too late, though new technology should be explored.

But we already know that all the band-aids we find today to alleviate Brickell Bridge traffic will get ripped off again as population and development expand.

Downtown and Brickell feel more like Manhattan every day. Like Manhattan, we might be forced to turn to tunnels under the city center if we want to keep moving.