Advertisement
The Newspaper for the Future of Miami
Connect with us:
Front Page » Transportation » Miami-Dade’s Aviation Department hit by short-term parking deal 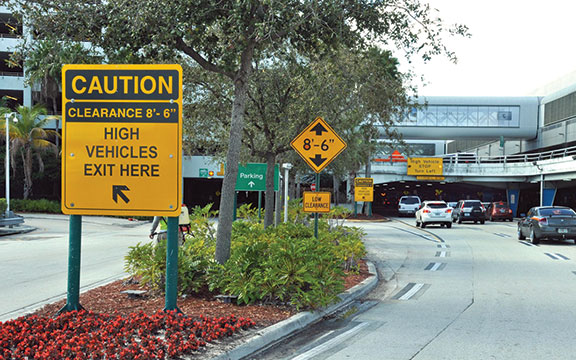 While Miami-Dade’s Aviation Department looks into new payment technology to use in its garages, commissioners at the Economic Development and Tourism Committee last week recommended extending the existing parking system contract until a replacement is secured.

“We’re looking at using the SunPass system so we wouldn’t need credit card processing and there wouldn’t be lines at the parking garages,” said Aviation Director Lester Sola. “In the meantime, we exercised this contract with the existing vendor.”

The existing system, managed by Conduit Transport Solutions, is old and the aviation department says it needs to issue an emergency purchase of $541,000 to replace “end-of-life lane computers, server components, operating systems and associated hardware to support the system,” the legislation says.

Without the replacement technology, the airport is at risk of having a parking system failure.

In addition to the risk of system failure, the department says that customer service levels have declined, as there are long wait times at the exit during peak hours.

By extending the contract, the county foregoes the formal bidding procedures to create a prequalified pool of vendors to provide the services.

“Have we looked at the market to see what new technology has come out? Maybe we can save money and do better,” Ms. Sosa told Mr. Sola at the meeting.

Mr. Sola apologized for coming to the commissioners with the request, saying “there is no reason to be before the committee with this item.”

He committed to an expedited process with a new solicitation for competition, but said these services are needed immediately.

The department is also to look at new technologies like the SunPass system, Mr. Sola said.

Mr. Sola stressed that this would be the final extension, saying the vendor also wants to get out of the contract.

“They are also looking to get out of this business. We just need to secure the services as we transition,” Mr. Sola said.

Ms. Sosa agreed to support the formal bid waiver and $541,000 allocation, but asked for a strict deadline of 90 days.

Mr. Sola agreed to the timeline, saying, “We may be able to do it quicker.”

The Economic Development and Tourism Committee moved the item forward to the county commission meeting May 1 for approval.

Mr. Sola is also to bring back an update on the expedited procurement process for the new vendor to the next committee meeting May 10.