Advertisement
The Newspaper for the Future of Miami
Connect with us:
Front Page » Top Stories » City seeks to retain National Oceanic and Atmospheric Administration 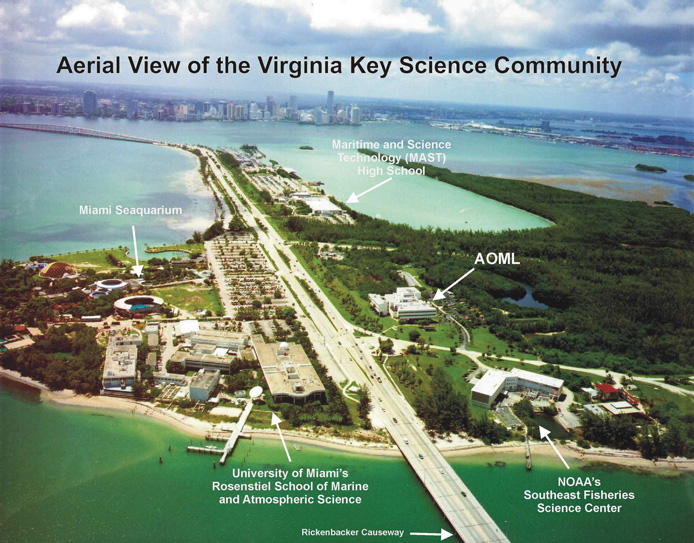 Miami city commissioners are urging the federal government to retain the National Oceanic and Atmospheric Administration (NOAA) Fisheries Headquarters at its current location on Virginia Key.

NOAA is reportedly considering relocating its Southeast Fisheries Science Center to St. Petersburg because the fisheries center on Virginia Key is outdated and needs improvement.

NOAA’s facilities on the barrier island have a long reach and impact the local community in many ways, officials say.

NOAA’s operations at Virginia Key are performed in concert with research and teaching functions at the University of Miami’s Rosenstiel School of Marine and Atmospheric Science, which is directly adjacent to the NOAA campuses.

City of Miami Mayor Francis Suarez and Commission Vice Chairman Ken Russell are co-sponsoring a resolution urging the US Department of Commerce and the National Oceanic and Atmospheric Administration to retain the fisheries headquarters on Virginia Key.

The commission unanimously adopted the resolution recently, and the Key Biscayne village council approved a similar resolution in February.

Miami’s resolution further urges Miami-Dade County, the University of Miami, the UM Rosenstiel School of Marine and Atmospheric Science, Florida International University, members of the South Florida congressional delegation, the Miami-Dade County legislative delegation, and others “to advocate for and take other affirmative steps to promptly address NOAA’s needs and encourage and enable NOAA and its Cooperative Institute for Marine and Atmospheric Studies to maintain their full presence and mission on Virginia Key.”

The Virginia Key venue for NOAA is home to two facilities.

The Southeast Fisheries Science Center (SEFSC) is responsible for scientific research on living marine resources that occupy marine and estuarine habits of the continental southeastern US, as well as Puerto Rico and the US Virgin Islands.

The fisheries center is one of the six national marine fishery science centers responsible for federal marine fishery research programs and is the primary provider of research on fisheries and habitats for Biscayne National Park and the Florida Keys Marine Sanctuary.

The total annual budget for the SEFSC Miami Lab ranges from $15 million to $17 million, the bulk of which supports salaries for about 170 masters and Ph.D. level scientists and researchers, according to Miami’s resolution.

The fisheries center works to protect South Florida’s coral reefs that have an estimated value of more than $4.4 billion and is directly associated with more than 70,000 part-time and full-time jobs in the area, it says.

NOAA’s Cooperative Institute for Marine and Atmospheric Studies (CIMAS) funds and coordinates scientific partnerships with the UM Rosenstiel School of Marine and Atmospheric Science (RSMAS), Florida International University, and other university programs in South Florida to educate the next generation of scientific leaders and collaboratively work on pragmatic problems of societal importance.

“Leveraging their shared mission and physical proximity for decades, scientists and staff involved in NOAA’s operations at Virginia Key have served as adjunct faculty, research assistants, and other venture partners with RSMAS faculty and students to support and expand RSMAS’s educational mission,” the resolution says. “This collaborative effort engenders extensive working relationships between NOAA and RSMAS and catalyzes significant research and knowledge advancement opportunities directly related to the City of Miami’s sub-tropical marine environment.”

“The city considers it a materially adverse development for NOAA to relocate SEFSC or any other fishery headquarters, which would set back pending research dealing with critical local issues such as hurricane intensity, weather research, fish population sustainability, and coral reef health, diminishing the Greater Miami area’s standing for future investments and compromising the reliability and effectiveness of future collaborations between NOAA and RSMAS,” the resolution concludes.